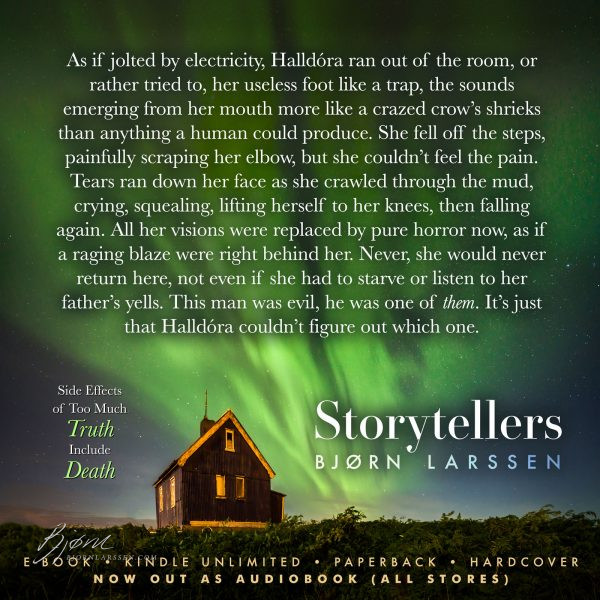 A blog tag means multiple bloggers writing about the same subject, tagging others to continue. I’m months late (see the previous post for the reason) and never take part in blog tags (because I am always months late even without burnouts). This is a topic dear to me, though: why I decided to go the indie route. I was tagged by Raina Nightingale and the original idea came from Indie Author Blog Tag by R.M Archer.

Why do you publish Indie?

I’ve spent 26 months writing what eventually became Storytellers. In the first year or so it didn’t occur to me to even think of any option other than the agent-editor-publisher system; I wasn’t aware that self-publishing progressed past dinosaur erotica, to be honest.

I’ve spent most of 2018 researching the legacy (“traditional”) publishing vs indie, and the more I learned, the less excited I was about it. Like many aspiring authors, I thought that I’d get a marketing team to sell my books while I sat in my cabin in the woods, Creating Art. Unfortunately, this is not how reality works. First, debuts don’t get marketing budgets – the publisher will pick 1-2 books per season to give them that push. Those will be the stellar (or not) debuts you read about in the papers. But the same publisher actually puts out 400 new books (random number, not far from the truth, though) during those few months. Those authors rarely see money other than the advance – and in 2020 “zero advances” became a thing that means exactly what it says.

Yes, the “real” books are the ones that will make it to “Guardian’s Top 20 Most Anticipated Novels of 2022” – which won’t list a single indie. (My bet is that this will change within five years.) But top 20 only fits 20 books and most publications tend to list the same 20 books, just in different order. Those are the books that have enough of marketing budgets for the interns to send review copies around. (Did you know that when an author gets a traditional deal the interns might send review copies?)

I don’t have this sort of validation, but I have control.

I can decide to take a book down when I finish this blog post. (Nyahahaha.) Or republish it with a different cover, title, pen name. Fix typos. Add new typos (why not? you only live twice!) Change the endorsements on the cover. Send review copies around or not. Postpone the release, because I literally can’t deal with deadlines due to health reasons, and not be terrified that the publisher will reply with “don’t bother then.” I can decide to do literally anything. And my books will never go out of print until/unless I decide they should.

(Speaking of which, if you want the current Creation paperback, you have a few weeks left to buy it – it will be replaced with a more expensive hardcover.)

Every mistake is mine, and I might be making one with the Creation hardcover I just mentioned, but so is every success.

I don’t have to live knowing that my book baby has been graced with a cover I would pay to unsee. I write in UK English, because this is a choice I have made. My editor is paid to help me create the book I want to put my name on, instead of me having an editor telling me I must change X or the book won’t come out. When I signed a traditional deal (I decided to) for the Storytellers audiobook, I designed the cover, approved the narrator, and not a single word has been changed in the book. I had that control because of the decisions I have made earlier.

My next release, Wisdom, is the sequel to Creation, which will most probably be followed by a m/m romance set in Reykjavík – yup, I’m going back home. I mean, to Iceland. Because I can.

This feels so unfair, because most of the books I love best are only standalones due to the fact that the sequels are not out yet. Which is one of the reasons why I love them – I get more! I’m going to slightly cheat and go with Empire’s Heir by Marian L Thorpe, which technically is a part of a series, but works as a standalone. Lisette Brodey’s Hotel Obscure is a novel in stories and while a second similar book came out this year (The Waiting House) it’s not a sequel. See? Not cheating at all.

Well, now I can’t say anything about Marian L Thorpe, because I listed her as a standalone. I’ll go with Jacob Sannox’s The Return of King Arthur, because it showcases what I love about indie releases: it’s wild. Not as much Arthurian fantasy, because it’s not a re-telling. It’s what happened later. Between the fifth century and 2021. Sometimes it’s a thriller, sometimes urban fantasy, sometimes historical fiction, and I don’t mean per book, but per chapter. I never knew what would happen next. No trad publisher would touch a book like this with a long pole, because it has no clear and easy marketing angle – it’s hard to figure out which shelf to put it on in a bookstore.

Which is what makes it awesome.

Which is why I read indie.

What is your most anticipated Indie release?

Quenby Olson’s Miss Percy 2 (I’m not sure what the final title is going to be). The first instalment, Miss Percy’s Pocket Guide (To The Care And Feeding Of British Dragons) swept me off my feet – Lucy Maud Montgomery working with Terry Pratchett on a book with dragons in it? Yes, please. I hear she’s already working on book three and it’s really hard not to accidentally tell her to hurry up eight times a day.

What is your most recent Indie read?

I’m currently reading PL Stuart’s The Last of the Atalanteans, the second book in The Drowned Kingdom Saga (it’s not out yet – the fun of being an indie is that I often get to read books before they’re even ready for release by simply pestering the author long enough!) I also started on Virginia McClain’s Victoria Marmot and the Meddling Goddess, which opens with Victoria and the Goddess (named Gwen) arguing which one gets to narrate the book! I have an unfortunate habit of buying two new books every time I finish one, so I don’t know the answer yet – I’m taking part in #FebruarySheWrote, though, meaning I’ll only read books by female-identifying authors. I’ll be reviewing Victoria (and Gwen) on Goodreads.

What is your favourite part of being an Indie author? 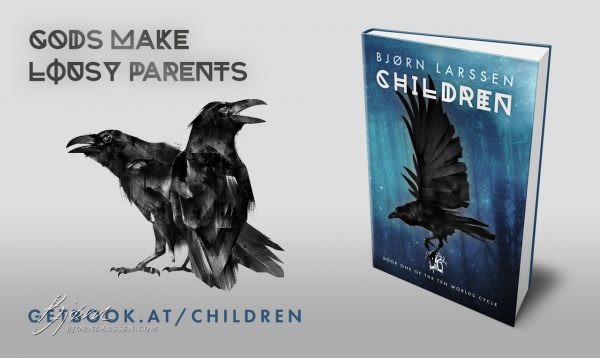 Creating the visuals. My career as a graphic designer has been over for a decade now. I still like making pretty things, though. This means not just the cover art, but banners, animations, website (I wouldn’t mind someone updating the website…) – all looking exactly the way I want them to. I don’t have to fight anyone but Photoshop to get exactly what I want. Oh, the sweet, sweet control.

What’s the hardest part of being an Indie author?

There are hundreds of thousands of books published every year. That’s in addition to ones that are already there. In order to sell books I have to find a way to let people know they’re there – balancing the line between “oh, I published a… you probably don’t… anyway… please ignore me” and being an obnoxious person who does nothing but yell in your face “BUY MY BOOKS NOW.” And I need to sell books, not for fame and recognition, but because editing, proofreading, cover illustrations, proof copies, Amazon ads, blog tours, even this website – everything costs money.

A legacy publisher provides all those things. I might hate the result, but I don’t pay for it. That publisher may then decide one day that I don’t sell enough books and drop me. They will often keep the rights to the books they have published, then taken out of print. It’s great fun when it happens after the second book in a trilogy. In order to get those rights back I’ll have to sue the publisher. (Don’t get me started on how difficult this is when the publisher themselves goes out of business and someone acquires those rights…)

As an indie, I am a business. I can’t get dropped by anyone. Where the publisher might decide I am no longer worth investing in, though, I may one day look at my bank account and realise I can’t afford to justify spending more money that I am not getting back. Perhaps I can save some money by not using a proofreader and hoping for the best. The best course of action, though, may be spending what used to be my writing time stocking shelves at a supermarket. (I hope I don’t have to explain that this is not an insult towards people who do exactly that for a living…)

One of the reasons why so many authors have a ko-fi or Patreon page is steady income. Even if it’s not much, it’s monthly, and it accumulates. My ko-fi subscribers essentially paid for the cover of Wisdom, and this is why they can download part one of the book for free 2.5 months before its release.

Lots of readers and even authors still believe that self-publishing means failure at getting a “real” contract. It is something of a rite of passage to brag when you receive your 100th agent rejection. I have never received any, because I never tried to find an agent. I’m glad to see the “failure” perception slowly changing, and sad about the “slowly” part.

I decided to go the indie route, did my research on the business and marketing part, invested in editing, proofreading, etc., and knowing what I know today I would do it all again. I will, when Wisdom comes out. The only regret I have is…