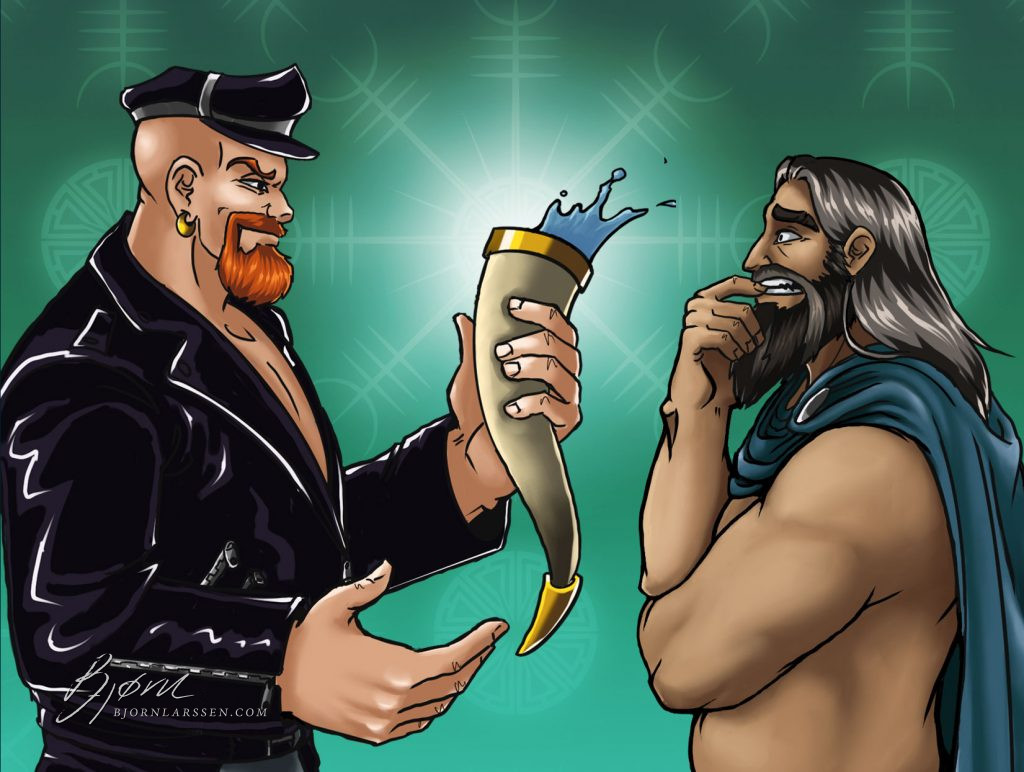 My upcoming book, Why Odin Drinks – a collection of four novellas, including Creation – is what would happen if Terry Pratchett, Douglas Adams, and Hobbes – of the Calvin and Hobbes fame – decided to tackle Norse mythology. It’s sometimes bittersweet, because Pratchett; absurd, because Adams; and thoughtful, because Calvin and Hobbes. I aimed at writing a book that could be read on various levels – from cackling at peeing dispensers and Odin’s masculine wiles to contemplating various facets of the human condition.

Then reality went and up-ended my proportions somewhat.

Out of the four novellas, Creation is about life; Loki Runes Everything – about control; Fashionteller – about consequences of knowing too much about the future. The last story, The Well of Wise Dom takes a look at greed. What happens when you understand too much, know too much, predict too much, try to control the outcome, change the inevitable? This is what happens, apparently:

“All-Father…”
Odin smirked, the wrinkles around his lips deepening. “I was too stupid to know that I was right. You need to start wars to end them. Sacrifice lives to save them.”
“This isn’t…”
“Frigg will tell me what I need to know,” Odin said coldly. The knuckles of his bony hand, gripping the staff firmly, whitened. “The only way to stop a great army is to have an even greater army. I will know what and when to expect. I will be there.”
[…] “That can’t happen!” Mímir erupted. “When you stir wars, they’ll lead to bigger wars. The more deadly weapons one side uses, the worse the other will invent.”
“Exactly,” Odin nodded. “I’ll lead the leaders. I’ll outwit the wittiest. And I’ll always have the best, the strongest, the hardest.”

Three days after I sent the final version of the book for proofreading, Russia invaded Ukraine.

How are we supposed to understand this at all?

Someone who is very decidedly not Odin and did not drink from the well of wisdom decided he’d start a war to end it – with his own victory, of course. What other ending could there be? Odin knows the answer. An even greater army must push back, its weapons more powerful, numbers bigger. How could the attacker respond to that? In my book, like in the Norse lore, Odin aims for creating the greatest of the armies, an army of the dead. All of a sudden humankind seems determined to do the same.

My Mum and I skyped on Saturday. We forced out chuckles about old women she had seen earlier that day, buying out all sorts of dried foods, beans, rice, groats, and so on. Both of us knew this wasn’t really funny. Some of those women were born either during WWII or right afterwards. They know. For someone like me or my Mum, it’s something we gasp at, empathise, talk about – it’s horrible what’s happening in those other places far away. Here, in Europe, it would – will – could – should never happen again.

Sure, the alt-right have been trying to destroy that unity we worked for so long. They organised rallies, bought ads on Facebook; in the case of Poland and Hungary the governments turned the public media into propaganda tools. But nobody expected tanks and guns and bombs. The fights over funding and legal matters took place in pretty rooms, where ugly people in expensive suits signed embossed papers. Words like “nuclear weapons” or “blitzkrieg” or “world war” belonged firmly in the past. We’ve learned.

“You can never control greed…!”
Odin snorted. “You can offer more and feed bigger greed. My army won’t be burdened by limits. I don’t need you or Madame A in it, because you have scruples. My army won’t have scruples. I like you, but if I decide you need to die, you’ll die.”
“That’s honest,” said Mímir weakly.

That was going to be it, and that was what I was writing about; I have a story planned where Odin understands that Ragnarök will not be fought with guns and rockets.

What do I do now?

I literally worried myself sick this weekend. I was holding up, just about, until I had this chat with Mum. An hour later I had a high fever. My stomach was doing things you don’t need to know about. I couldn’t eat or drink. I did not get any real sleep on Saturday night despite sleep meds. As I’m typing this on Monday I’m still mildly feverish with 0 minutes deep sleep total (I’m slightly obsessed with sleep, because my bipolar requires that I get enough of it). And I live approx. 2,000 km away from Kyiv.

My family and friends live much, much nearer.

I asked my brothers how they are feeling, because I know the media loves to jump on a somewhat scary topic and blow it out of all proportions. Not this time. My brothers feel the same way I do. A week ago my biggest problem was whether I’d get the hardcover proofs of Why Odin Drinks in time. On Saturday, when I found out Mum was going to a spa for a week, I quietly wondered where that spa is on the map and if she’ll be safer there than at home.

I’ve been avoiding the news in the last two years (I’m aware that in itself is privilege) because my mental health has been – to put it mildly – already shaky. I’ve spent those two years working on my PTSD, since it turned out I’ve had a very interesting life. Since Thursday I’ve been glued to news websites, refreshing everything every ten minutes. My therapist doesn’t know what to tell me. Nobody knows.

This is not helping me. It’s not helping anybody. It explained something about my PTSD, namely that my subconscious will work hard enough to suppress the traumas that I’ll get physically sick, but I already knew that. What can I do that will actually make people feel better?

Perhaps the only answer is “make them laugh.”

Why I wrote “Why Odin Drinks”

In all honesty, it was going to be more slapstick and less seriousness. Lyra Wolf suggested, having beta-read Creation, the first novella, that I should explore the philosophical side of my writing. That changed everything. Peeing dispensers and ass-thetics aside, I started asking questions, and the Gods answered. It’s a very funny, very serious book about consequences of the choices we (if we happen to be Gods) make.

In an interview with Witty and Sarcastic Book Club about comedic fantasy I said:

What is the best thing about writing comedic fantasy?

Laughing at things that are not supposed to be laughed at. I have lived through the final years of communism in Poland. No matter what the church-pleasing politicians would want you to believe, communism has fallen because there was no food. You can live without freedom, you can’t live without food. There was a movie director, Stanisław Bareja, who managed to make that funny. His humour was so subtle that it got past the censors, because they knew he was doing something they should demand he changes, but they couldn’t figure out what. It was the humour that carried the people though those years.

I still believe that. It’s just that it was easier to think it when I was giving an interview and remembering things that happened 35 years ago. 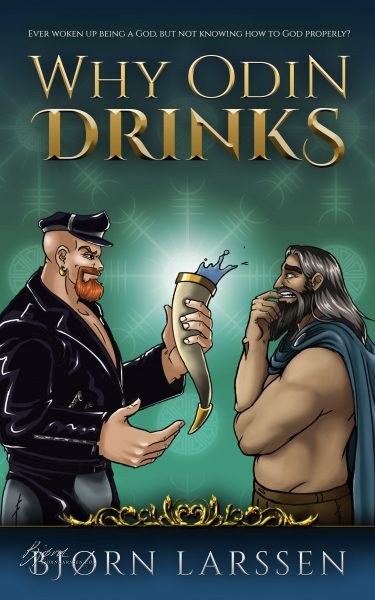 I’m not a politician. With my list of diagnoses nobody would allow me to get near a gun (this is not a vision I expected to “entertain” EVER). Ultimately, I’m an entertainer. I’m a serious comic. The only statement I can make is go on doing what I was/am doing. Laugh with my Mum, even if our teeth are clenched and eyes oddly moist.

My new book, Why Odin Drinks, is out on April 1. The timing is, as it turns out, painfully good. You can preorder it at https://www.books2read.com/whyodindrinks. What will I be doing in the coming weeks to avoid worrying myself sick? I’ll be working on What Odin Drinks, the sequel. Which also touches upon some inconvenient truths, such as “history is written by the winners.” I would like to be excluded from the narrative in which my timing is right again.