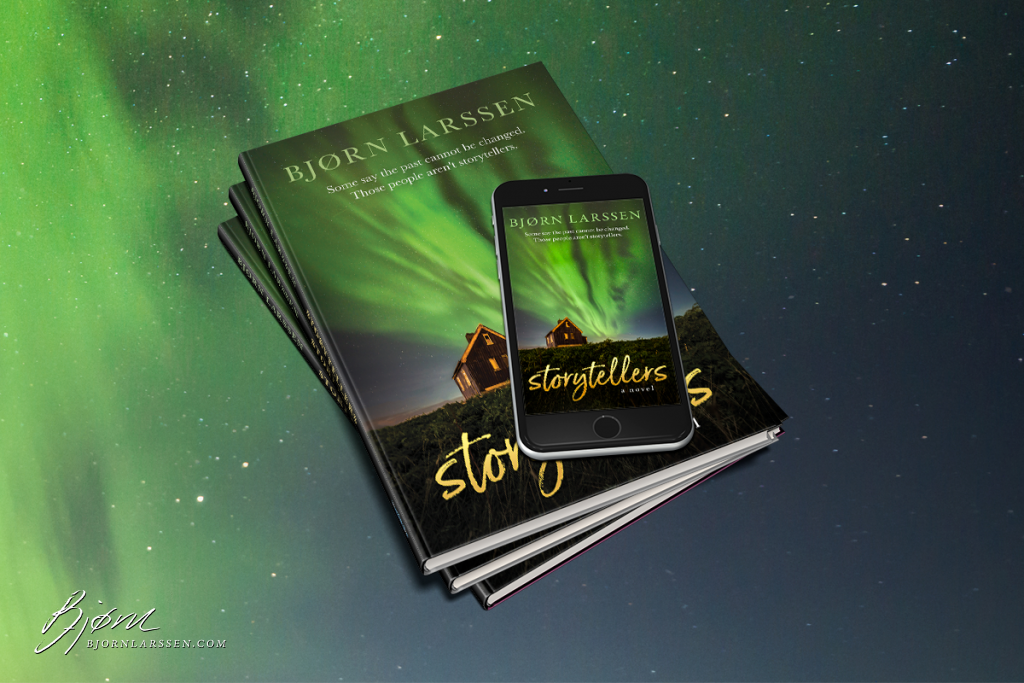 I spent most of the day searching for the links at various online stores, then updating the “buy” page on www.storytellers.is. Discovering that at least half of the non-Amazon stores renamed me to Bjrn. Emailing them requesting a correction. Shaking and crying a bit. Finding out that Amazon decided that the paperback was a travel guide. The e-book was #1 in “History of Iceland” section, which made at least some sense. I was rather upset by the travel guide thing, though, until I saw Good Omens topping the “women’s memoirs” section. Amazon is a mysterious creature.

Once I felt that everything was in place, then checked it 45 times, I found a page with statistics for Kindle Unlimited. KU is Amazon’s program, where a reader can pay a certain amount of money a month (is it $9.99?) in order to access all the books enrolled in Kindle Unlimited. The Amazon statistics page displayed the amount of pages read, updated every hour. I found myself refreshing this page twenty times a day to see how it was going. I couldn’t see who was reading, obviously, or whether those 500 pages meant that one person finished the book or ten of them gave up after the second chapter, but I couldn’t stop myself from excitedly wondering – did this person get to the plot twist yet? Who is their favourite character so far? Do they like the elf? It was a bit like being a theoretical stalker. The one thing I didn’t know was whether people were actually liking the book.

I believe that authors can be divided into two groups. Those with impostor syndrome and those who don’t care as long as money rolls in. (This includes plagiarists.) My biggest fear was that I have spent more than two years and a lot of money slaving over a book that was objectively bad. Not that the readers would dislike the genre, find the novel’s pacing too slow or too fast, not relate to the protagonists, but simply that it was bad bad.

Actually publishing a book means that your book-baby is now going to be read by strangers, who don’t care how long it took you to write the novel, how hard you’ve thought about the opening sentence, how many rounds of editing it’s gone through, etc. What the readers want is an escape, a good book showing them lives they never experienced, keeping their attention until the last page. I have never taken a break from reading a book to mutter “this is making my eyes bleed, but I know the author spent a long time working on it, so I must enjoy it”. Some people can write a masterpiece in three months. Some spend ten years writing something that’s plain awful. I was so scared that I produced a very elaborate turd that I actually considered hiring someone to read my reviews, so I wouldn’t have to see them.

I am not joking. Not even a bit.

When the reviews started to appear, especially ones from people I didn’t know… I’ve seen so many writers use the word “humbled” when talking about the reception of their book. I wasn’t humbled. I was both terrified and convinced that this was some sort of an elaborate joke. I hoped that once I would reach a certain number of reviews written by people coming from different countries, continents, ones I knew and didn’t know, the impostor syndrome would have to give up.

It kind of squeaked a few weeks ago when the positive reviews started to pour in. My freedom was short-lived, because the impostor syndrome briskly moved on to repeatedly informing me that the second book I’m working on is crap.

The most interesting part of reading the reviews is finding out how people who – unlike me – haven’t gone through the book 500 times or more felt about it.

I could draw Gunnar’s house for you. Show you the exact shade of paint used in the kitchen. Tell you what his sweaters looked like. I could tell you why Gullveig always wore identical black dresses and what hid in The Black Room. I know what the inside of Bjarni’s house smelled like, what Doctor Brynjólf’s curtains looked like, what he ate for lunch on that special day, and so on. But when you live inside a book for over two years, you lose the ability to objectively judge and describe it. This is why so many authors, myself included, struggle so much with the answer to the question “what is your book about”. Er, um, about… there’s Iceland in it… and a blacksmith… and stories… and eh… it’s got a lot of history things and stuffs in it… oh, and an elf…

When Terry Tyler wrote in her review “The gossip and atmosphere of small village life reminded me of a Jane Austen novel, subtly and amusingly executed as it is” I died and went to heaven, because I adore Jane Austen and that was exactly what I quietly hoped to achieve. Justine Bergman wrote “Storytellers is a tale of evading the darkness, bearing with the pain of tragedy, and living to see the sun rise another day” and I thought – oh! Is it? Wow, that’s so cool! I’d read that! Marian Thorpe – “The book was reminiscent of Kazuo Ishiguro’s The Buried Giant, in both theme and mood. Both books deal with the unreliability of memory; both are largely melancholy books.” I thought I knew the name Kazuo Ishiguro, so I looked him up and discovered he won a Nobel Prize for literature.

Megan, the editor, could tell you how many times I changed my mind regarding what the book’s theme was, what the mood was supposed to be, what I wanted to either emphasise or disguise. At some point I honestly lost track, focusing on the technical aspects – pacing, setting, wording, rewording, characters… I needed the reviewers to tell me what I wrote. This also isn’t a joke.

Meh, “I couldn’t have done it without you” is such a worn-off phrase, but really, I couldn’t.

Every e-mail, every review, each like on a post on my FB page, each interaction on Twitter thrills me. Seeing my book marked as “to read” on Goodreads – both amazing and terrifying, still. A Q&A session with a book club, my terror that nobody will bother asking any questions, then discovering how many there were – incredible. Nearly missing a train because I was busy signing my own books until the last moment? Stressful, but PRICELESS.

Thank you for giving me your time of day and picking my book over millions of others. Thank you for reviewing it and/or mentioning it to your friends. Thank you for each picture (I received so many!) of a reader holding the book – those hardcovers are stunning, right? Thank you to Amazon, godsdamnit, as even with its 123456 quirks it has allowed me to put my book-baby in your hands. Thank you to Ásgeir, whose music caused all this to happen. Sorry about that thing Arnar said about you. I hope you’ve enjoyed the book and sorry I couldn’t give it to you in person.

I’ve been working on multiple second books for a year now. Today I finished the eighth rewrite of the first draft of what will most probably be my second novel. More about that next week. Tonight I’m going to drink champagne (tea), raise a glass (a mug), say “skál” to myself, then refresh the Kindle Unlimited page again and wonder whether the current reader or readers already got to the plot twist.