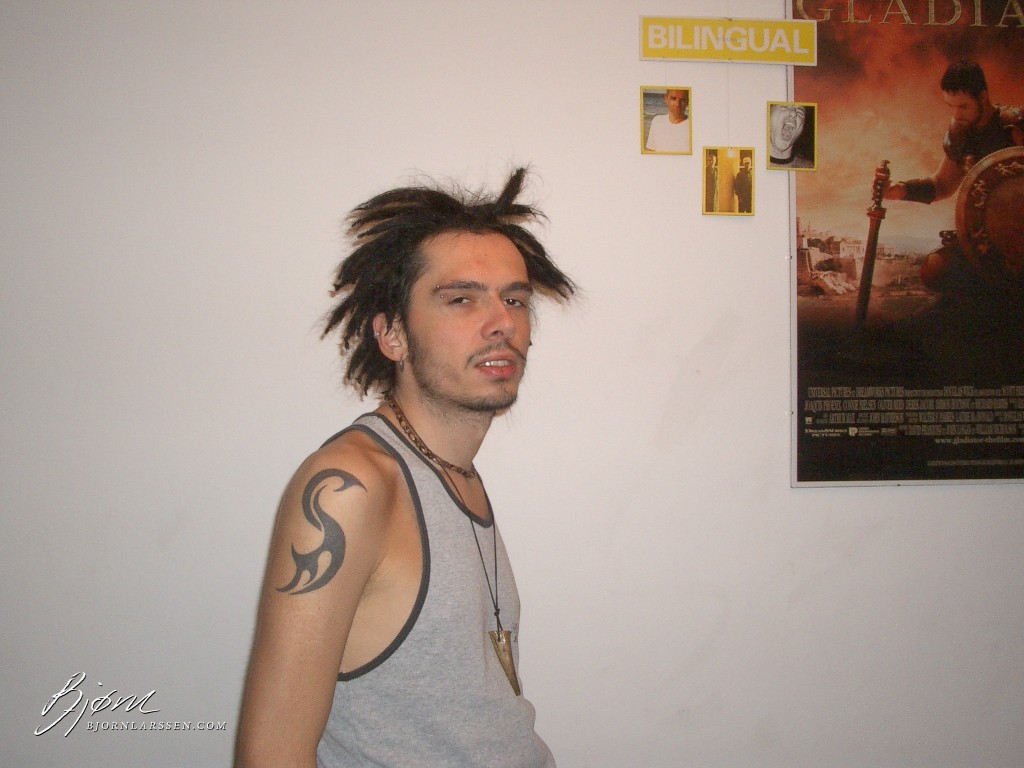 I am a proud owner of not one, but TWO mirrors.

When I look in the first, I generally think, “daaaamn bae, not bad at all”. Sometimes I think “daaamn bae, you’re greying” or “daaamn bae that is a VERY impressive zit”. But that mirror tends to bump my self-esteem even if it’s because the zit is truly of galactic proportions. The second mirror, on the other hand, always makes me look grey-skinned and tired. It underlines all the wrinkles, makes my black beard look like it’s greying even in spots where it isn’t actually doing it.

The interesting thing is that two mirrors both hang in the bathroom, approximately three meters apart. The only difference is that the lamp hangs closer to the first one.

As shallow as this sounds, the “choice” of first mirror I will look at on the day can affect my self-esteem for the entire day. The “worse” one, unfortunately, hangs over the sink where I brush my teeth and put on my lenses. The “better” one is the medicine cabinet. I do not organise my day about looking in mirrors in correct order, but perhaps I should. 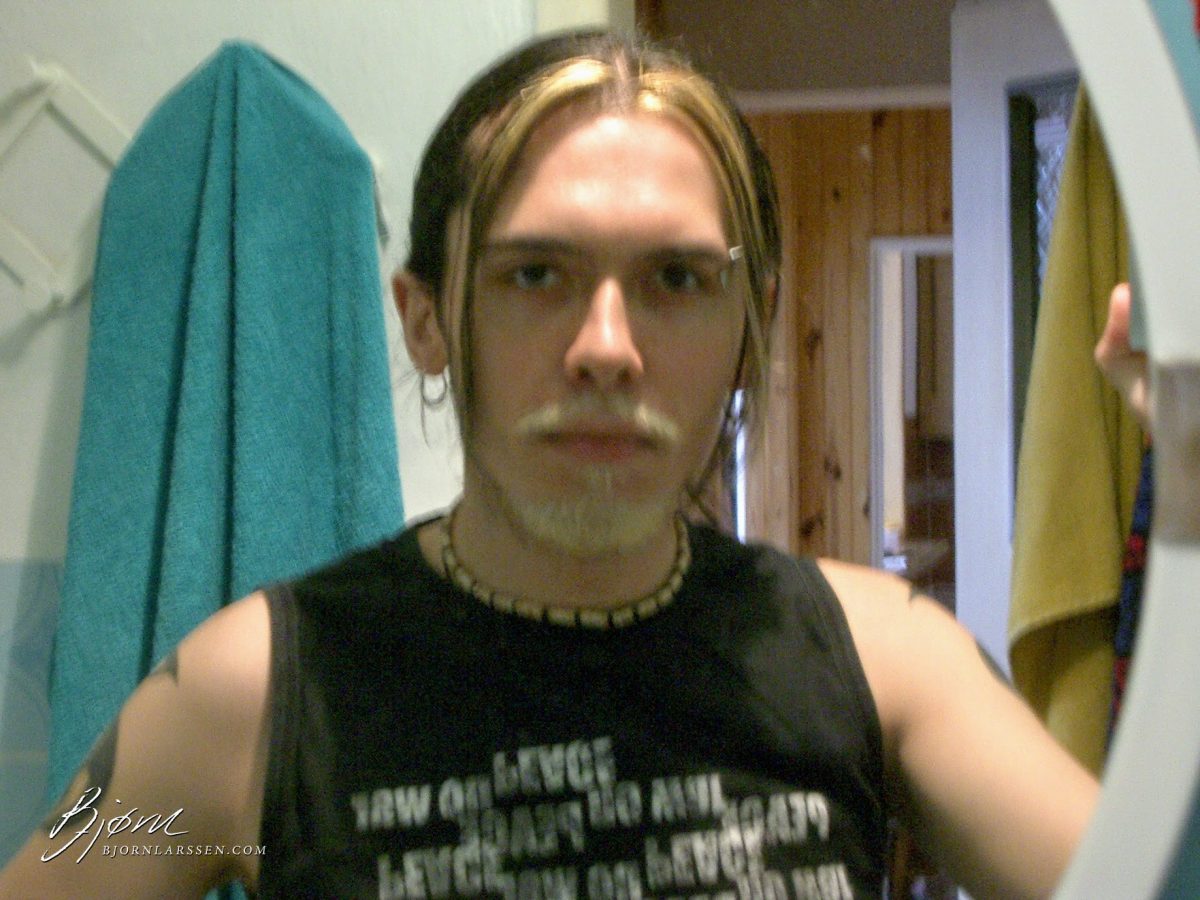 I hope you are not surprised to hear that those mirrors are actually a metaphor. Because what I actually want to talk about is how we see our mirror images in others’ eyes. There are people whose gaze is going to make me feel better and happier. There are people who just need to look at me once for a second to make me feel like I am Quasimodo with the most impressive zits ever. If those people are strangers, I generally don’t notice their existence, since I am the type of person who gets so lost in the music in my headphones that I miss the fact I’m standing next to a dear friend who’s trying to attract my attention by performing an interpretative dance in the nude. But sometimes the mirror people feel the need to tap me on the shoulder and ensure I know their negative opinion about them. A bit like Rebecca here (read the thread):

so. something v weird happened earlier.

I was picking out lipstick at target & some older dude said in a pretty condescending voice “You don’t need that stuff, you’re already beautiful.”

A good friend of mine wrote:

Only recently I realised that if I decided to talk about [thing], a lot of people would decide I am simply trying to flaunt how disgusting I am and that I should keep my thoughts to myself.

This is the kind of mirror I don’t want in my house. Or life. The mirror that not only gives you a better view of your zit and wrinkles, it actually huffs “if you could PLEASE not reflect in me, because it makes me sick, people with faces like yours belong in dark spaces with paper bags on their heads”. And then you turn around and the mirror is like “I STILL SEE YOU”, and you’re like, well fuck you mirror, and the mirror says “You are SO rude and impolite, I am just being nice and helpful, not only are you ugly but also rude AND a snowflake!”.

(I believe it was John Cleese who correctly pointed out people who call me a “snowflake” are actually saying “you’re not a sociopath, you have those ew, ew, feelings, and that is a bad thing”.) 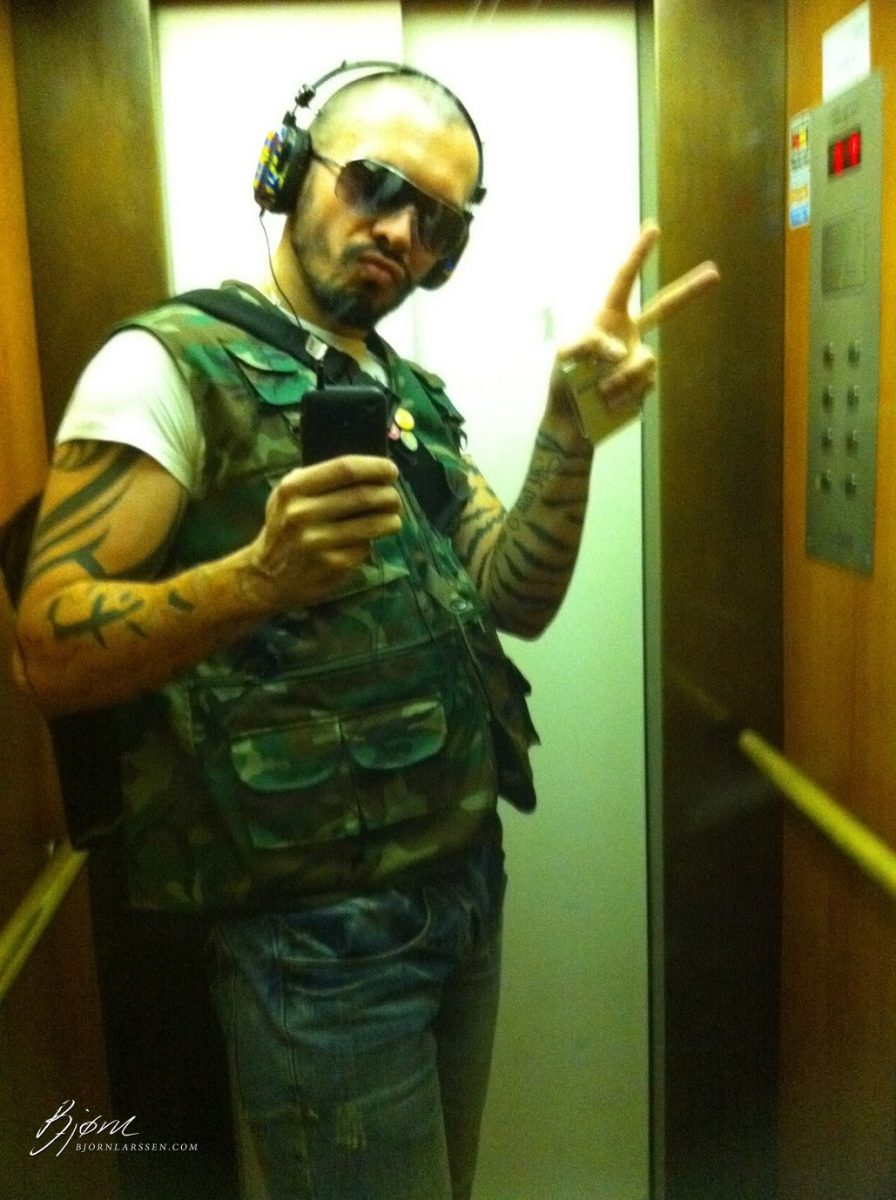 There is no objective way to tell whether I am a good-looking, funny, smart, well informed, interesting person, or perhaps disgusting, evil, gross. There are no objective rules for that. There actually are people who still insist Hitler was a very nice person and a misunderstood artist. (Those same people often insist Holocaust was faked, then move on to saying “but we should stage another one for everyone who isn’t like us”.) Those people are unlikely to become my BFFs. Some things can be perfectly fine inside a church, but NOT at my house – and, of course, vice versa. Even various sub-religions of Christianity can disagree on what is wrong or right. Hell, a friend of mine goes to a church where the vicar finds her perfectly…suitable, but SOME other churchgoers demand her to leave and never return. My friend, you see, is a lady of faith, she takes part in a lot of church activities, but she is also a lesbian. Another one went to her priest and asked if he found contraception to be a horrible sin. The priest was like “of course not, duh”. She mentioned this to a friend, who huffed saying “it’s the WORST of sins”. When she mentioned the priest’s opinion, the “friend” answered “well, then he is wrong”.

There is a book called “Eleanor Oliphant Is Perfectly Fine”. The book has been covered in such thick layer of awards that it’s hard to see the cover anymore. Tons of people told me I will love it. I suffered through first 1/3, cringing internally, feeling that it’s a particularly cruel portrait of a person with mental illness. I tried and tried. People told me it gets better later. I didn’t manage to last that long. I also hear that if I force myself long enough I will start liking goat cheese. I respect this WRONG view, then order pizza with pineapple .

This has no relation to whether the book is good or not. It means that when I am the mirror, this book has a lot of zits and wrinkles. It’s a matter of taste, world view, possibly even mood I am in. No book is ever going to be good enough to warrant perfect 5.0 average on Goodreads from every single reader. Not even mine. (SHOCK!) This blog is going to piss people off. Every blog is going to do it. People complain about too many kittens on the Internet, as if something like that could even be a thing. I used to write a very popular blog back in Poland. It was called “Scenes From the Life of Heterosexuals”. It was a humour blog, and quite often got linked on the front page of the most popular news portal in Poland. Every time I got that link my visits spiked, and so did the amount of nasty comments. This was the day I realised I can’t possibly satisfy anybody. On one of my previous blogs, where I wrote very openly about my life, I sometimes got one negative comment per 99 positive ones, and I suffered through sleepless nights wondering what I’ve done wrong, and why doesn’t this one person love me. Receiving comments that consisted only of expletives cured me from this. So did reminding myself that 13-year-olds can now post comments on blog posts.

This happened in 3D life as well, of course. Person one would look at me as if I was the eighth wonder of the world. Person two, thirty seconds later, would spit at my shoes. Obviously I would focus on wondering why person two doesn’t love me, and try to change myself, only to find that person two continued to hate me, and person one quickly withdrew from that stranger I suddenly became. 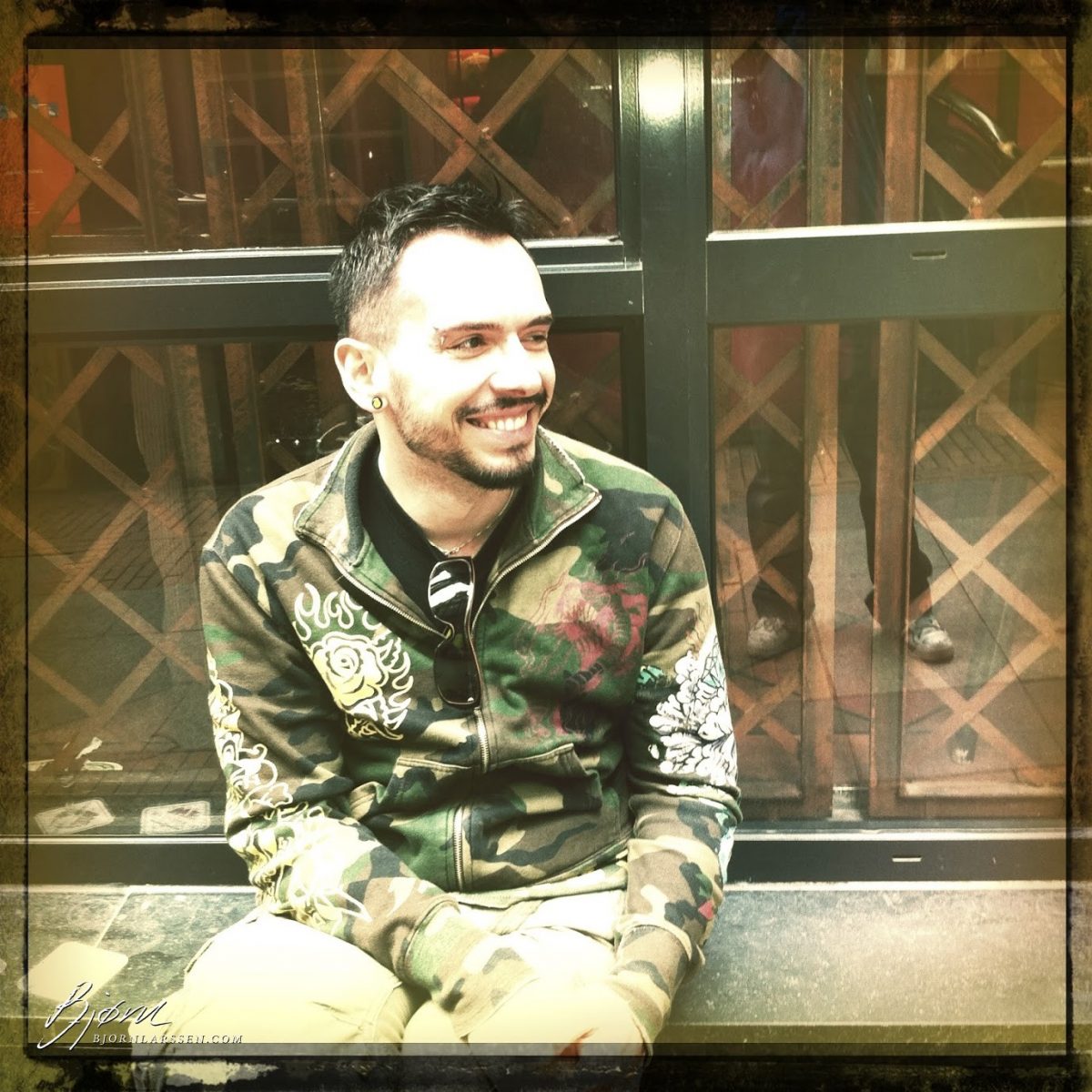 The worst mirror is the one inside of me. When depressions strike, in particular, I have a tape in my head telling me over and over and over how useless I am. Attention seeker (this is especially weird when I am alone and nobody can see me “seeking attention” by staying in bed for hours). Lazy. Gross. Awful. Worthless. This is a mirror that hurts, and I can’t even break it or turn away from it. This is when I need other people to remind me those things are not true, and this is why I had to let go of people who reinforced those beliefs. Often as I am writing the editor I work with is the mirror that helps me remember what I am doing has value. I would have probably left the book alone at some point, but the editor put so much work into my book that the mirror she is motivates me every single time she sends me an email. This is how I survived writing the book for nine months, thinking it was ready, then – so far – revising and editing for 9.5 months. There is end in sight. But if it were just me, it would most probably have ended by now. Because when your mirror is your low self-esteem and impostor syndrome, it’s not going to help.

It’s okay to look in the mirror that makes me look better. It’s okay not to put myself down in disguise of being modest and well-behaved. It’s okay not to listen to stupidest advice ever – “if I can do it, so can you”. I know a person with anxiety who “got over it” and told me repeatedly “if I can do it, so can you”. He is very well-meaning and sweet, but he’s also wrong. A person without legs can’t run a marathon despite the fact you can. A person with cancer can’t stop having cancer because you don’t have it. A person with anxiety disorder can’t just decide to stop having it, even though it can be semi-controlled with medication and therapy. An introvert can’t suddenly start organising huge parties and enjoy them. (I’ve read a comment once that the person – I wish I could remember her name! – hated books that began with a person being a hermit introvert, then at the end of the book being soul of every party they went to. This comment shaped a lot of my novel-in-progress.) 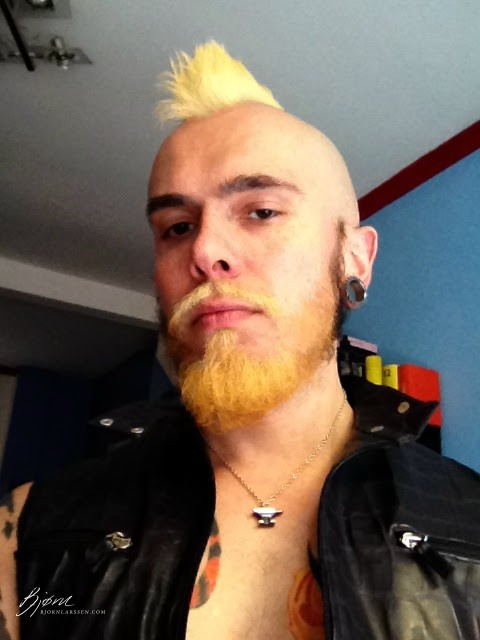 I may look better in one of my bathroom mirrors, but I still don’t look like Travis Fimmel. This, however, makes me wonder what Travis would think about his reflection in my evil mirror. Perhaps he’d quite Cindy Crawford – “even I, when I get up in the morning, don’t look like Cindy Crawford”. Perhaps he doesn’t need a mirror to confirm his exquisiteness. Perhaps he’d sigh “why can’t I look like Idris Elba”. Even mirrors change depending on who’s looking in them.

I used to Photoshop my pictures to hell and back. I stopped. I am who I am. Sometimes I am a person that looks like a go away, and then on the next picture five seconds later I’m delicious. Even if the same person took the photo. Because that’s how life rolls, baby. 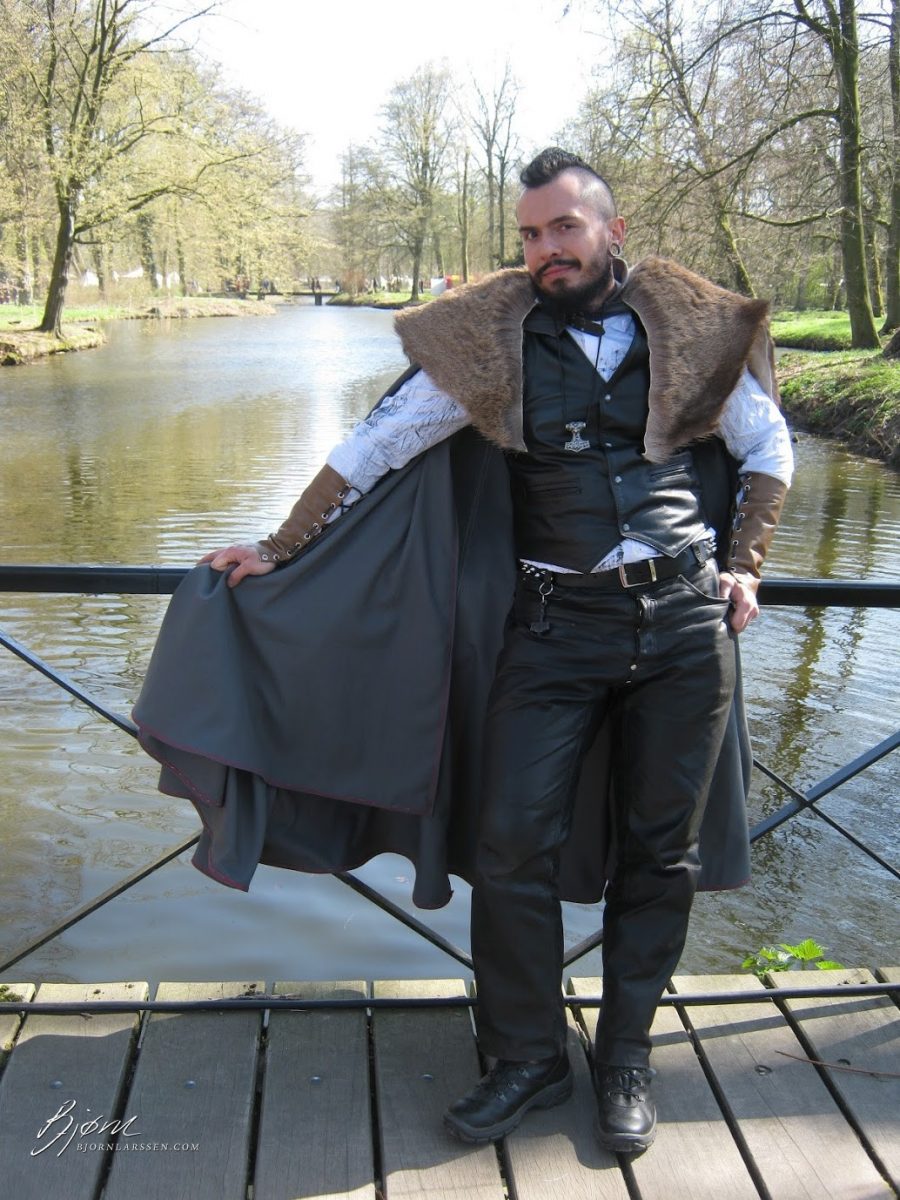