Barnes & Noble said that sales of books relating to managing and coping with anxiety are up 26% from a year ago.

The sales data shows that customers are gravitating towards workbooks and toolkits to try and manage the growing stress of “an anxious nation.”

“The Anxiety category has really popped in the last year as book buyers look for practical guides and strategies on how to manage anxiety,” Barnes & Noble’s senior director of merchandising, Liz Harwell, said in a press release.

I come from a generation born before Google existed. Yes. That’s how old I am. In fact, I was born before Internet existed at all. My first computer had 2 KB memory and loaded its tiny programs from tape. (For context: laptop I am typing this on has 8 GB RAM. This is four million times more. It’s not ideal. I hope to replace it with a 16 GB one, so it lasts me a few years.) I started a Facebook account with sole purpose of playing an illegal Scrabble clone with my workmates, and I did so reluctantly. I was among the last ones in the company to get an account. But I just wanted to play Scrabble. 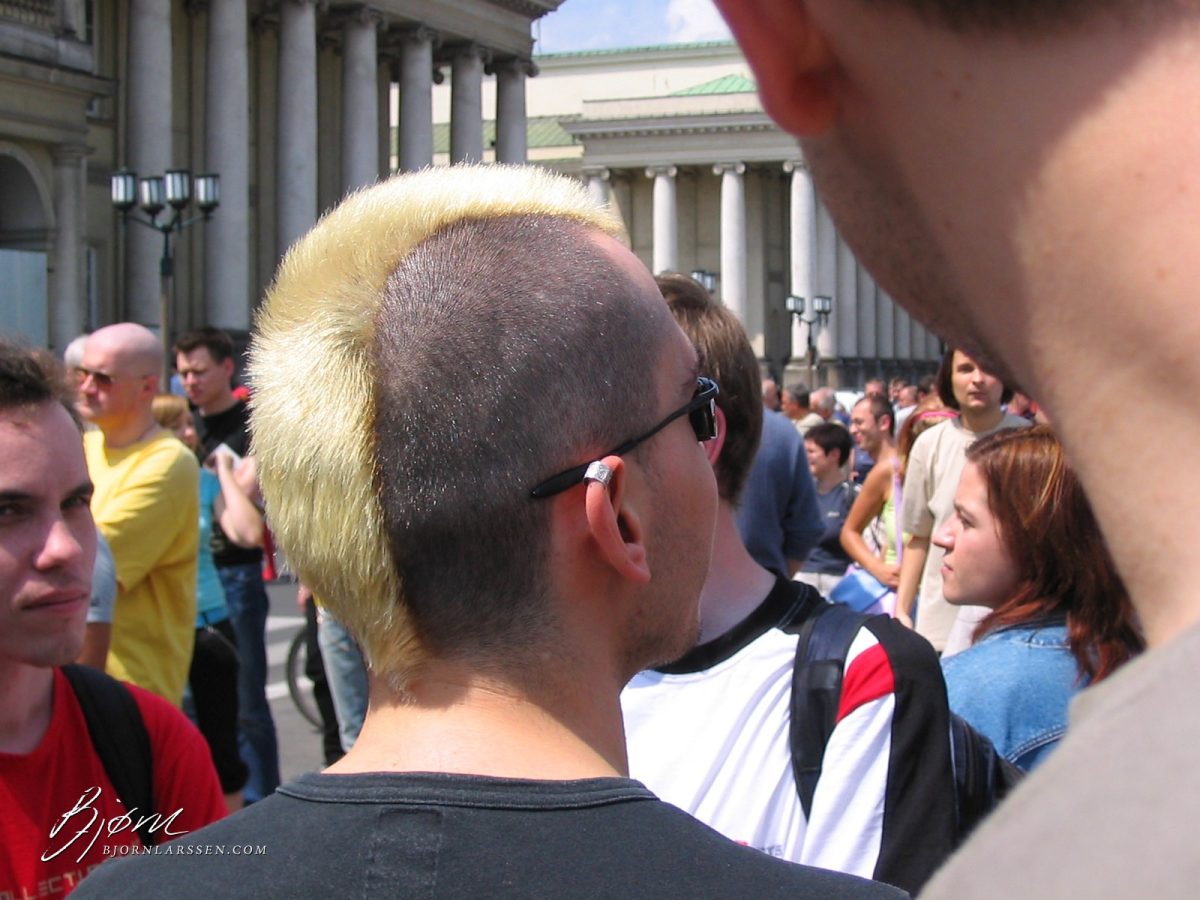 Happiness in 2004, at a political rally. What is this Facebok you speak of?

Back in the day *harumph, get off my lawn* I had a blog called From The Life of Heterosexuals. It was a comedy blog. Sometimes “mainstream” readers would bump into it, and unleash their minuscule fury. I had blogs before then, and every negative comment made me spend sleepless nights, worrying – why don’t they love me? What have I done wrong? It was this blog, with people threatening to beat me up, assuring me they knew where I lived, etc. that made me stop worrying. Because those threats were just so amusingly ridiculous. I couldn’t find it in me to imagine that my blog nickname and posts about how funny it was that women worried their husbands were gay because aforementioned husbands peed sitting down (this was my first post ever) could cause someone to seriously threaten my safety. I was, luckily, right.

Since then I received an actual death threat which sat in my “Other” mailbox on Facebook for almost a year before I read it. And I’m, relatively speaking, a nobody. That old blog used to get into top 30 most read blogs in Poland, but let’s agree that didn’t exactly lead to fame and riches. (I never monetised it, nor did I try to sell anything.) What did, however, happen was that I got anxious about producing The Content. My readers were waiting. I had to come up with something. It had to be funny. It became more and more an unpaid job. I cut the life support a few years ago. Some people still sigh wistfully when they remember the time the blog was active – it was truly loved (and sometimes hated). But I had a burnout from it. I could have plodded on. Lost readers, gained complaints it wasn’t good anymore. I didn’t. I said goodbye, started a very different blog, dropped that one. 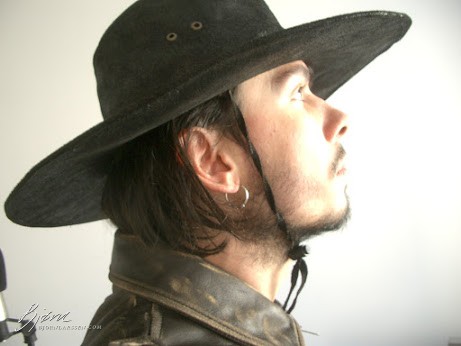 The difference was that ten years ago trolls were basically spotty teenagers living in their moms’ basements. Nowadays they organise. So do cliques. Fan groups. There is increasing pressure both on Living Pretty #soblessed and on “you won’t take away our freedom of speech, you ‘bad’ ‘sick’ people, WRONG!!!”. This attacks us from every direction. One of my job titles back in the day was “social media expert”. But social media was very different eight years ago. The worst fires I had to put out concerned our servers not working as fast as they mostly did. Nowadays it’s possible to get under fire by retweeting something vaguely political. To get hundreds of strangers telling you they will slash your face, cut off your boobs or balls, kill your family. To get doxxed (have your personal data, including home address and credit card number, revealed in public). Those are all things that happen, and not just to celebrities. They happen to a lot of people who dare to speak out about more or less anything. No, I am not Felicia Day or Sarah Jeong. But in 2018 you don’t have to be.

This is only part one.

I’ve long maintained a theory that the increasing rates of depression and anxiety are fuelled by the sheer amount of news, and they are almost always bad news, pouring all over us. Our brains have not evolved as fast as computing did. I first used Internet in 1996. The first website I saw was www.petshopboys.co.uk. I made my own shortly after. No. You can’t see it. (I hope. Internet Archive has everything. Luckily even I can’t remember the URL of that website.) But the amount of news we receive in a day is larger than that a 18th century person would receive in their lifetime. And we have to process all this on top of, you know, having a life. We go to Twitter or Facebook for relief, only to find out about Cambridge Analytica, about how our data is mined and ruthlessly used.

I wish I could quit you!

I first quit Facebook a few years ago. My friend list grew to over 400 people, which I realise is very little compared to an average teenager. It began to weigh on my nerves, and create anxiety. Was the photo I posted good enough? It got four likes, but this other one got 25. Should I delete the first one? Do people hate me now? Oh Gosh, Karen posted another 50 photos of her baby drowning in poop, and got 500 likes. I DO NOT HAVE A BABY TO POST. I am over. Everything is over. And that was before certain politicians started making the news twenty times a day.

The first thing I did was pruning my friend list until I got down to 100. This proved not to be enough. Being on Facebook made me anxious. Not being on Facebook made me anxious. The amount of messages I received from strangers through my blog – and those were NICE messages! – made me anxious. I started to spend spoons I didn’t have to help other people until I hit the wall – hard. I requested people to stop asking me for personal help. I felt like a shitty person. I then deleted the account completely and started a new one. I had seven friends. But then people I really liked sent me requests. It was going well, until I found myself in the exact same spot as before, too anxious to even open Facebook. I had a Twitter, and whether I was even looking at it or not it kept on stressing me out as hell. Just by existing, and by me not existing on it enough. I was missing out on important news if I hadn’t checked the news sites at least eight times a day. I could possibly miss one email AND THEN WHAT.

I deleted the second account as well. The last drop was when I uploaded a photo of myself after corrective surgery to a closed group. Ever since then when I wanted to change my avatar picture the first suggestion Facebook made was this photo. I looked like a victim of violent fight on it, which was amusing after the surgery, but less and less amusing when I discovered this photo was impossible to delete. It did not appear in any of my albums. I would have to find the original post I made in the group. It’s a very active group, and I was very active in it. I found some posts with my photos and deleted them, but this one was hidden somewhere deep enough that I couldn’t get rid of it. Every. Single. Time. I tried to change my avatar pic I saw my bruised, battered face. The only way I could get rid of this picture was by deleting the account and starting another one. 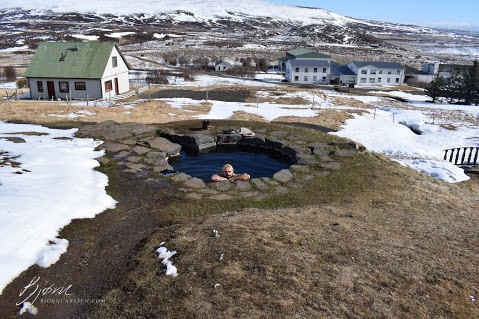 Happiness in 2018. I wish I could have stayed in this tub forever.

Somehow in the last year or so I seem to have found a way to use social media and not be consumed by it. I do not use Snapchat or Instagram, because they don’t work for me. There are perhaps two photos of me that I put up, my avatar photo here and that one where I am in a hot tub in Iceland. Alone. Without my phone in my hand. Without Twitter, Huffington Post, CNN, BBC, etc. There are mountains, some snow, the magic of sitting in a hot tub while snow is all around me. I am able to disconnect. But then I get anxious. What if there is something I should know? What if something changed? In the previous centuries most people learned that there was a new king months or even years after the event. Nobody particularly cared which king they are never going to see unless they are sent to battle, unless the king was a particularly nasty person. Today I know about almost everything certain politicians do, despite actively trying to avoid the news.

Writing is my escape. So is, weirdly enough, installing operating systems on computers and fixing software problems. Listening to music (if I can hear it over the noises from the outside). Being in nature. Amsterdam doesn’t have much nature in it, unless you’re willing to brave crowded streets and crowded public transport in order to get to a crowded park.

Yes, Matt. Yes, Barnes & Noble. We are living on an anxious planet. We created it ourselves. We created the need that people feel to get plastic surgery so they look like filtered Snapchat photos. For someone born in 1977 this is a sort of anxiety I am very unlikely to ever feel. But, really…who knows? in 1996 I didn’t expect to ever find out Facebook was downloaded a billion times from Play Store, or that I would constantly see a photo of my bruised face without being able to delete it. I never expected people to willingly pay for devices that constantly listen to them. The article I linked to at the beginning of this post mentions fantasy books’ sales are going up as well. I can really understand why.