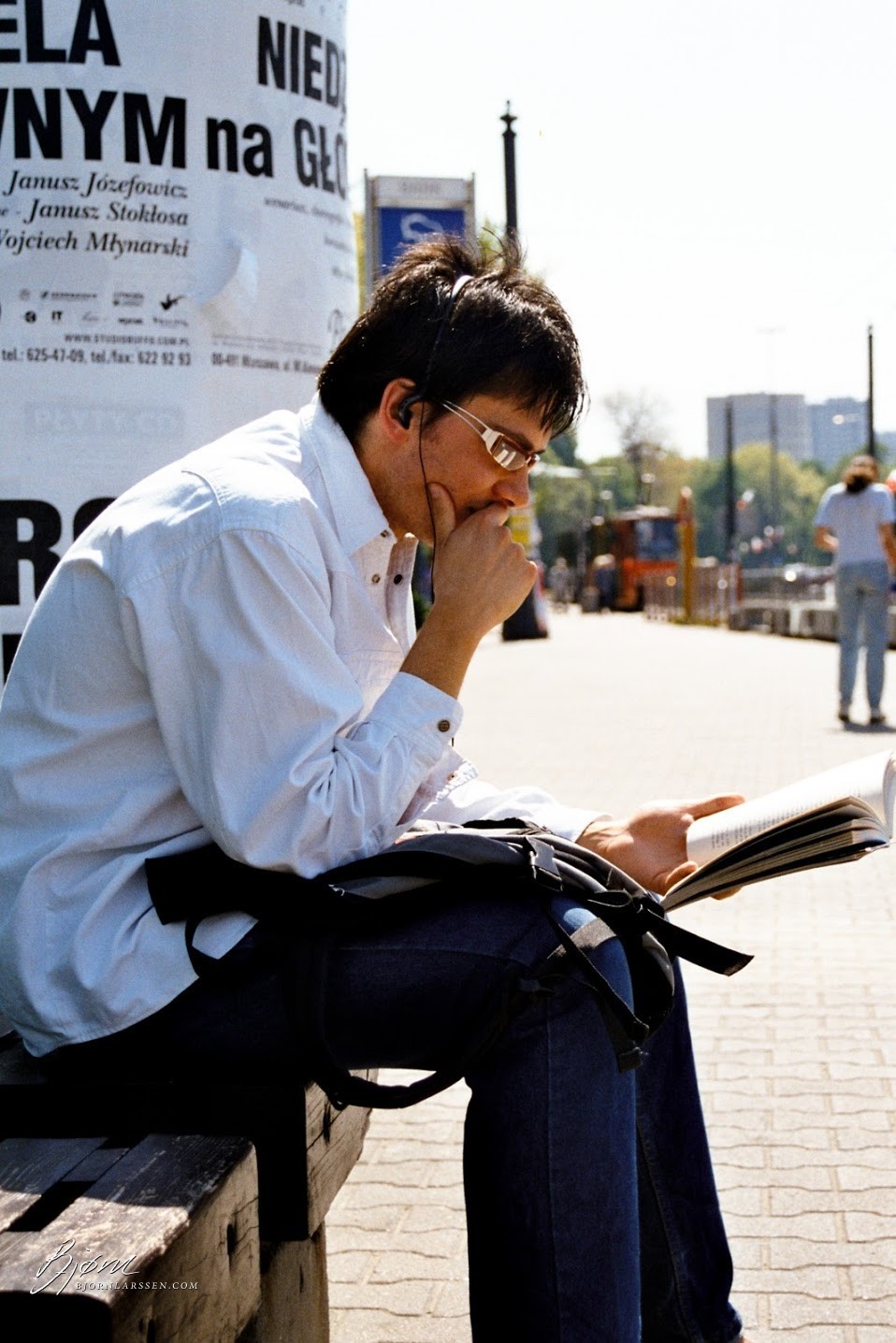 I taught myself to read when I was four years old. This is neither an exaggeration nor a joke. I was one of those kids who wanted one out of three books (very short ones, but still) read every single evening over and over and over again. Eventually, my grandparents and mom had enough and told me “you memorised all those books by now”. They were correct. I was smart enough to notice there was a connection between the written words and the ones my mom said out loud. I became a minor sensation in the neighbourhood, but I had no interest in fame and fortune. I just wanted to read, and once I was done with my three kids’ books I found out that there were hundreds of books in our house.

I started plundering through the adult library without anybody really noticing – how would a 4-year-old manage to read science-fiction or blood-dripping thrillers? In the beginning, the answer was “slowly”. When I got to school and we had to learn each letter separately, then read sentences along the lines of “Anna has a cat” I couldn’t figure out what all that was about. I decided that probably we had to memorise the texts, because otherwise what was the point? Once I memorised the two lines that were our homework, I went back to my Kir Bulychov books.

I remember being seven or eight, reading a book that had a sex scene of some sort in it, and being bewildered as to why someone would want to do ewww-y things like this – or even write about them. Hello? SENTIENT ROBOTS! Stop the stupid thing and tell me more about the murderous robots! Nobody noticed I went through my stepfather’s entire collection of thrillers, horrors, crime stories before turning 10. But then what books were suitable for my age back in the 1980s? Dumb ones, I decided, then went back to Stephen King.

Around the age of 13, I discovered the local library had THOUSANDS of books available. It was free, and you could borrow six books per person, or per library card. I got three cards – for my mom, my brother, and myself. That gave us a total of 18 books. Every month I would borrow 15 books for myself, three for my mom, and, er, my brother liked football. I didn’t go by genre, I went alphabetically section per section without paying much attention to the genre. I ate those books. Once I discovered Julio Cortazár’s Hopscotch I went to the librarian and asked innocently what would happen if someone, theoretically, of course, lost a book. The librarian somehow guessed that someone would be me and told me the person would immediately lose their access to the library.

What kind of hateful monster! (The book was, of course, out of print.)

Until the age of 25 or so, I never realised that good 90% of literary classics just so happened to be written by white, straight, cis men and revolved around white, straight, cis men. (Count how many non-default writers feature in the top 20.) For the first time, I realised how many genres existed. Fiction, non-fiction, humour, suspense, noir, literary fiction, memoir, crime, thrillers of all sorts, fantasy, science fiction…and women’s literature. Apparently, genres were for men. I was already used to the fact that queer characters didn’t appear in books unless someone had to either dramatically die of AIDS or find the right woman to cure their gayness. (Or unless I went and bought a “gay erotica anthology”.) (This never happened.)

I started searching for books that would provide me with something different. This was how I discovered Jeanette Winterson, Erica Jong, Margaret Atwood, James Baldwin, Andre Norton… I wasn’t doing it consciously. I just wanted to read something I haven’t already read in 20 different variants. Those books, with exception of Andre Norton’s Witch World, were surprisingly difficult to find in pre-Internet era, where I had to rely on word of mouth. But there wasn’t much, because if a book wasn’t popular people didn’t talk about it, and if people didn’t talk about it, the book didn’t become popular.

When Black Panther became a hit, I failed to be surprised by its popularity, but I was shocked at the amount of backlash. Perhaps I shouldn’t have been, knowing that a mere suggestion that Idris Elba could possibly play James Bond was immediately countered with “Bond is white, always was, always will be! It’s THE TRUTH! What’s next? A black disabled lesbian?” My immediate reaction was “YES PLEASE. Finally, a reason other than Dame Judi Dench for me to watch a Bond movie!” You’d think there were enough mainstream action movies with fully white cast plus a token person of colour and/or a non-threatening gay character, but apparently one or two mainstream movies that didn’t adhere to this “standard” were a threat to the entire humanity.

I was sternly told off when I suggested that casting a non-white actress in The Witcher might not be a very bad idea. I was told that the books never mention her not being white, and the movie must be an accurate reflection of the stories. Yes. Because the genre called “fantasy” is actually reality and if someone changes the tiniest bit they’re rewriting history and causing an irreversible time paradox that rips through the substance of the universe. Kelly Marie Tran was harassed for daring to be a non-white person having a lead role in Star Wars. In the Lord of the Rings movies, everybody just so happened to be white, except for the orcs, who were black, disgusting, evil, and generally ewwww. The elves, ideals of beauty, just so happened to be both white and blonde. Some of the posters in the thread I linked to explain very clearly that the races Tolkien wrote about were white men, dwarves, elves, and so on. No place for non-white people. As we all know, dwarves and elves are real, all of them are white, we’ve all seen them around. Right? Right! We have. In the Lord of the Rings movies.

Once I realised that the world seemed to revolve only around one narrow subset of humanity, I couldn’t stop noticing it anymore. I couldn’t miss the hatred aimed at Barack Obama simply because he wasn’t white. (The words “the end of white man’s civilisation” were used by a prominent Polish politician.) Casting Scarlett Johansson as an Asian woman and Tilda Swinton (I ADORE Tilda) as an Asian man. Margaret Cho being told she was too fat to play herself. The fact that the covers of Marian Keyes’s books featured pastel colours and cut-off thin legs of high-heeled women with big shopping bags. The fact that in the first Thor movie, directed by Kenneth Branagh, The Obligatory Gorgeous Scientist actually does something else than just being pretty, but in the second one she in turns shrieks, faints, and asks men for help.

Give me dat buzzing #diversity!

I’m here for books I haven’t read yet. I’m here to see Oranges Are Not The Only Fruit, The Hate U Give, and The Hours being recognised as the classics they are. I’m here to see LGTBQIA+ characters that aren’t included solely to provide extra drama or become cured by the love of the right [insert person of opposite binary gender as determined by genitalia].

I’m not asking for books and movies replacing ALL cis white straight men with black disabled genderfluid bisexuals. I’d just like to see a proportional representation for those who are not “default people”. Characters with mental illnesses rather than a mental illness attached to a lazy outline of a character. For a very long time, the only way I could read about the life of, say, an autistic woman was by buying a memoir of an autistic woman, unless a mainstream book/movie required someone with incredible talent in mathematics and lack of social skills. The Marriage Plot by Jeffrey Eugenides, hailed as a great depiction of bipolar disorder…isn’t. The less said about The Silver Linings Playbook (the movie), the better. As imperfect as it was – Claire would randomly stop taking her medication for no reason when the writers decided the series needed some more drama – Homeland at least gave her more character traits and things to do than just be (rather than have) bipolar.

Traditional publishers seemed to avoid anything that wasn’t mainstream, and we all know what mainstream used to be until suddenly they found out (SHOCK!) that there are billions of people who are not represented in movies and books at all. #ownvoices!!! (As in #ownmoney!!!) Obviously, I approve of the idea. Not necessarily of its execution and certain ways of discussing what #ownvoices even means. But I hope that within the next, let’s be optimistic, decade Brokeback Mountain or Black Panther will no longer be an outlier among 1000 “traditional” white-man-saves-the-world-while-a-gorgeous-female-scientist-faints-in-his-arms blockbusters.

This is absolutely not to say that white-cis-straight-men are now forbidden from publishing everything. What I want to stop hearing are stories about a white editor telling a black woman that she doesn’t know how to write a black character correctly. Stories about a publishing house rejecting a PoC book because “we already have one scheduled for this year”. This is not fiction. This is the reality of non-default artists trying to get a chance to find their audience and give them representation. I love Celeste Ng’s books and simultaneously mourn the fact that Amazon’s “also bought” page doesn’t actually recommend anything that would seem remotely similar. Which is probably because no similar books have ever entered the mainstream. “We already have one Asian-American writer, thanks. REJECTED.”

Well, now I caught your attention. I should have started with this. *slaps self*

(Most steamy sex scenes, no matter what genders, races, or aliens are participating, still cause me to skip pages until the universe-shattering orgasms have been achieved. Call me a prude, but I have a whole library of, er, nature-related films for that.)

My second work in progress, an urban fantasy, features an ace (asexual) protagonist. This is not to show how horrible his life is or so I can market the book as #diversity. It’s because he is ace, it’s important to the story, but it doesn’t define him. Gareth has brown hair, is a painter, is ace, has certain powers, works with a bunch of people at an IT company, likes pizza. I don’t have an entire chapter explaining what being ace means, complete with links to forums and Wikipedia and whatnot. What I do have is research I’ve done, which proved surprisingly difficult because that’s how few books featuring ace characters even exist; interviews I conducted with ace people; sensitivity readers who are not there to tell me to “write what you know”, but rather to check whether I’m not reproducing stereotypical crap.

I’m writing books I want to read. But my ego isn’t big enough for me to only want to read my own writing. Send help (as in titles and authors). And if someone could start working on that Jane Bond movie where Jane is a black disabled lesbian, I’d be really grateful and willing to buy tickets in advance.

Main photo: yours truly doing what he’s doing. No, I am not 4-years-old on this photo. Digital cameras weren’t invented yet back then – THAT’S how old I am!