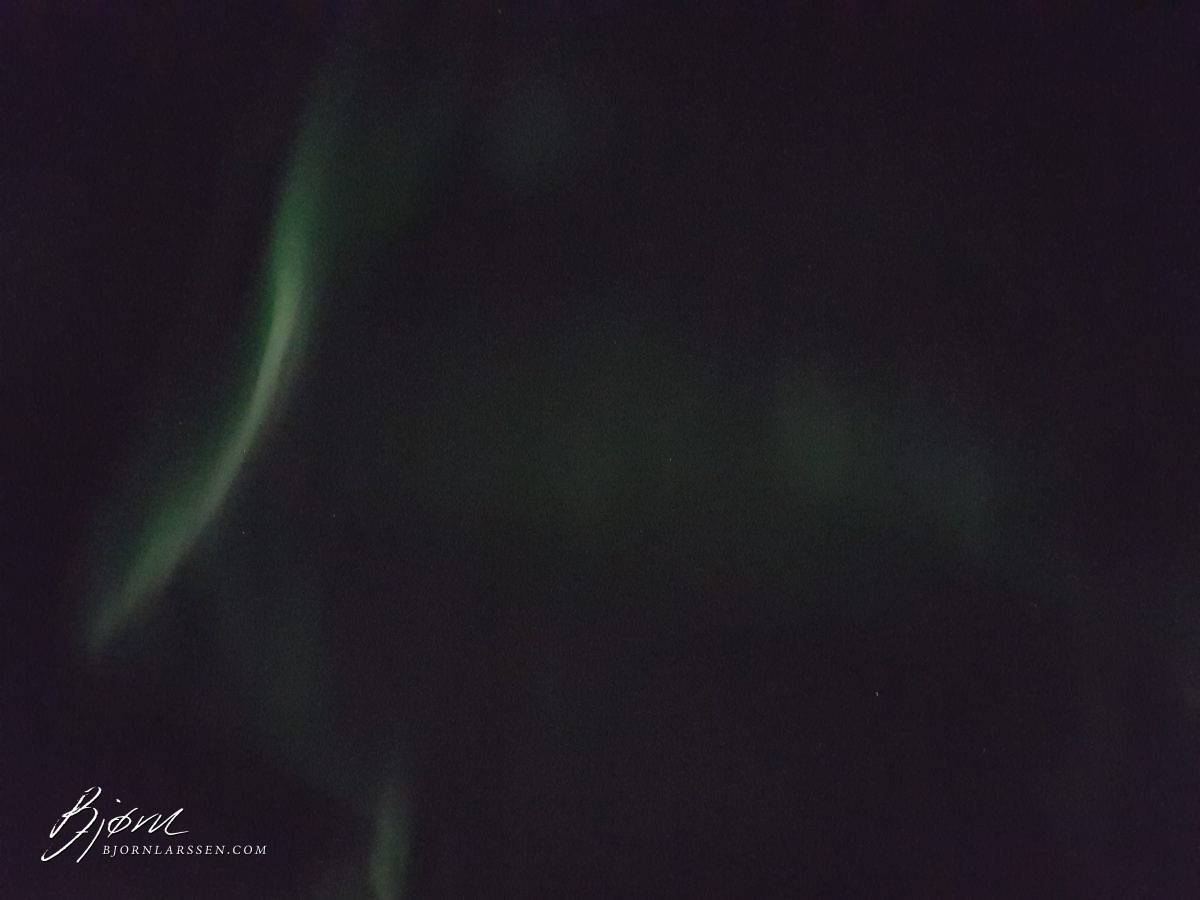 We booked a Northern Lights Special Tour Amazingness Mostly Guaranteed Three Decks And Free Overalls for Thursday night. Weather prediction was “not a single cloud on the northern hemisphere”. The aurora forecast – 3 (moderate). Which unfortunately has been the best so far. But it was also 3 on the Wednesday night. When, as you might remember, we were back from Seltún and, frankly, rather tired. We played cards for a bit before sleep, and on our way to bed I just took one look at my messages, and discovered our landlady sent us a few… 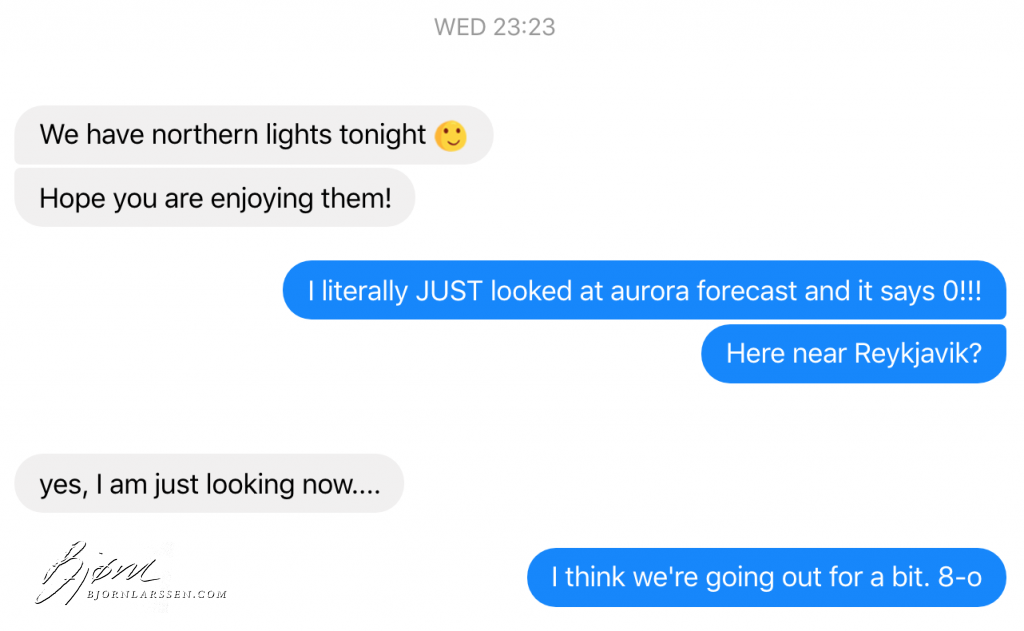 As we walked the street – with complete set of street lights, of course, and the streets of Reykjavik are BRIGHT – we already saw it. But we were aiming for the Sun Voyager, which was the darkest spot we could think of at such, er, short notice.

There was a bunch of people. Scots, Poles, Brits, who even knows. They were behaving like tourists, i.e. making noise, taking photos of themselves, etc. I tuned them out.

Seeing Northern lights on YouTube or photos just doesn’t prepare you for the reality of them. The photo above is maybe one percent of how bright they were; I just took a snapshot with the phone to remember the moment, the timestamp is more important than anything else. I know they are some sort of magnetic blah phenomenon of physics yada yada. To me they are Earth rubbing edges with Midgard. And the worlds were very near that night. As tourists squealed, trying not to fall in the water, cars passed by roaring, I stared at the stars, the sky, the magic.

The dance lasted about 45 minutes. We walked home, still casting looks up at the sky, awake like we’ve never been before. Upon our arrival home I felt as if someone punctured and deflated me. I dropped into bed and fell asleep. I dreamt of friends from many years ago, somehow connecting with people that are in my life now. Those I haven’t been in touch with for a decade hanging out with those who are dearest to me today. Finding old posters of music concerts that never happened. There were no Gods or auroras in my dreams. But there was magic of very different sort.

As you can guess, this built incredible expectations in us for Special Magical Northern Lights Tour On A Boat With Free Overalls. We arrived in time, joined the crowd, some of whom immediately started putting the Free Overalls on top of all the layers they already wore. This was an aurora equivalent of the sort of people who queue at the gate at the airport before the plane even arrives. The boat departed on time. We stood on the deck, waiting. The sky was cloudless. The further we were from Reykjavik harbour, the more stars we could see, and the more I realised how difficult it really is to escape light pollution. We waited.

And then we waited some more.

And then we returned to the harbour at 1am. Some people who wore Free Overalls got so overheated they fell asleep. But other than stars in the sky and shockingly delicious waffles they missed very little.

I have grown to respect nature. Not just Icelandic, nature in general. Because nature doesn’t give a fuck about what you planned or paid for. You can’t make Northern lights appear because you booked a tour. If the Gods so decide, you’ll be subjected to the magic in the middle of the city, with a bunch of half-drunk Scots shouting around you. The aurora forecast which says “moderate” may be incorrect. The “quiet” (this is when we saw the lights a day earlier) may be equally incorrect. We fly to the moon – well, not recently – carry supercomputers in our pocket, access all music ever recorded via invisible waves going between phone towers and our pocket supercomputers. But we still don’t know how to get rid of mosquitoes, or cause natural phenomenons to happen because we booked them.

Earlier today I have rewritten the entire scene in which an American girl witnesses an aurora for the first time. I might have overused the word “magic” a bit. But if you haven’t seen it, you’ll have to trust me – there is very little that compares to Northern lights chasing the stars as you stand next to Sun Voyager, watching.