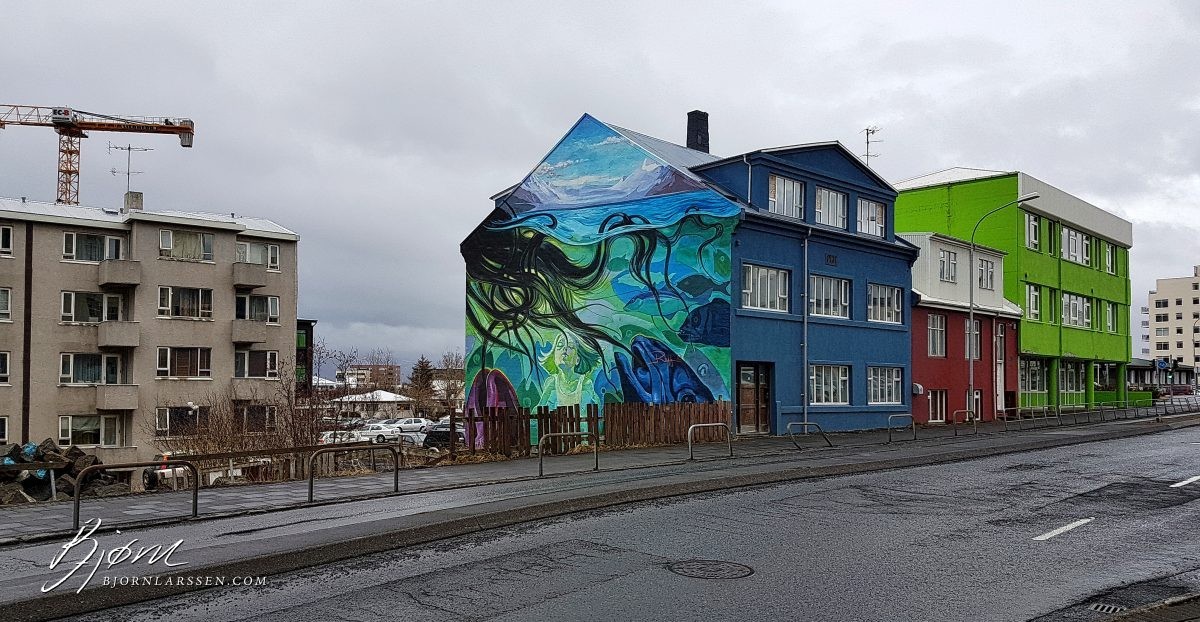 The main photo is a pretty good example of what Reykjavik is like, but it misses this certain je ne sais quoi… 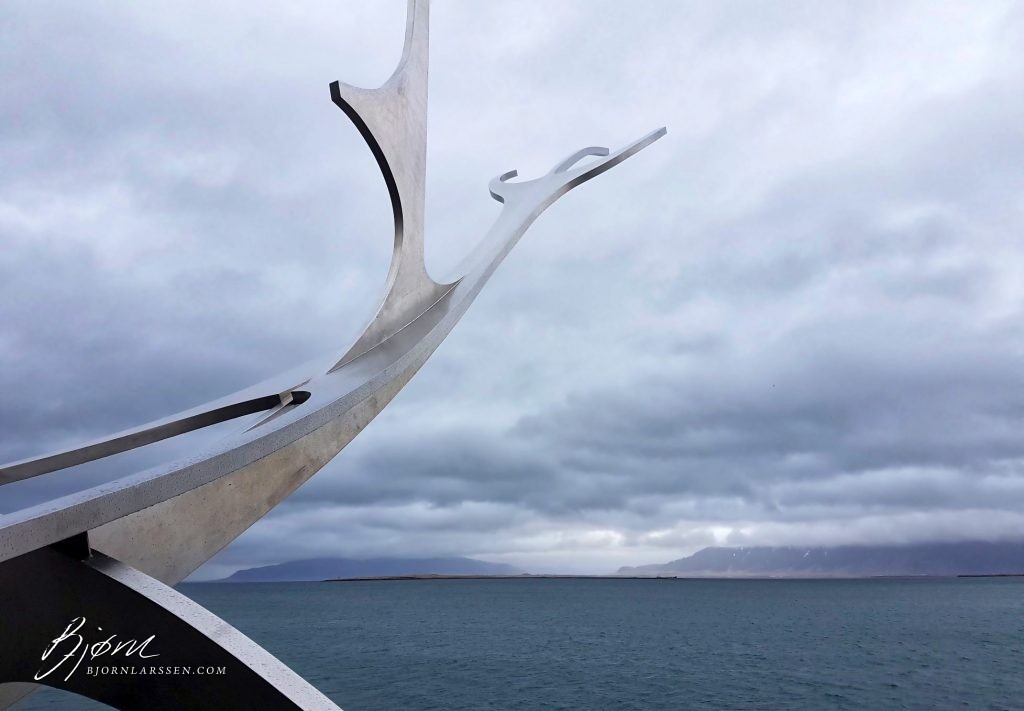 Reykjavik makes me think that someone took a few towns I know – Warsaw, Cracow, Birmingham, and Berlin, then threw them all in a cauldron, stirred just a tad, then threw them in one spot, and surrounded by incredible nature for no reason at all. You can walk past a butt ugly building site with view on the mountains. Buildings that are nearly falling apart will be found right next to new and shiny ones, and both will be covered in breathtaking graffiti. Or in the “Bjarni was here lol” graffiti, of course. A super pricey jewelry store will be found next to something that looks like a neighbourhood cinema from an early Almodovar movie. And then Sun Voyager in front of, I kid you not, a gas station. Actually scratch the rest, this is what Reykjavik is like. (The sight of Sun Voyager puts tears in my eyes no matter how windy or sunny the day is.)

I’m not going to throw in a photo of Hallgrímskirkja, but I delight in the fact that there is a statue of proud Leifur Eiríksson right in front of one of the best known churches in the world. Someone make me a replica (since there are two of those already, that should be piece of cake). Both Hallgrímskirkja and our dwelling are located near Óðinsgata and Þórsgata. Cafe Loki (I’m not going in there), Thor Giftshop, Viking Bar’n’Grill… okay, the last one might not exist, but in general Icelanders are pretty relaxed about their cultural heritage. Old Gods and the new one seem to coexist pretty well, and with the exception of idiots who think, for instance, that devastating the moss is a good idea everyone here seems rather peaceful. Most murders in Iceland have been committed by Arnaldur Indriðason. This is the famed Instagram of Reykjavik police force. It’s a lovely, quiet place…

…until about 1am. When we were returning from our somewhat failed Northern lights journey we were walking down Laugavegur, the main shopping/tourist street, and passed bars, restaurants, and clubs. I felt like a proper old person pointing out that the girls are going to freeze their most intimate bits wearing miniskirts that hardly covered aforementioned bits (we were dressed in all our winter gear, including, in my case, longjohns). The guys didn’t bother putting on jackets either when they went for a smoke (and a beer, and a few shots, and some shouting). I value peace and quiet, so I’m actually very happy about the fact nightlife starts so late I am already asleep. Our street, Njálsgata, is two blocks away from Laugavegur, but we hear nothing at all.

Since we haven’t given up hope to see Northern lights, we found (with some help from a gentleman called Krisjon) a very nice spot – Grotta lighthouse, which – click through the link – isn’t technically Reykjavik anymore. It’s beautiful. The microscopic peninsula is home to ducks which make the weirdest ghoul-like noises I’ve ever heard coming from birds. And the wind is so strong that my attempts to record the sounds, which were properly loud, resulted only in recording of – well – wind.

I’ve made a mistake of not wearing a winter hat. Temperature was pretty reasonable, it wasn’t raining, and… and… 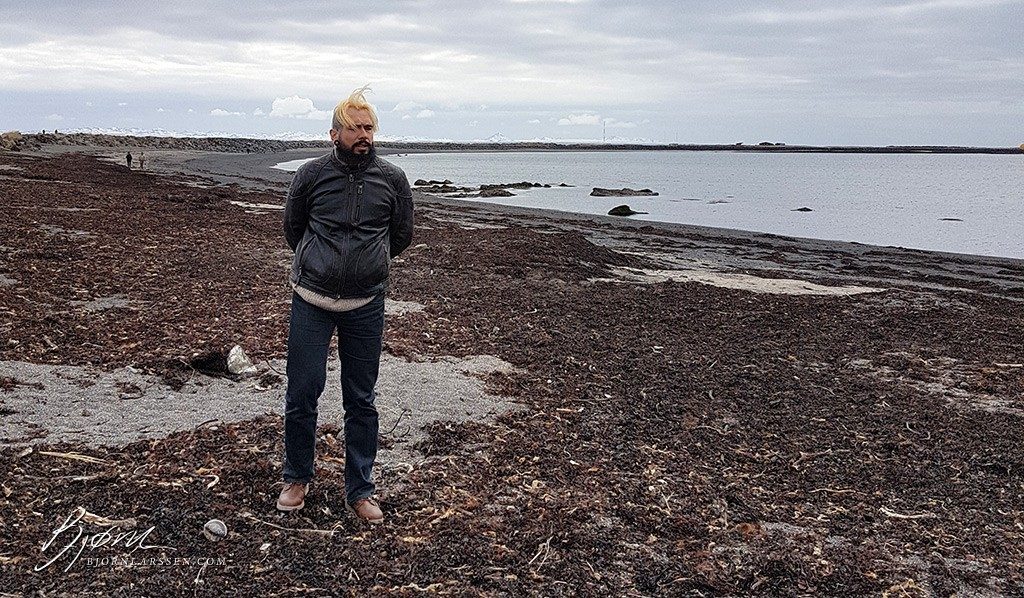 …and there was some wind. And a lot of rocks, water, little buildings (Iceland’s national speciality: gorgeous, small buildings in the middle of nowhere, surrounded by views worth their weight in gold, and mountains are heavy). And the ducks. And very few people. Pro-tip: go to Iceland in April. AND WEAR A WINTER HAT.

We were rewarded by the sight of the lighthouse itself. Just not for very long, because I insisted we immediately go home, crank the heating up, and never set a foot outside again. 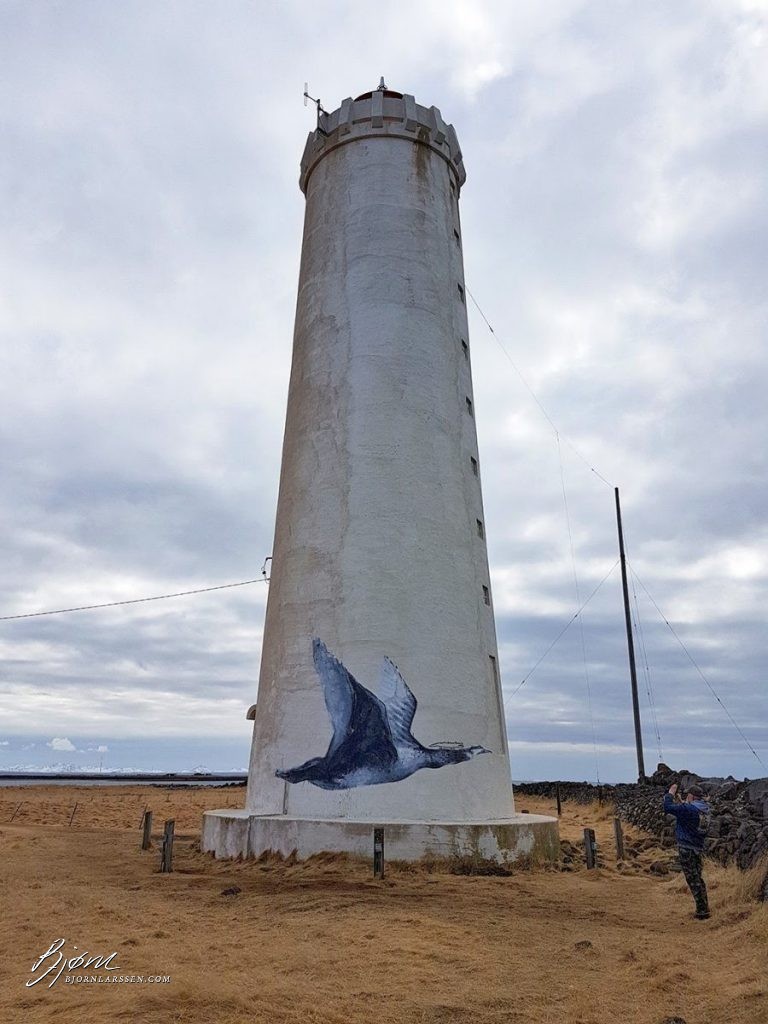 Have I mentioned the graffiti?

Two minutes after this photo was taken, the weather took a different turn. The t-shirts that say “if you don’t like the weather in Iceland, wait five minutes” are not actually funny. Wind, however, continued uninterrupted. It is not temperature in Iceland that is the reason for “ice” in its name. It’s the wind. 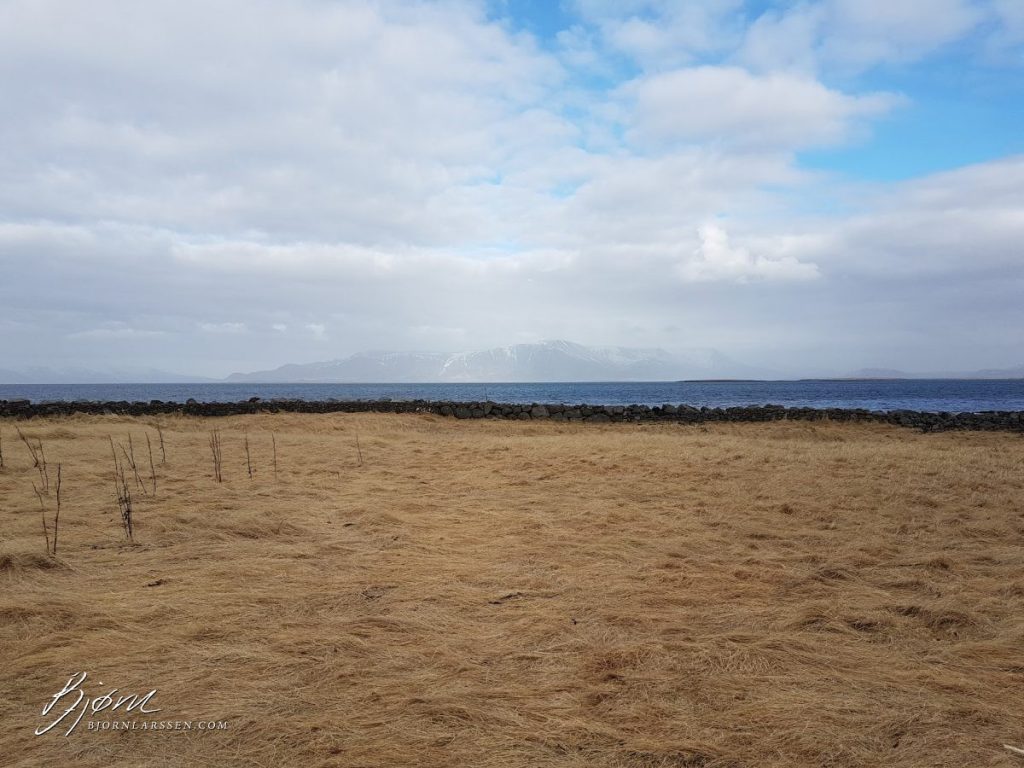 I could go on, and I will. Because I need to tell you all about the dinner we had at Snaps with Helga Maureen (squeee! – waving in Icelandic) – the expert helping me with research and also a lovely person. About the Icelandic dictionaries and bookstores. About the fact that while it is not recommended to ask Icelanders whether they know Björk personally, some of them bump into her at the supermarket. About what the words “swimming pool” mean here. But mostly I need to get to writing a longer explanation about how all this came to happen in the first place.