My brother came over to spend the weekend, and one of his wishes was to see a Viking museum. Of course so was mine, and this is how we ended visiting the Saga Museum.

Don’t expect to spend a lot of time there. The guided tour (audio in various languages via headphones and a little player) takes 30 minutes. The museum is, in my opinion, aimed at teenagers rather than history nerds. Having said that, I had a blast. There is a section where you can try on (real) chainmail, play with (fake) weapons, and take photos. I happen to have tons of chainmail at home because of Husby, so I skipped that bit. But one of the props is a very, very surprised Viking, whose facial expression reminded me a lot of how I must have looked when on a bad hair day I bumped into an ex. 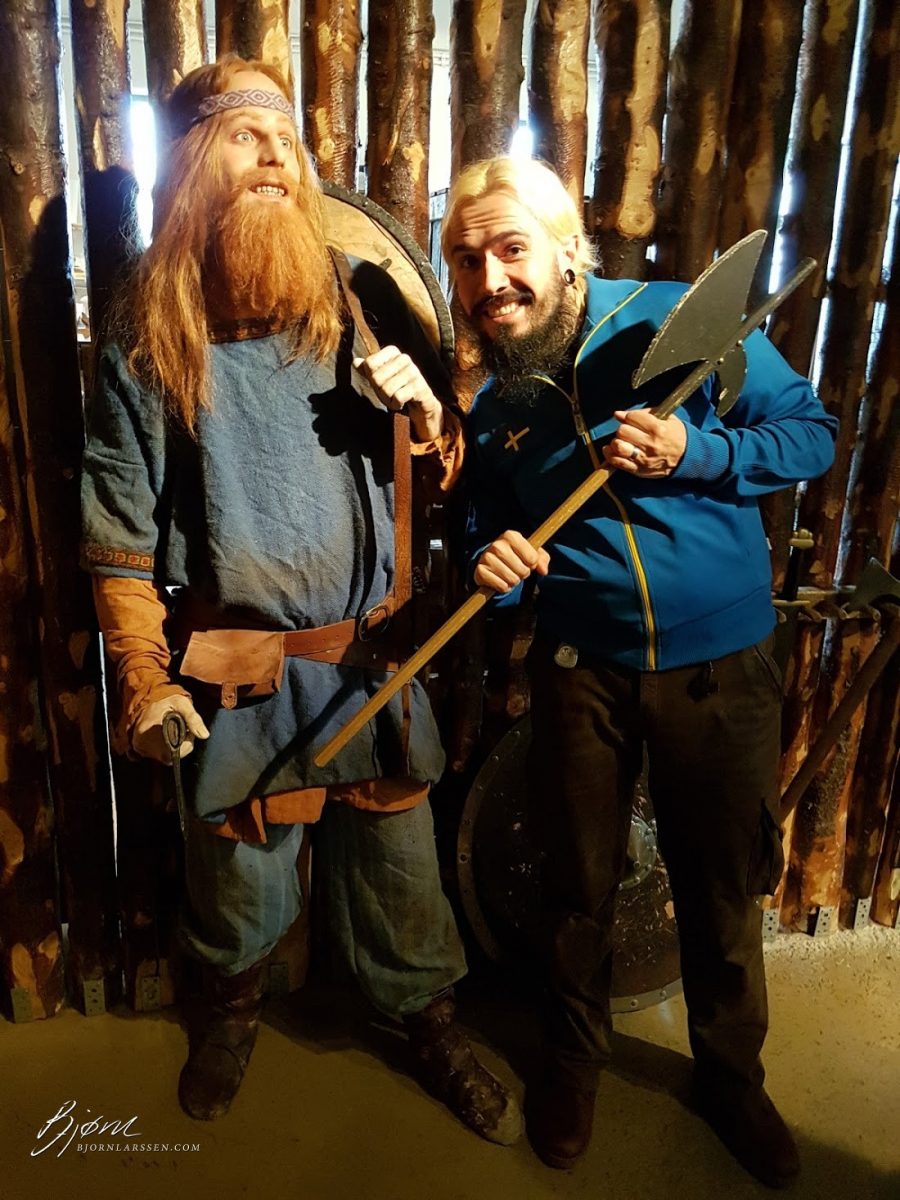 The Sagas are an incredibly vast collection of stories. A lot of people are aware of Ragnar Loðbrok (although most people don’t know that while Ragnar might have existed or not, his sons definitely had, and their stories outnumber daddy’s by roughly a factor of ten). From what I saw at the museum I was most fascinated by the story of a nun called sister Katrín. I am very tempted to try my hand at turning her story into a novella. I will keep you posted on how that goes. 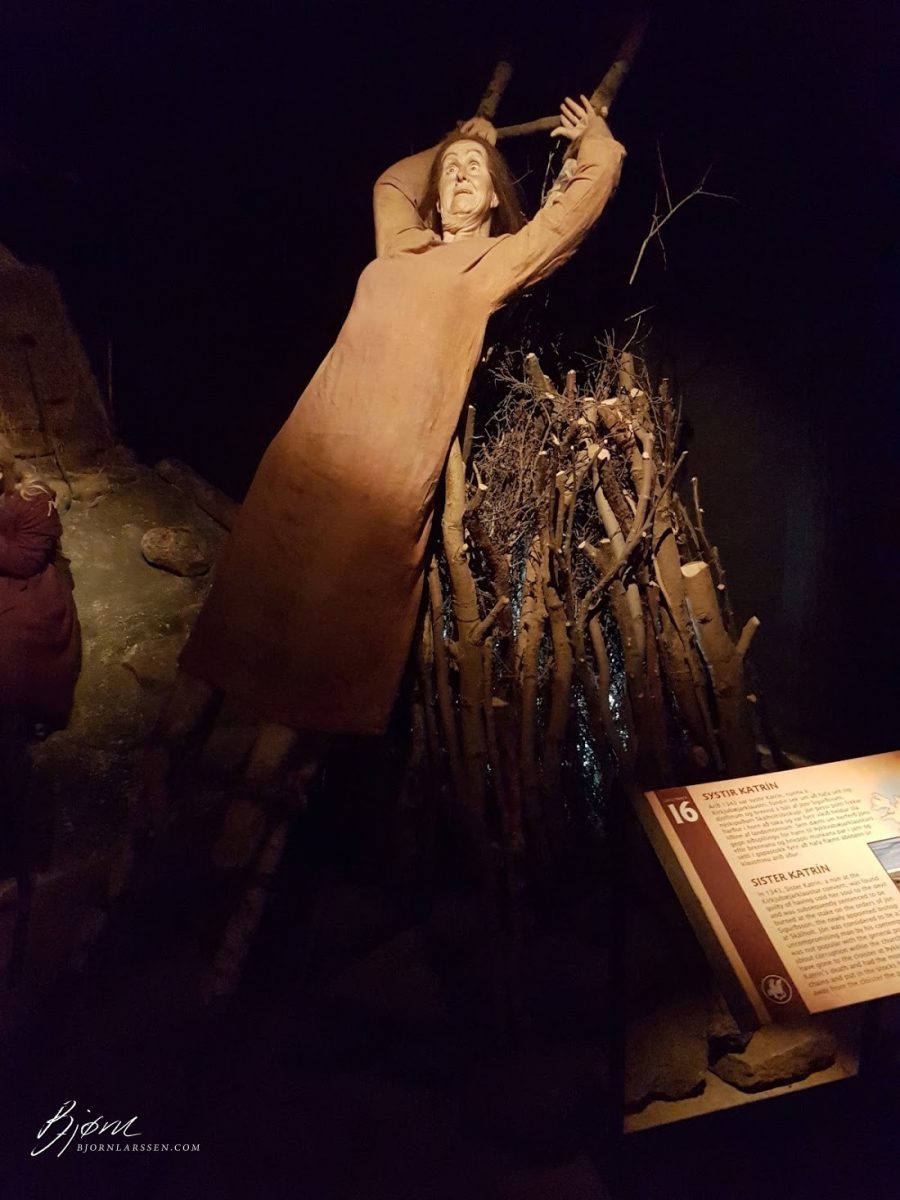 Perhaps this proves my real mental age is 14, but I would absolutely recommend a visit. While visually the museum was a bit less exciting than I would like it to be – a commentary of two minutes accompanies one wax statue – it managed to expose the listener to quite a lot of knowledge without becoming boring. However, it is not a Viking museum that my brother expected, even if the website is the first hit I get on Google. It is a Saga museum. Don’t expect shirtless Ragnar and Rollo to appear, and you’ll have a great time. Pro-tip: I took pictures of all plaques with written explanations, and greatly regretted they offered maybe ten percent of the text in the headphones. As we were departing, I found out that it was possible to buy a programme with full transcript. I consider it one of the best purchases I made during this visit.

The National Museum was, of course, a very different beast. First of all, it is enormous, the way a National Museum should be. It spans the period from 9th century when Ingólfur Arnarson decided Reykjavik would be a nice place to live at until more or less 2010. Yes, you will see something related to Björk. Strangely, from the technical point of view this museum offered a rather difficult visual experience. The text boxes placed next to many artifacts were illuminated so brightly I would have needed to cover the text and give my eyes a minute to accomodate in order to see anything. 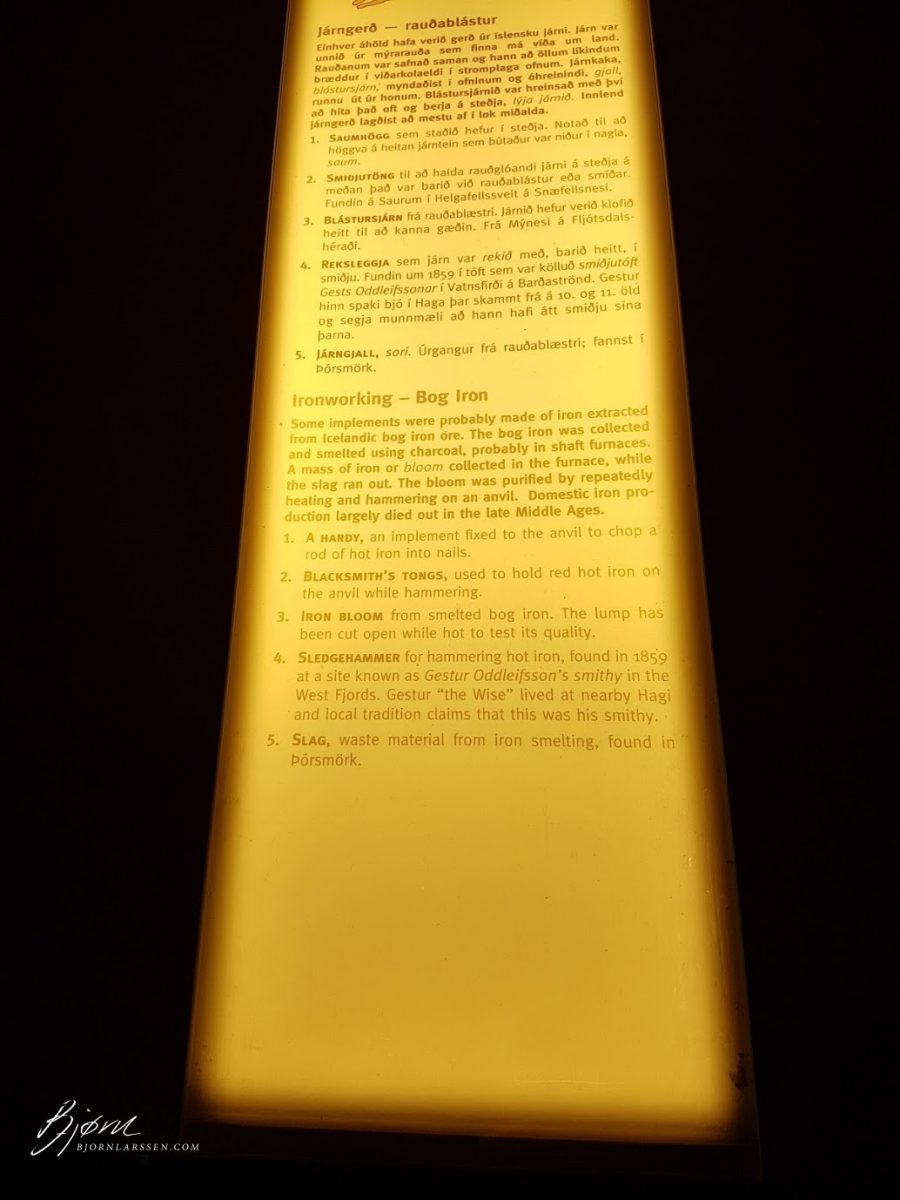 This is a minor complaint, just surprising for a museum so meticulously arranged. There are pieces of silver jewellery which look new hundreds of years after they had been made. A woollen glove from centuries ago which looks as if it was just bought five minutes ago, then accidentally ripped in one spot. Blacksmithing equipment from Viking times. Costumes. Embroideries. Stories of chieftains, bishops, politicians. Photographs. Paintings. And agenda.

It is, of course, very difficult to create a truly agenda-free presentation of history, because history is not made of facts. Had Hitler won the second World War, we would now be learning very different “facts” from very different books. But I left the National Museum with a strange feeling that the Saga Museum was more objective in its presentation. One man’s “torturing and executing those who did not ‘accept the Faith'” is another’s “extensively increasing the acceptance of Christianity”. Executions had indeed proven to be a very successful way of converting those who enjoyed being alive, but they were somewhat glossed over by the museum. 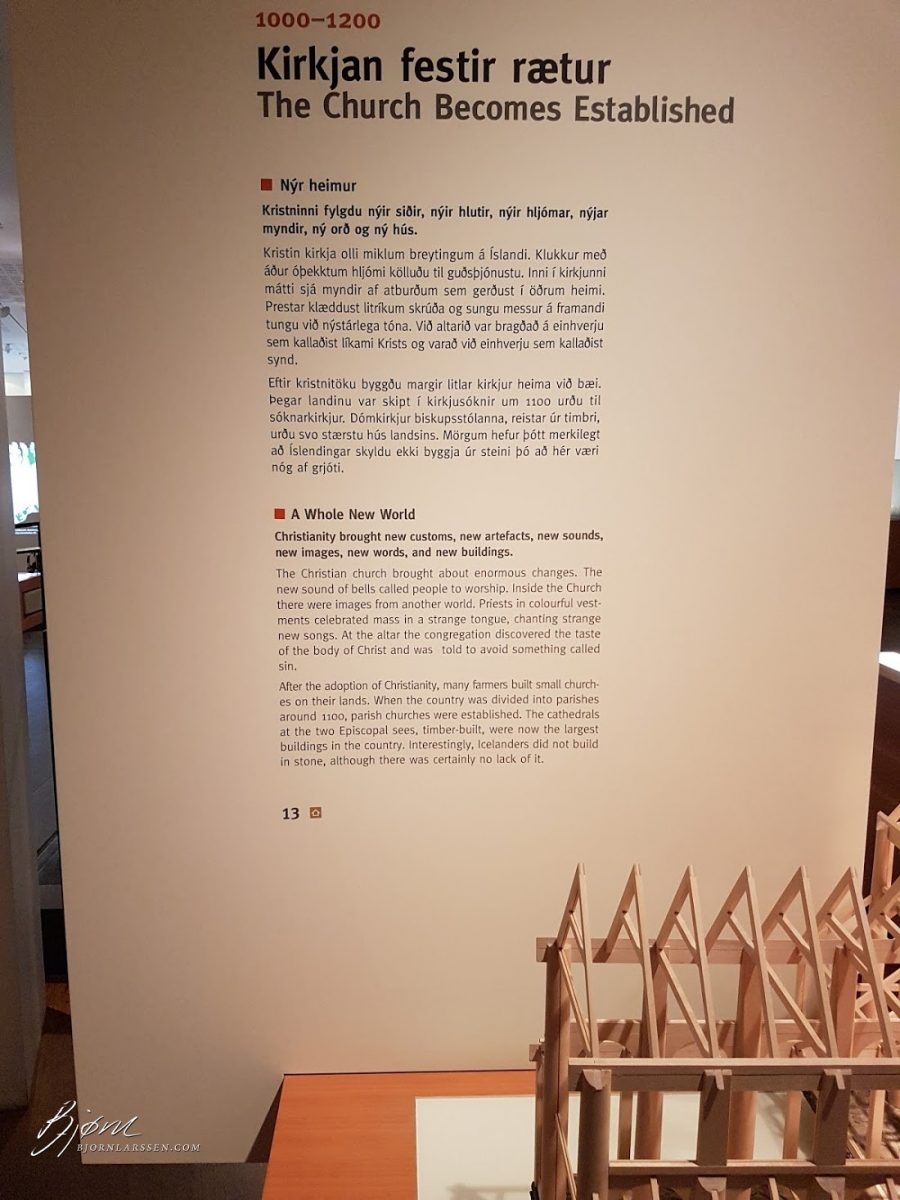 I was also somewhat surprised at the amount of times the museum’s curators found it apt to repeat phrases such as “Icelandic men…and also some women”. Bear in mind, however, that I have my own agenda that makes me mention those things, and not others. One of the motifs running throughout my novel in progress is that the same story told by two people will be at best similar. I believe the most objective non-topical museum I have visited in my life had been the Amsterdam Museum, but then…do I know enough to be certain of that? 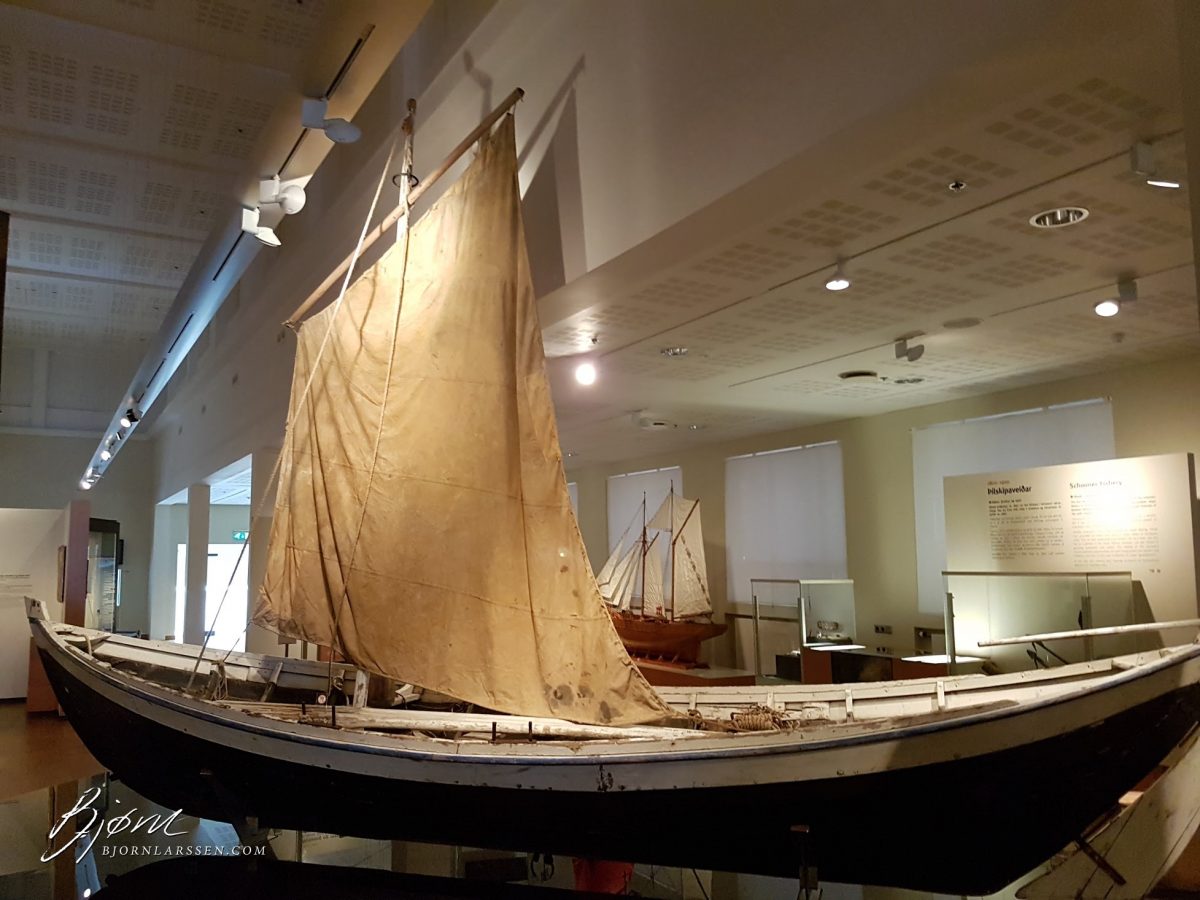 The fishing team of Captain Magnus most probably used a similar boat. 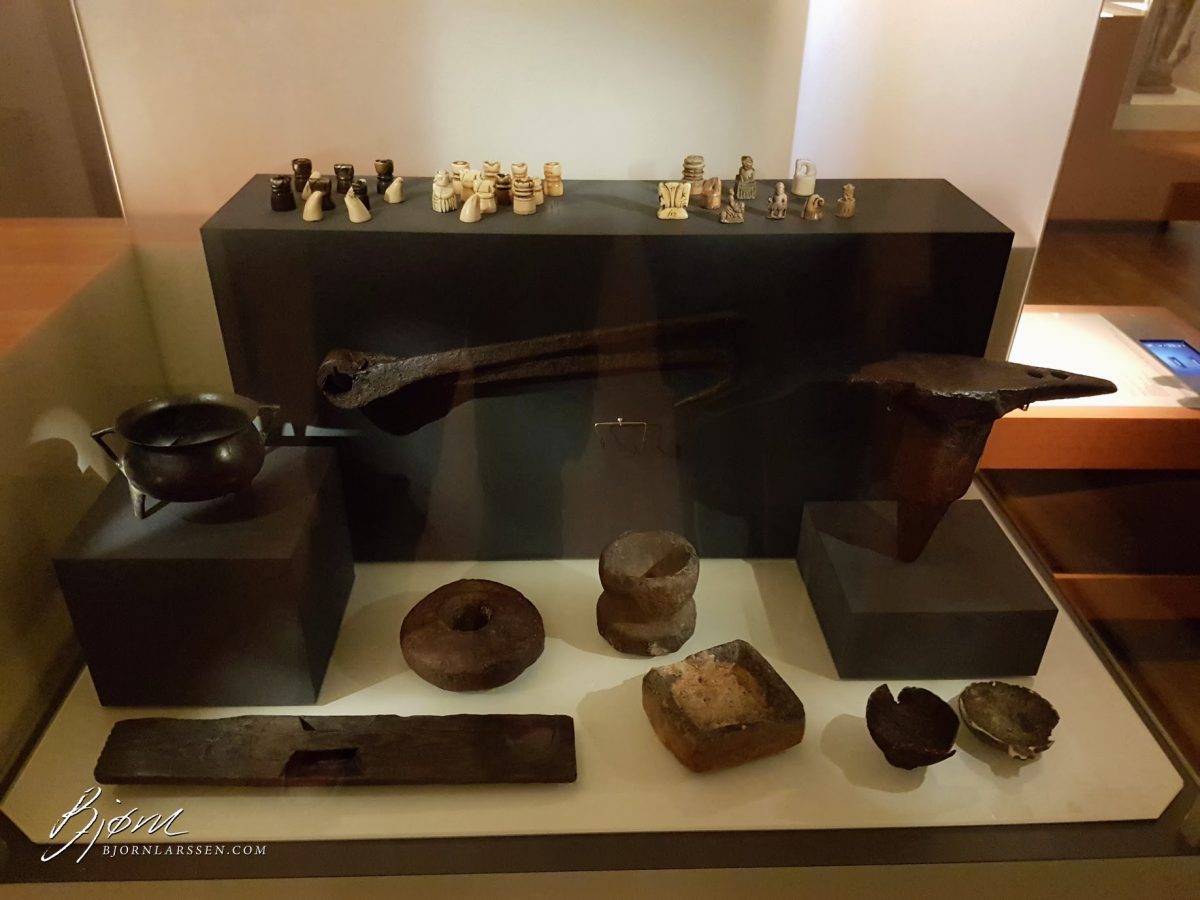 Why, yes. I might have a slight bias towards everything related to metalwork. 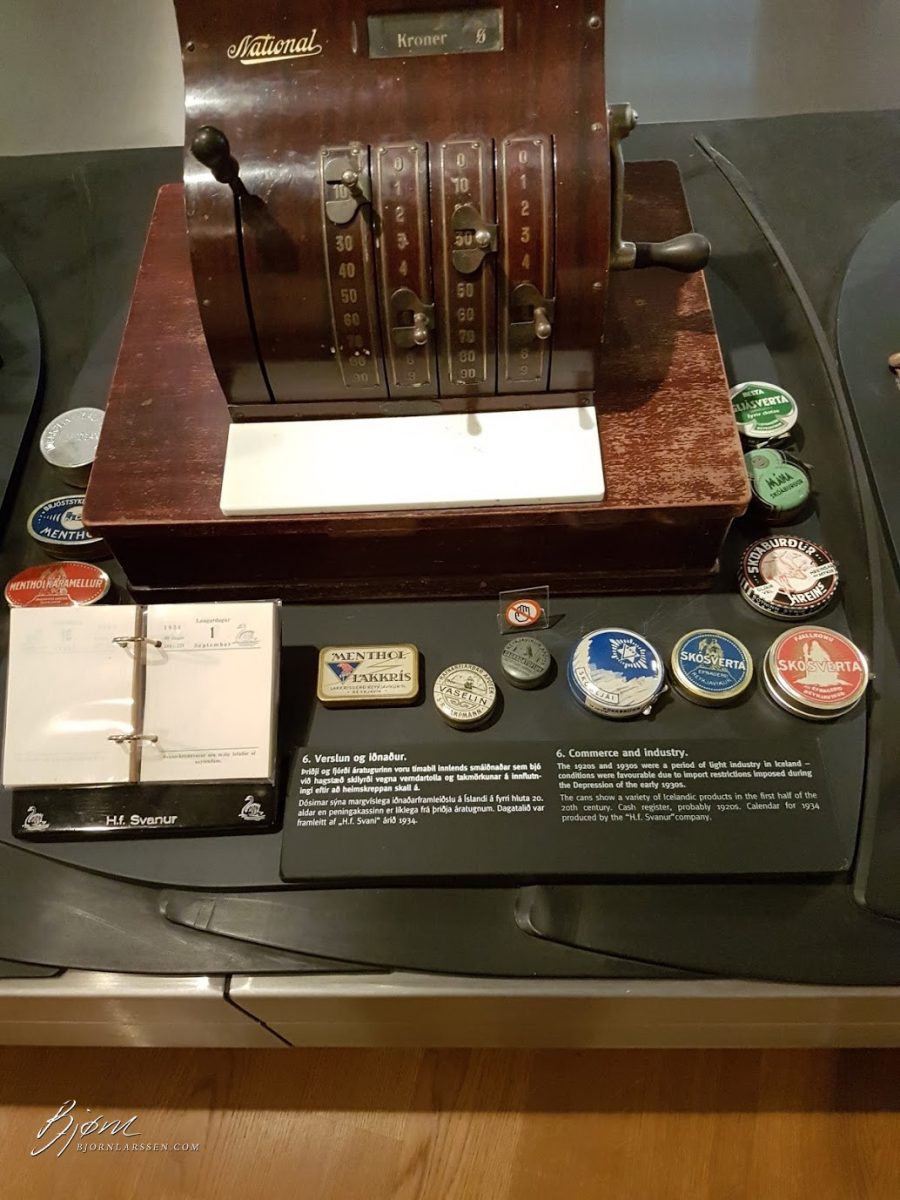 The reason why I wanted to visit the National Museum was to immerse myself in Iceland throughout the ages, and my wish was one hundred percent fulfilled. In fact, having spent three hours in there (we only left because it was announced through the loudspeakers that we had to), I started feeling oddly…responsible. As if I have taken too much upon my tattooed shoulders. I needed coffee, cake (the museum cafe = AWESOME), and a lot of rest afterwards to digest everything I saw, read, heard. Not once in my life have I devoted so much attention to history. When we arrived at the museum’s store, I got a tiny bit nuts. Unfortunately, unlike the Saga Museum, Þjóðminjasafn Íslands does not offer a full catalogue of everything (which is because one would need a truck to take it home), but I spent an awful lot of time staring at an awful lot of books. I reminded myself over and over again that I have a backlog of 200 or so books that I need to read, and that I already bought twelve new ones here in Iceland. But my heart exploded when I got to a full collection of Icelandic Sagas. How lucky, I thought, that they’re in Icelandic. I don’t need them! And then I saw the English edition. Five hardcover books in a box. If you click this link, look at the prices.

I will find a way to somehow make the purchase of this boxed set count as research. But not this time, because my credit card is in process of getting a restraining order against me.