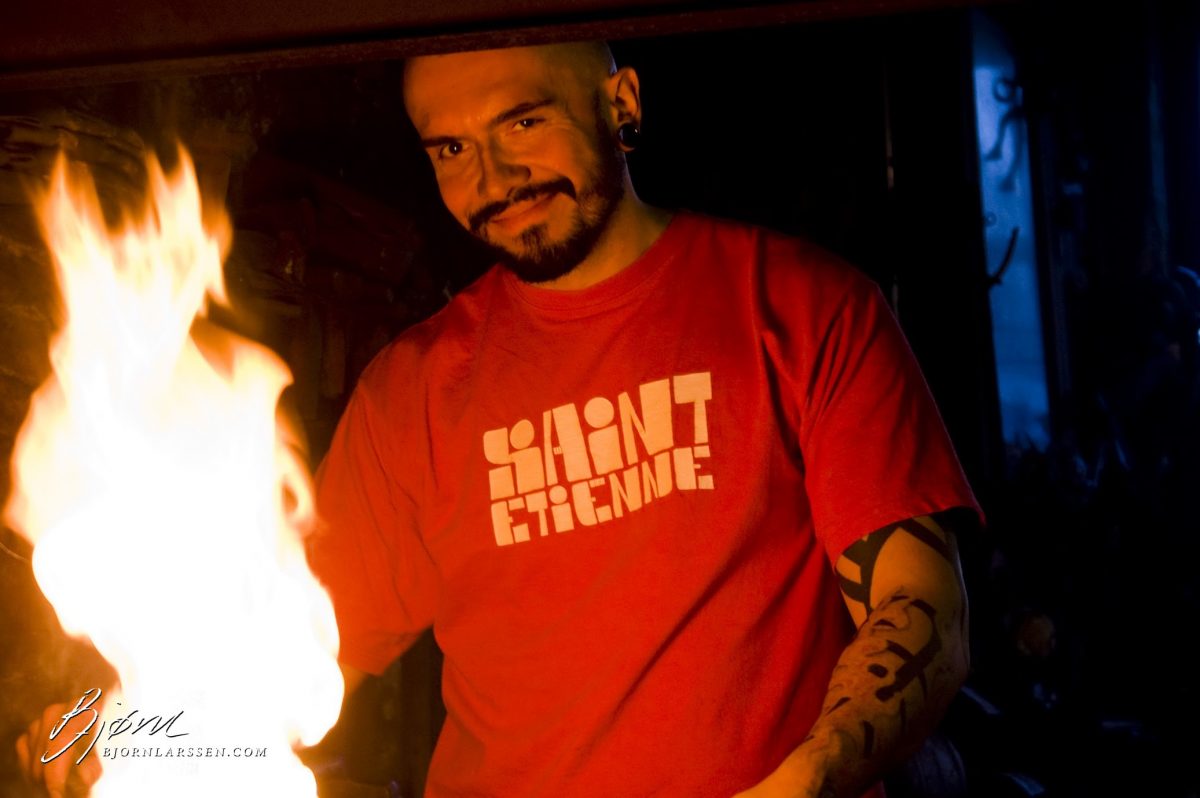 I’ve got some random memories from my childhood. Super-explosive diarrhea somewhere around the age of six (Sorry! I can’t help that this is my earliest memory! I do hope it’s not some sort of prediction for quality of my writing…). My parents fighting when I was around eight. Having seen a children’s movie called “Electronic Grannies”, where an electronic granny went rogue after rain caused her Z80 processor to crash, then getting a nosebleed out of fear as I was staying with my granny that night. But the earliest happy memories I have all involve myself sitting by a bonfire and being happy.

Back in the 80s, when Poland was still waist deep in Communism, you could buy cheap holidays via your work. The choice was limited, but for that price nobody really cared much (also it’s not like you could go anywhere else, as in Communism for some reason each company had their own holiday “resorts”). Every time we went the fun started with what was called, roughly translated, “an evening to meet each other”. This always involved two things. Tons of alcohol, which I didn’t partake in, and a bonfire. Other kids ran around, meeting each other. Someone would inevitably play guitar. I would sit in one spot, staring into the fire, feeling happy. My mom and stepfather were very pleased, because I caused absolutely no trouble. I’d be allowed to stay up as long as I wanted unless the fire went out first.

This never changed. I spent the New Year’s Eve ignoring the explosions, staring into the fire (I have my own woodburner these days! No need to meet anybody!), and feeling happy.

When I was looking for a new career after a burnout (hoho) ended the 14 years of my work as a graphic designer, I was asked to list 15 things that made me happiest, related to work or not. First eight or nine were easy, but then I ran out and started writing about things that made me happy in general. One of them was, of course, fire. I apologised to the coach, saying I simply couldn’t come up with anything more. She told me everything was important. A few weeks later I found out that blacksmiths still existed, they worked and made a living, and that I might be able to take a blacksmithing course. Suddenly I knew what I wanted to do with my life. Forging ticked almost all of the boxes – I would create tangible products that would last a long time; I would work on my own and be able to point at something and say “I made this”; I would be working physically; but most of all, I’d get to play with fire all day and possibly even make money out of it.

I always call myself a “passive pyromaniac”, by which I mean that I would never do anything illegal, but if someone else happens to set a car on fire or if there’s something burning and it’s dark enough to see flames, I might be found nearby staring without moving, fascinated. I joke (“joke”) sometimes that you could kill me by supplying me with a huge amount of firewood and leaving me alone until I starve to death. This is most probably not true. Most probably. 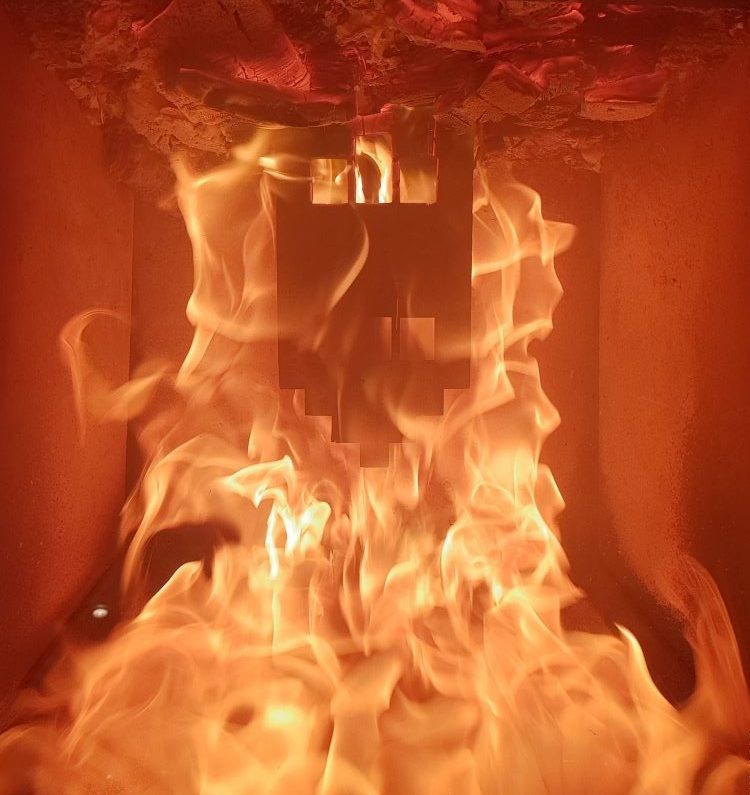 Yes. This is a house burning inside my woodburner. Long story.

I think a large part of my fascination with fire comes from my knowledge of how dangerous it can be. Anybody who lost their house in massive fires this year will attest that there is a large difference between owning a gas stove (by the way, as a pyromaniac who knows what he’s doing I am terrified of using gas and I want to own an electric cooker) and watching all your belongings burn. This might come as a surprise, but forges are among the safest places to play with fire. Not just because we’re aware of dangers that come with it, but also because coal doesn’t spontaneously ignite. Sometimes I had to start the fire three times until I got the coal to ignite at all.

The fact that I don’t drink or use drugs helps me feel safe with my woodburner. Mostly safe. Because a few times I opened the door to add some more wood, and a small, burning piece of wood would suddenly jump out far enough to fly over the protective iron sheet and reach the carpet. I never leave a fire unattended, even if it’s a tealight candle in a seemingly super-safe spot – before I leave the room even for a minute I will blow the candle off, then light it again when I return.

Coincidentally, if you have seen the viral photo of a guy using an electric grinder to cut something and a fountain of sparks hitting the oxygen and propane bottles, you might be surprised to hear this wasn’t dangerous as long as there were no leaks. Those bottles are THICK. Those sparks look like they’re dangerous, but if you stick your hand in them from a safe distance, which is much less than you’d think, you might end up with itchy skin and nothing else. I am still afraid of gas, because sometimes leaks happen, but also I happened a few times to be cutting off chunks of very hot metal, and the cut-off piece would land on the rubber hoses. THAT IS DANGEROUS, because red-hot metal doesn’t cool down within half a second and rubber is made, er, of rubber.

Oh, the (LEGAL AND SAFE for everybody but myself) things I have done with fire… You might have noticed the photo of myself spitting fire on the roof in the previous post. This was long ago, and I had no camera capable of capturing a good photo in the dark. What people mostly don’t know is that the fuel used (at least by me) is paraffin, and the art of spitting fire is the art of spitting the paraffin out in a way that turns it into very, very small drops. The fire itself is much less of a danger than accidentally swallowing some of the fuel – as long as you don’t aim at anything flammable. Pro-tip: your friends are flammable, no matter how much you drank or smoked, who’s holding your beer, and how amusing the idea it seems to be. 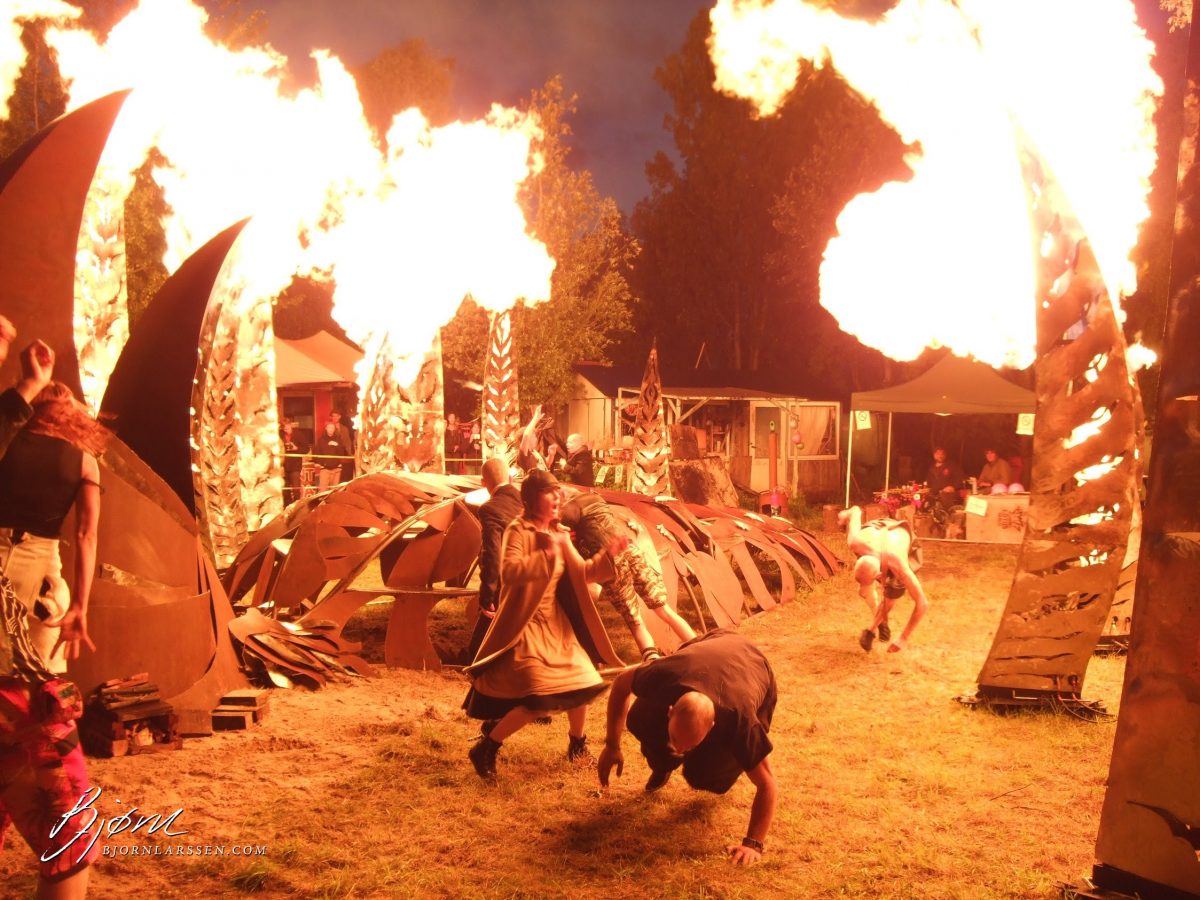 If you don’t believe me, spill some paraffin into a metal pot – or anything else that is unlikely to break or melt in heat – and try to light it up. This is why oil lamps require a wick. This is also why the flame doesn’t start in my mouth but only once the drops heat the torch I am holding, and why I still have a beard. Interestingly, this is also why many fire performers tend to be half-naked. Not because sex sells, but because it is much safer to get a burning drop of paraffin on your skin than on a, say, polyester jacket. 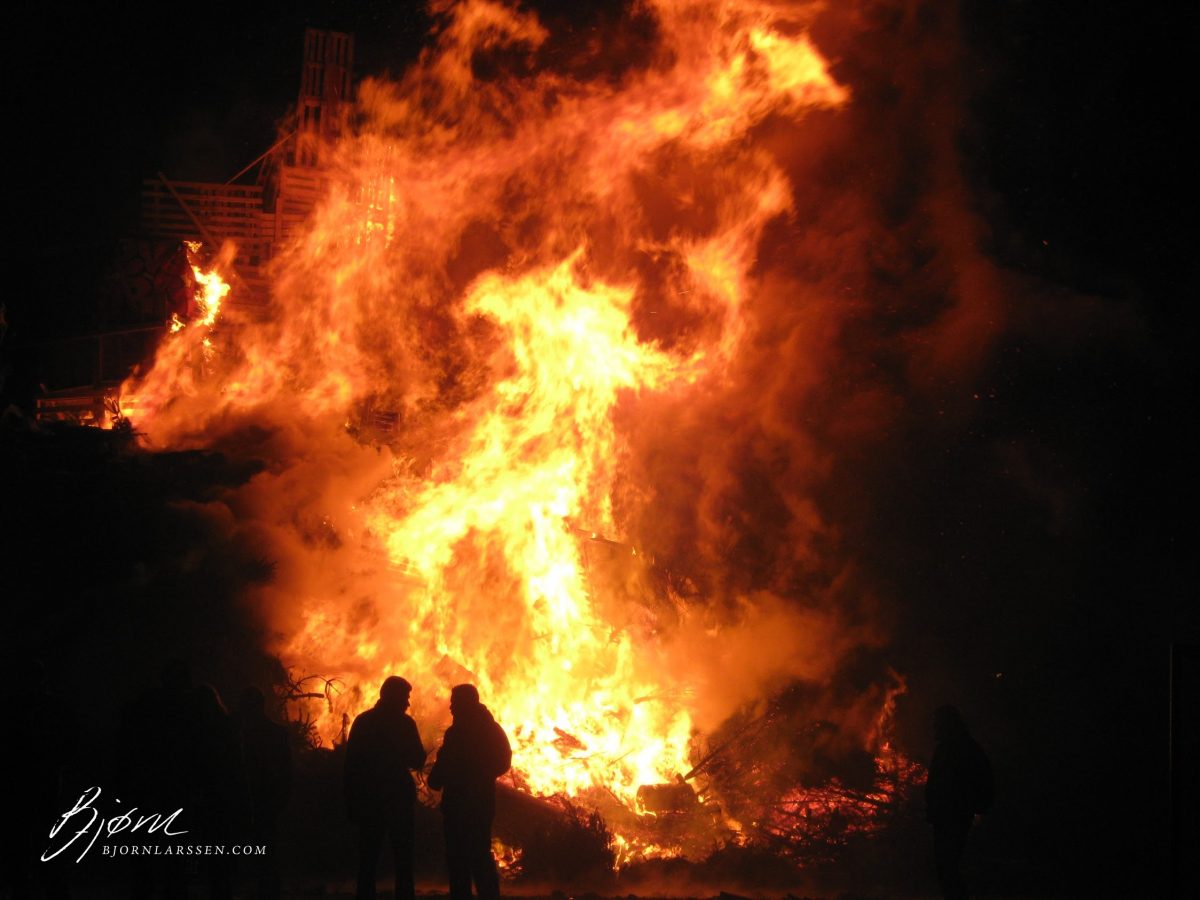 The bonfire was actually getting smaller at this point.

I attended the New Year’s Eve bonfires in Floradorp, a tiny village near Amsterdam. I’ve witnessed the largest one of them, where flames shot 30 meters (100 feet) into the air (see above – the silhouettes are of my brother and me). I’ve seen fire performances, out of which the most exciting one was built by a properly crazy pyromaniac artist who turned an entire building into a fire-powered instrument. Fuel was delivered through metal pipes of various lengths and thicknesses, and at the press of a button you’d hear a roar or simply a whoosh. The inventor used those sounds to play a really hot tune. (Sorry not sorry.) Husby, who is somewhat afraid of fire, kept pulling back, hidden behind my back, I, of course, kept pulling forward, wanting to be as near as possible. An awful photo below. 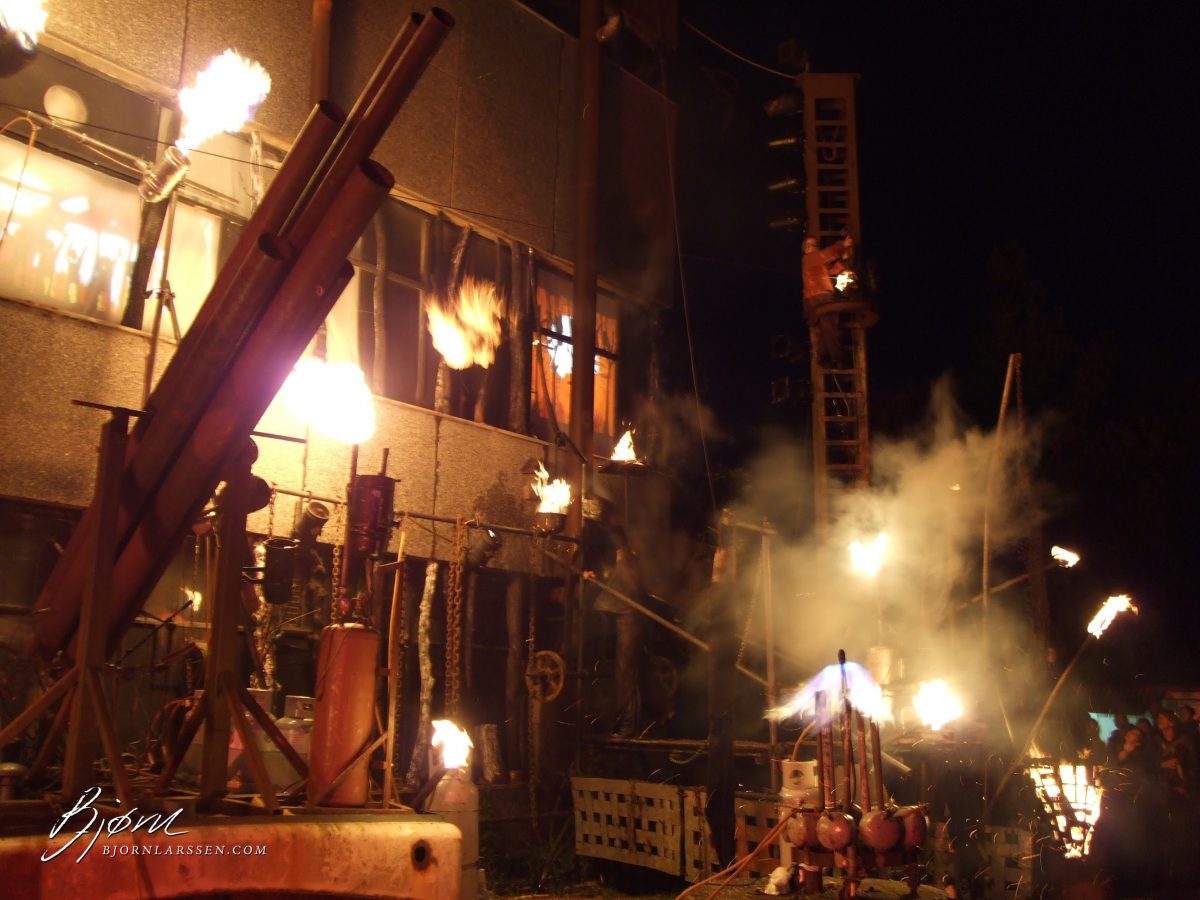 One day I will find this artist and we’ll work together on – who cares what really?

This year, the NYE fire spread too far in the town of Scheveningen and the one in Amsterdam was much smaller than usual, which leads me to believing it might have been the last time. The traditional burning of xmas trees has been cancelled indefinitely, as it became too popular. (I swear. This country.) It’s good for the environment and I’m aware of it (although it would be interesting to compare the amounts of CO2 emitted with the amount of gases emitted by fireworks). Burning coal might soon become exclusive to blacksmiths until we, too, are forced to switch to gas fires which are much safer (? – gas-o-phobic), allow to regulate temperature to avoid burning metal, and they’re also mind-numbingly boring.

When you’re not actually trying to burn anything… (governments and corporations excepted, because fuck them)

The climate change is already contributing – and will continue to do so more and more each year – to enormous forest fires causing incredible damage, both financial and to the environment, and many deaths. While I would quite like to find myself at barely safe distance from a forest fire, I have enough brains to mourn both the nature and the people who lose everything they own.

This is why I am a passive pyromaniac. If I set something on fire, it’s something I own (or myself). If I put someone in danger, that someone is only going to be me. Before spitting fire I ensured there was nothing flammable around and that Husby was in a safe distance. I’ve never done it when wind gusts came from random directions. Because being an educated passive pyromaniac means I am aware of what is and isn’t mostly safe. Mostly, because as much as we’d like to think we do, humans can’t really fully control fire, as evidenced by the link to what happened in Scheveningen.

Alcohol is dangerous. We own a bio-ethanol fire which we rarely use, but sometimes we do. The bottles the bio-ethanol comes in (it doesn’t emit any by-products except, strangely, water) say, in big letters, DO NOT REFILL WHILE THE FIRE IS STILL BURNING. One single time, when I have, ahem, consumed some drinks, I tried to do that. I…wouldn’t recommend it.

Gasoline is dangerous. Please don’t make me explain why.

Miley Cyrus is dangerous but I think she learned her lesson now.

Gas is dangerous. So is throwing away a cigarette butt in dry weather. Glass that focuses sunlight on, say, a patch of grass is dangerous. Wood cuttings left around are extremely dangerous – give them a chance and they will be burning brightly before you say “oops”. An open fireplace means you must ensure nothing flammable stands in front of the fire and it might be a good idea to have a fire extinguisher at hand just in case. Burning plastic, rubber, leaves (interestingly), building coal-powered power plants while hosting a climate submit – dangerous in ways that have nothing to do with accidentally spreading the fire around. Leaving an open flame unattended – very dangerous.

Happy childhood memories of sitting by a fire and thinking of nothing in particular – few things are safer.

In the next instalment I’m going to talk about heathen traditions and deities related to fire.

What’s your favourite element? Are you afraid of fire or do you accidentally watch anything that’s burning bright?
Have you taken part in Hogmanay or Up Helly Aa?
Does The Burning Man actually involve burning anything or just having tons of sex with stoned hipsters?

PS. Again. Be super careful in dry weather. Avoid building houses in the middle of the forest without safe distance between the trees and the building. Don’t burn plastic, rubber, chemicals. And, for Gods’ sake, know what you’re doing.