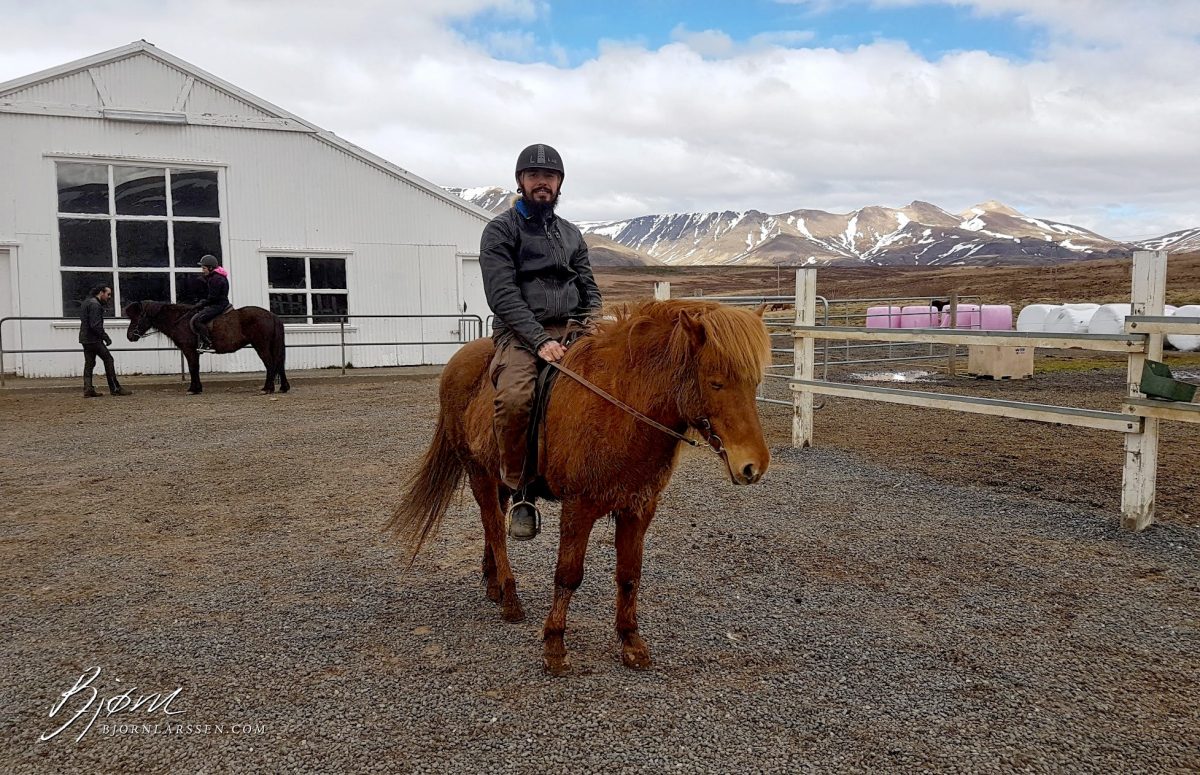 Let’s get one thing out of the way. Stjarna (my new girlfriend, pictured) is not a pony. Icelandic horses are small, compact, strong, have incredible endurance, lots of patience, and ability to cross very rough terrain. Which I experienced.

In my novel, Gunnar the blacksmith is an owner of a horse called Karl. Karl is – guess what – small, compact, strong, patient, and very strong-willed. Karl is also kind of self-driving, which allows Gunnar to get in the saddle, sort of doze off, then wake up when they arrived in town. This was a part of in-person research that really worried me, because reading about horses while never having been on one didn’t fill me with confidence that I will be able to accurately describe the experience. Therefore I made a decision which was, no joke, very difficult. Because I suffered two spine injuries almost three years ago. I spent most of 2016 in so much pain I could barely move, building piles of pillows to keep me at this one exact angle where the pain was least excruciating. Towards the end of 2016 I gave up on the idea that I would ever have a pain-free life, and decided to end it. I didn’t. Instead, on January 1, 2017 I started work on the novel.

Getting on a horse, for me, brought risks different to those it had for others. While the injuries are as “fixed” as possible, I still occasionally require heavy painkillers, and some parts of my back have most probably degraded due to the fact it took way too long to diagnose the actual problems. I knew what I was getting into. I knew there would be price. I hoped it wouldn’t be too high. But at the same time, you only live twice, and I felt my previous life ended in 2016. Having considered all this, I decided I would take a ride, and booked one with Laxnes Horse Farm. I had no interest in their day tours, I only wanted to experience the Icelandic horse.

On our way I started getting somewhat anxious. Like, “I wish I brought a diaper” anxious.

“Are you OK?” asked me one of the guides, handing me a helmet.

“Because I just realised horses are living creatures.”

I am a child of the city, trying to make sense of living in nature. There’s nowhere I would rather live than a log cabin far away from people, but I still shriek when a spider finds its way towards me. And the problem with a horse is that it doesn’t have a steering wheel, set of pedals, or buttons.

I had the steering sort of explained, and tried to do it. Stjarna gave me approximately 10% of her attention. Yes, she reluctantly turned left or right when I pulled at the reins, but that was about it. I could sort-of-kind-of make her stop, but there was no way she would start moving when I wanted her to. (This, by the way, is incredibly useful research for my book, because obviously Gunnar’s horse is going to be exactly like this.) At one point, the guide’s horse was ready at the gate, and Stjarna – again, unprompted – positioned herself right behind. Then the gate opened, and we started moving. “I guess I decided to go first,” I announced into thin air, hearing some shrieks behind me. Husby was nowhere to be found, and later told me his horse (uhhh… Indiana Jones) decided to go last. 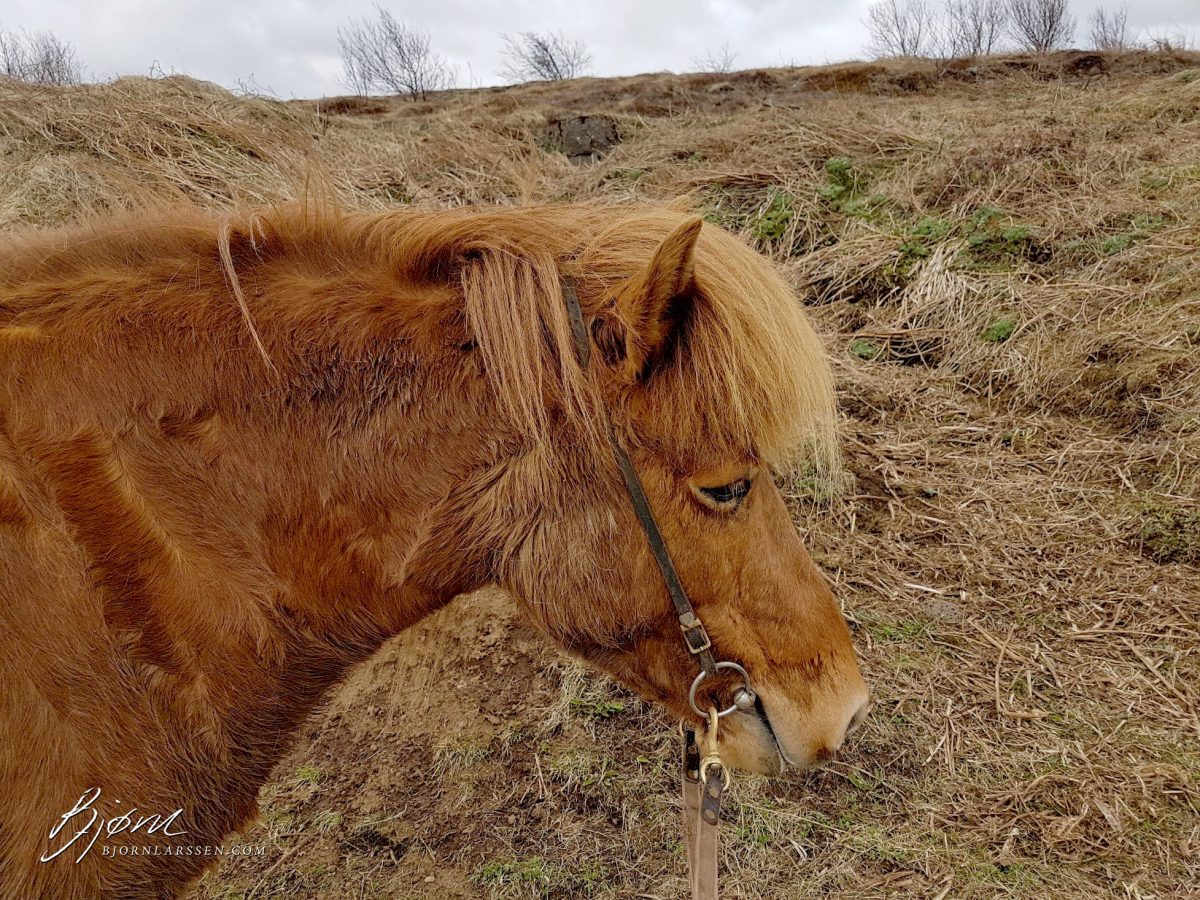 (This is Stjarna thinking “I am SO over this, can we go home yet, because I hear Netflix calling my name”.)

Without a warning, we started moving faster, going from the “pffft this is so easy” gait to “OMG I MIGHT DIE” gait. (I think that’s called “trot” which is somehow mure humiliating.) More shrieks followed, and some of them might or might not have come from me. But that was still OK. Even when we were going downhill and I was as relaxed as an average statue. Until we got to a nice stream.

“How funny,” I thought, looking around. “We can’t go either left or right from h–”

Stjarna LOVED water. She loved it so much that while most horses picked the shallowest spot, she decided to get herself thoroughly cleaned. Well, herself and my boots. The inside of my boots. (The farm offers riding boots, but you have to ask for them. I was kind of expecting to be babysat like an American that I’m not, so I didn’t ask.) I could feel her horseshoes slipping in the water, and I prayed for my life.

Somehow, we survived. One of the guys’ horse was in a mood to, eh, horse around a bit. The guy would sometimes shout “I guess this is goodbye!” or “I see I decided to take a break”, as his horse – just as self-driving as Stjarna – did whatever it felt like doing.

I said to one of the guides that I was doing research, and this was the most exciting research I have ever done in my entire life. I felt fantastic. Grin hadn’t left my face for a second. We got to a spot where we took a break, I got off the horse, back on, then again, and I was super pleased that it was actually something I could do – I was half-expecting that I would need two bodybuilders and a wooden box to get on a horse, then end up sitting with my face towards the horse’s back. 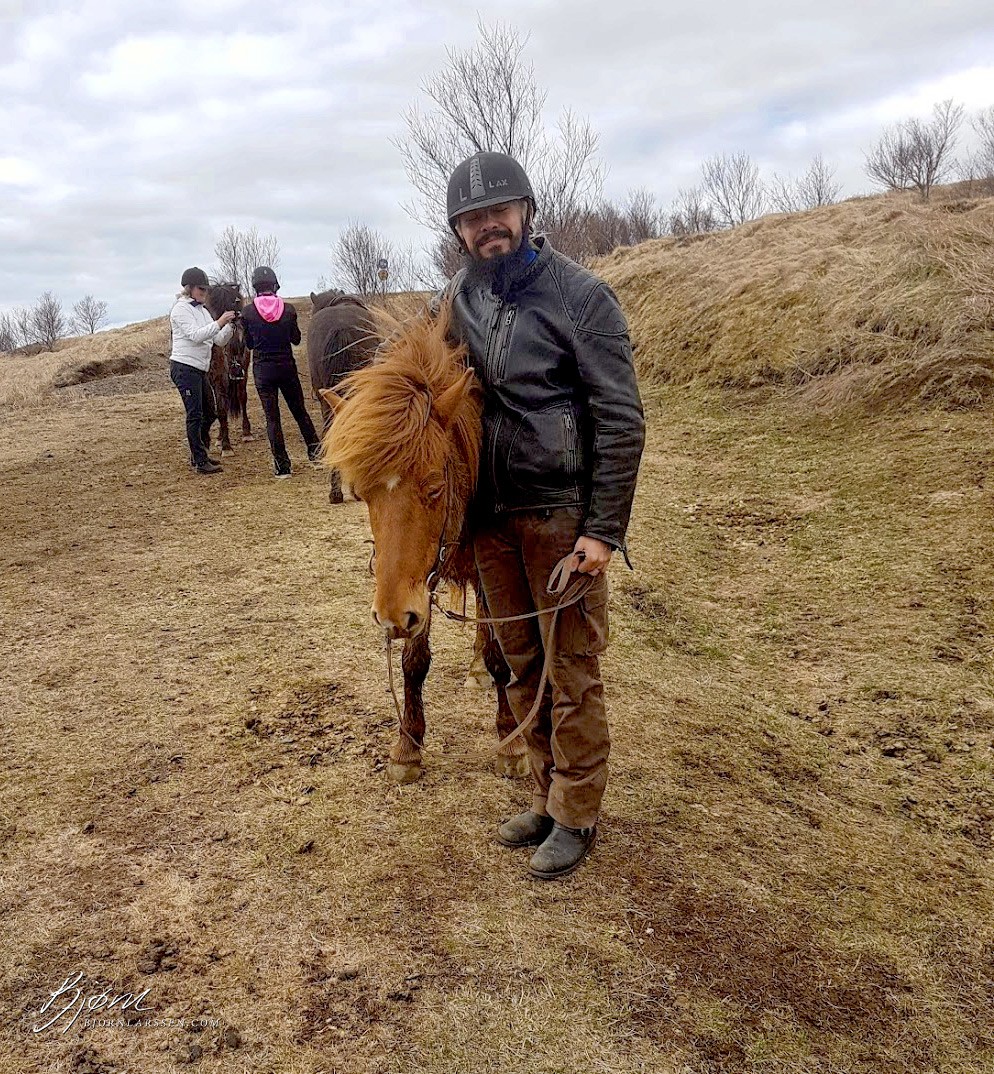 (I think both Stjarna and me blinked at the same time.)

The way back was exactly the same, except faster. The tour takes 1.5 hours during the winter period, and 2 hours outside winter period. I’m a greedy bastard, so I was all like “I want two hours! Give me my extra half an hour!” and oh yes, I got that half an hour alright. Except both Husby and me ended up looking greedily towards the direction we expected the farm to be. Trust me, two hours is enough.

When we arrived back, I thought, well – now that I am a super-experienced rider, I’m going to park Stjarna WHERE I WANT. Hella no. She picked a spot next to another horse, and decided to stay there. “I guess you’re staying there,” I said in a resigned voice.

We went inside for a coffee. As our hands, bums, legs, and other parts continued to shake, we were invited to grab some coffee. When I asked who shoes the horses, I found out it was the guy helping us recaffeinate, Haukur. Immediate BFFing followed. And this is where I’m going to go on a tangent, which always irritated me in books. A lot of authors don’t bother researching blacksmithing in the slightest. Sharpening swords with hammers. Hitting the iron and making sparks fly around. FYI, that means the iron is burnt, and you can throw it away, unless you’re forge-welding, which is not what one does with swords. Because in books blacksmiths always make swords. Unless they are making gleaming horseshoes. 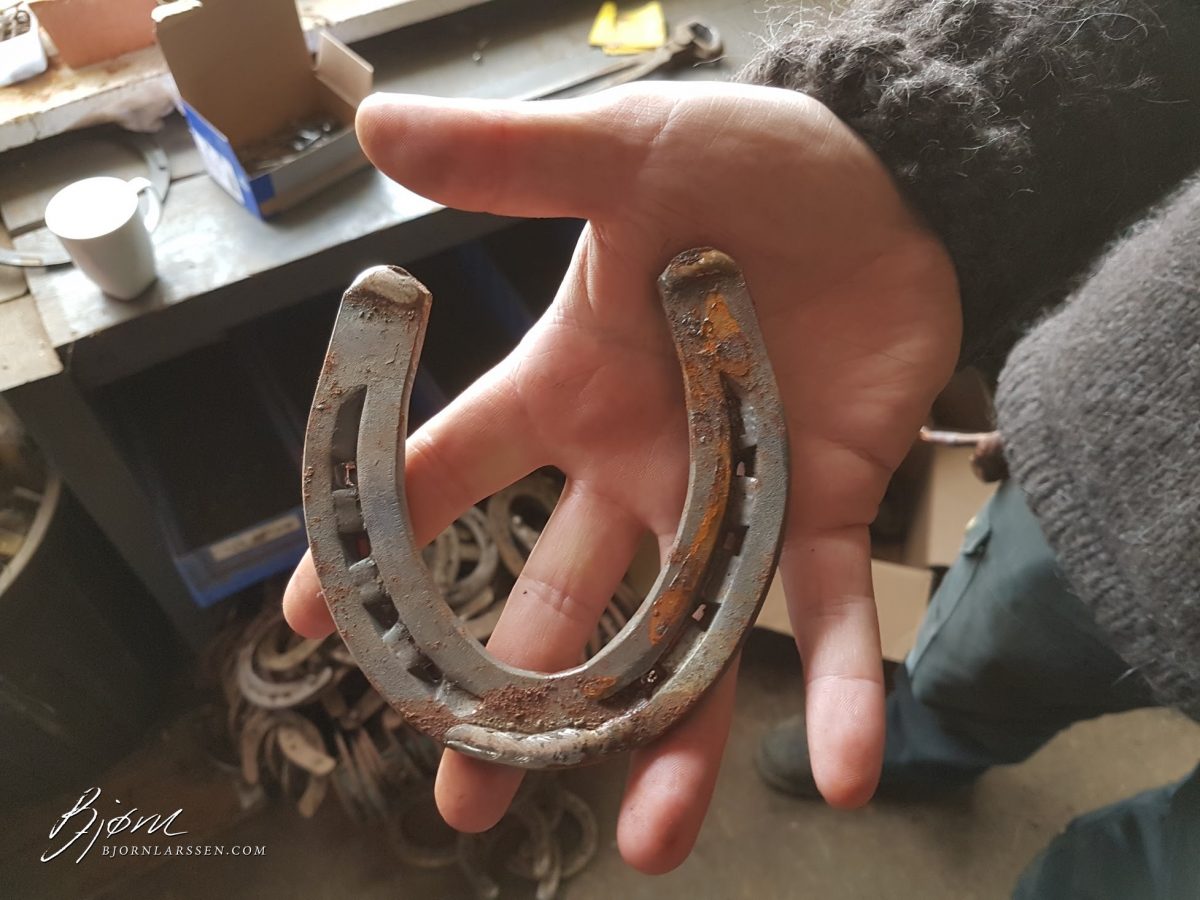 I suppose this…could be called gleaming in some sort of light? I asked Haukur whether he was using any finishing at all, but no, this was just standard low-carbon steel. A horseshoe lasts between 6-8 weeks, at which point it generally gets replaced. Similarly as with tires, all shoes need to be more or less at the same degree of being worn out, so you don’t replace a worn out with a new one. Therefore the shoes generally get used twice, giving them a useful life of 12-16 weeks. The funny thing is that once they are actually being worn by the horse they become somewhat gleaming, because the soil and rocks tear off the rust. 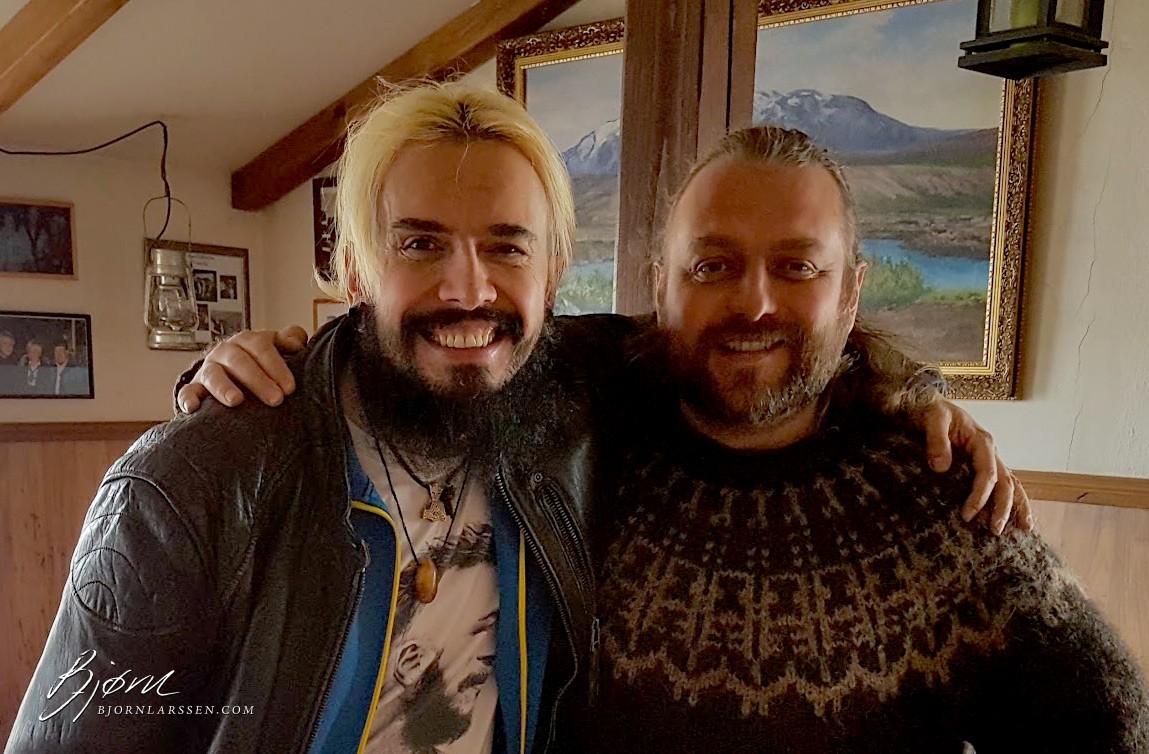 I am not a t-shirt buying sort of person, but I bought one before you could as much as blink. I SURVIVED THIS.

The day after every single bit of my back hurt so bad I had difficulties breathing. As if my ribs became too tight, and stopped the lungs from properly expanding. It had been very different to say “yes, I am ready to suffer”, rather than, you know, actually suffer. The second day I could breathe again, as long as I spent most of the time sitting. Today is day three, and it’s getting much better. Knowing the amount of pain I would go through later, I would have done it again in a flash. In fact, had it not been for the (uhem… TMI coming) fact my bum is bruised, I would be doing it today.

I ran… er. I crawled towards the sofa to quickly make notes about the ride. I will still need an actual rider to take a look at this part of the novel so I don’t end up with the equestrian equivalent of “the blacksmith making gleaming horseshoes”, but the biggest problem is that I am completely in love with Stjarna, even though it doesn’t seem reciprocated at all.

To finish it off… they look very authentic, but I think I should clean them a bit, whaddayathink…? 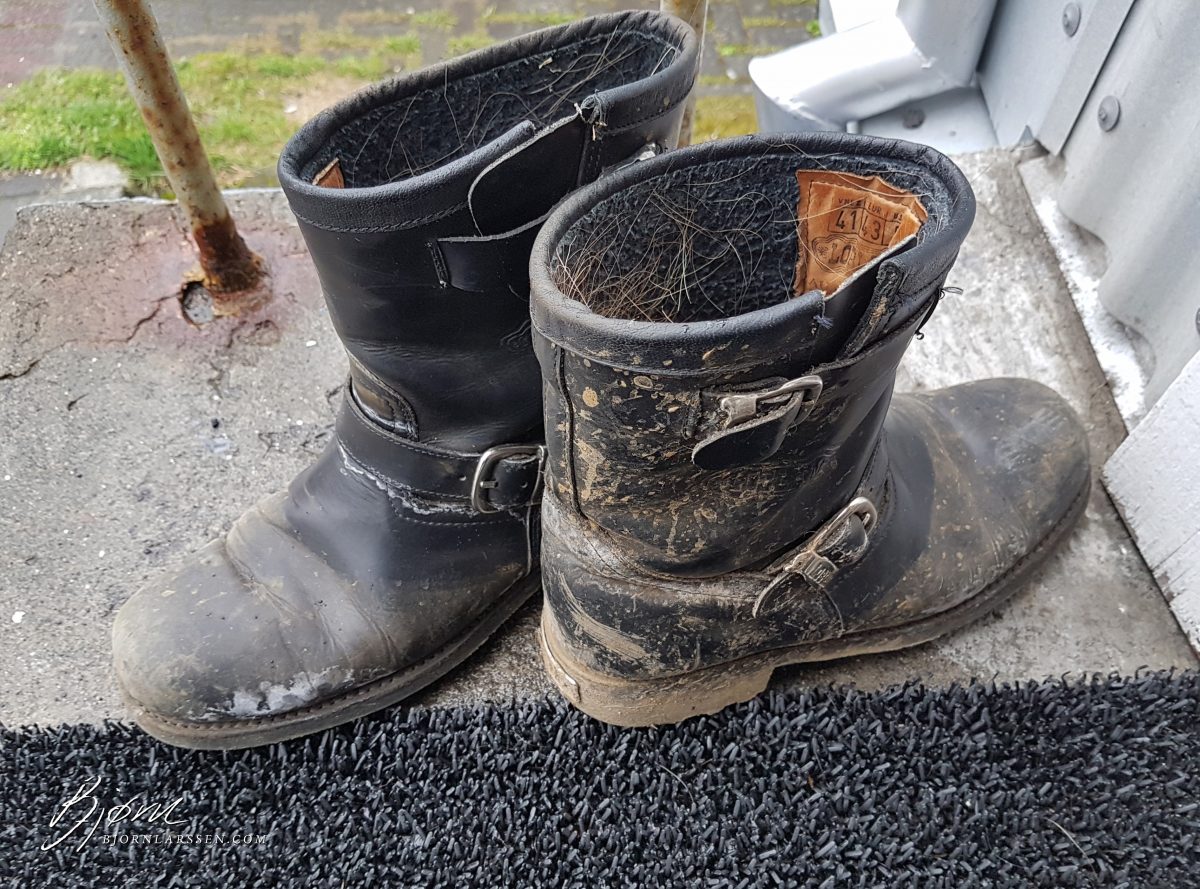 I love doing research, even if it hurts for days.