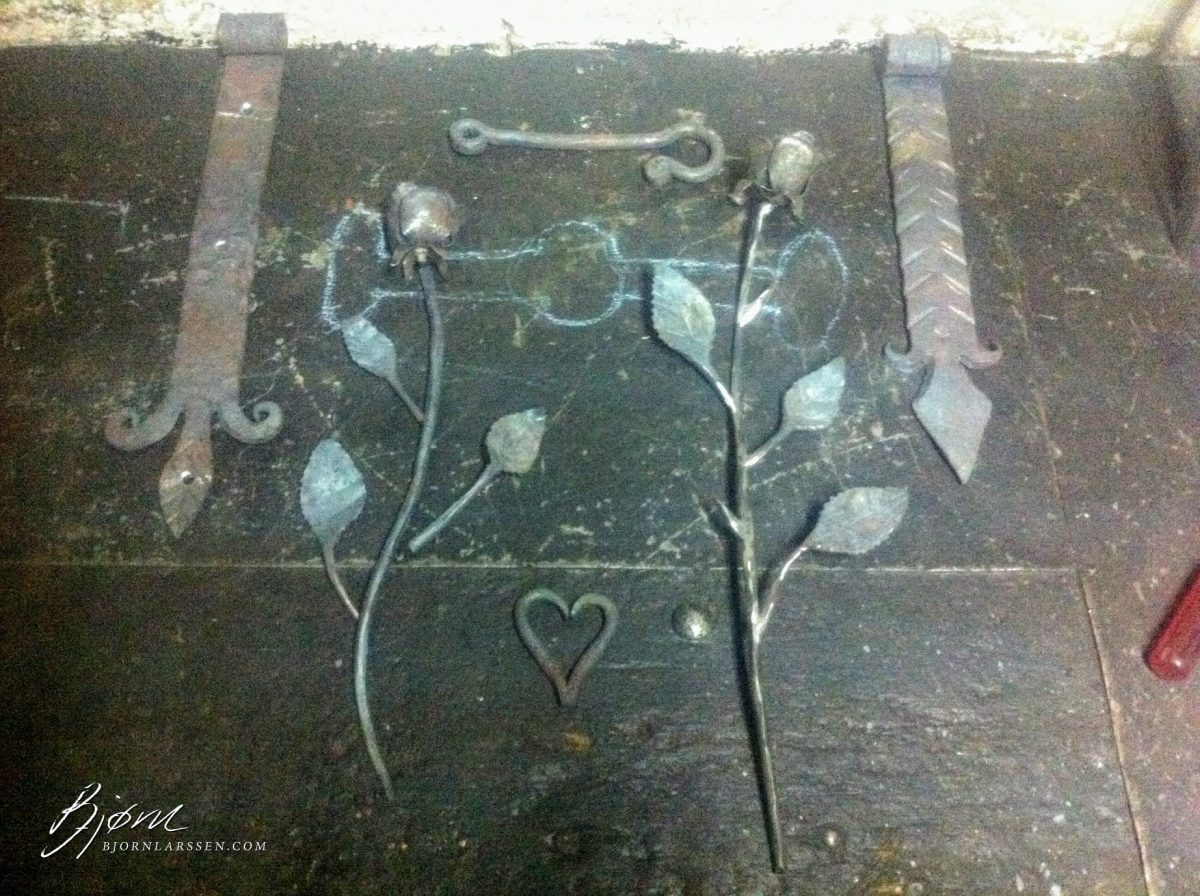 At this point in my life I was still used to always getting what I wanted. Although “getting” is not the right word. Perhaps “acquiring”? The way I went about things was to identify what I needed to learn, buy, understand, practice, then do it. More often than not I discovered that I got bored five minutes after paying for the expensive course, or buying that electric guitar. But I kept trying new things, often failing at them, despite having been burned (hoho) before. I was still young enough to believe I had no limitations, physical or mental, that could stop me. And I felt strangely secure in my knowledge that I wouldn’t be giving up or getting bored with forging.

I looked at available options. There weren’t many. The last Dutch blacksmithing school shut down twenty years later, replaced by a restaurant. There was a short course in the Netherlands, group classes stretched over two weekends. It cost approx. 1.5 kidneys – if I got a good price on eBay. A course in Poland, where I was born, was available to join every year. In July. It was December. I did not feel like waiting seven months, but I also couldn’t afford to – I would run out of money before then. So I did the only sensible thing – found out who the head of Polish Blacksmithing Guild was, called him, and convinced him over the phone that he should give me a private course. He named what he imagined was very high price. He had no clue what the prices in the Netherlands were. I accepted, and never regretted. 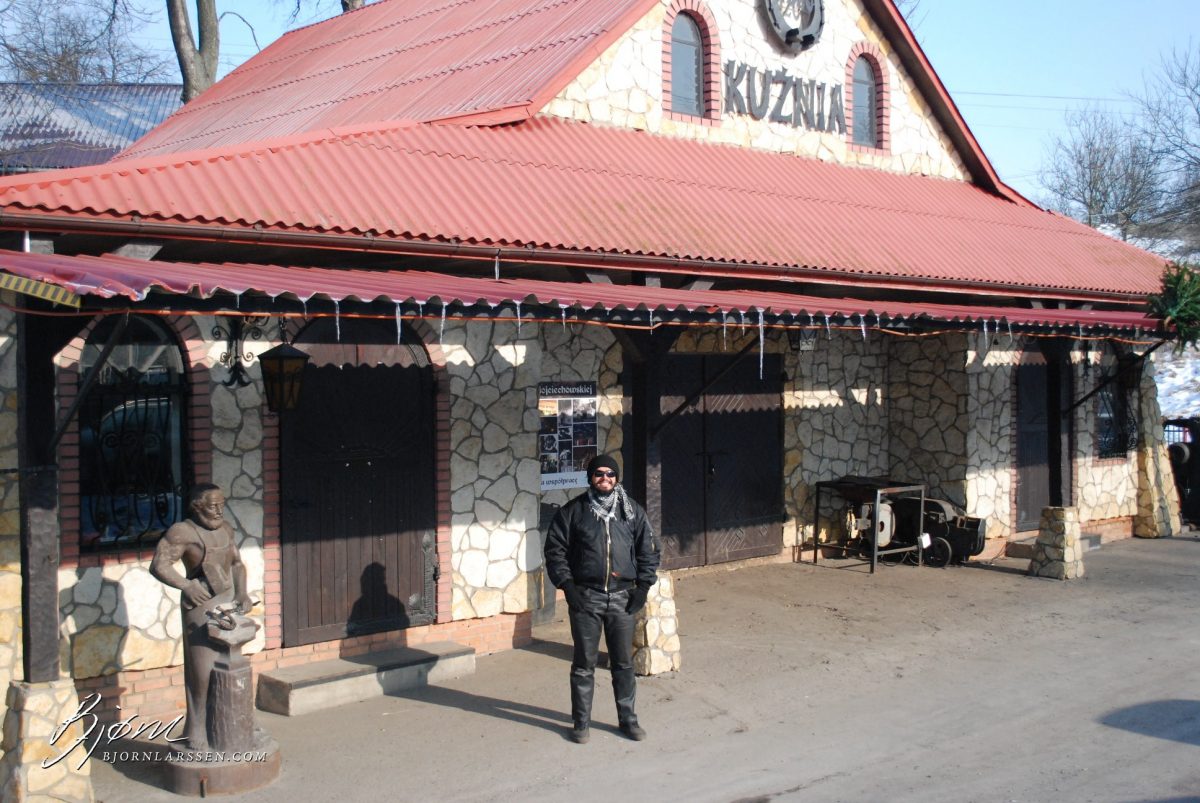 My private course lasted eight days, with a weekend inbetween. I mostly worked with his apprentice, who was a very cool bloke, and had enough time and patience to explain things to me – I was one of his assigned jobs. It couldn’t have been better. I was allowed to continue working when the forge was already officially closed. Nothing could stop me, including the weather. Before travelling I looked at the forecasts, and Accuweather (it’s never been particularly Accu, to be honest) told me to expect a low of -6 Celsius (21 Fahrenheit). The temperature duly dropped to -6, then continued until reaching -24 Celsius (-11 Fahrenheit). I worked wrapped in literally all clothes I brought… okay, not literally, as I couldn’t quite bring myself to put on all underwear I brought. Thermal longjohns, winter boots, sweater, multiple t-shirts, thick gloves, jacket, winter hat, scarf… I found that after a few hours of work I felt warm enough to take off the hat and scarf, and if I really put all my energy into it I sometimes managed without the jacket, too! 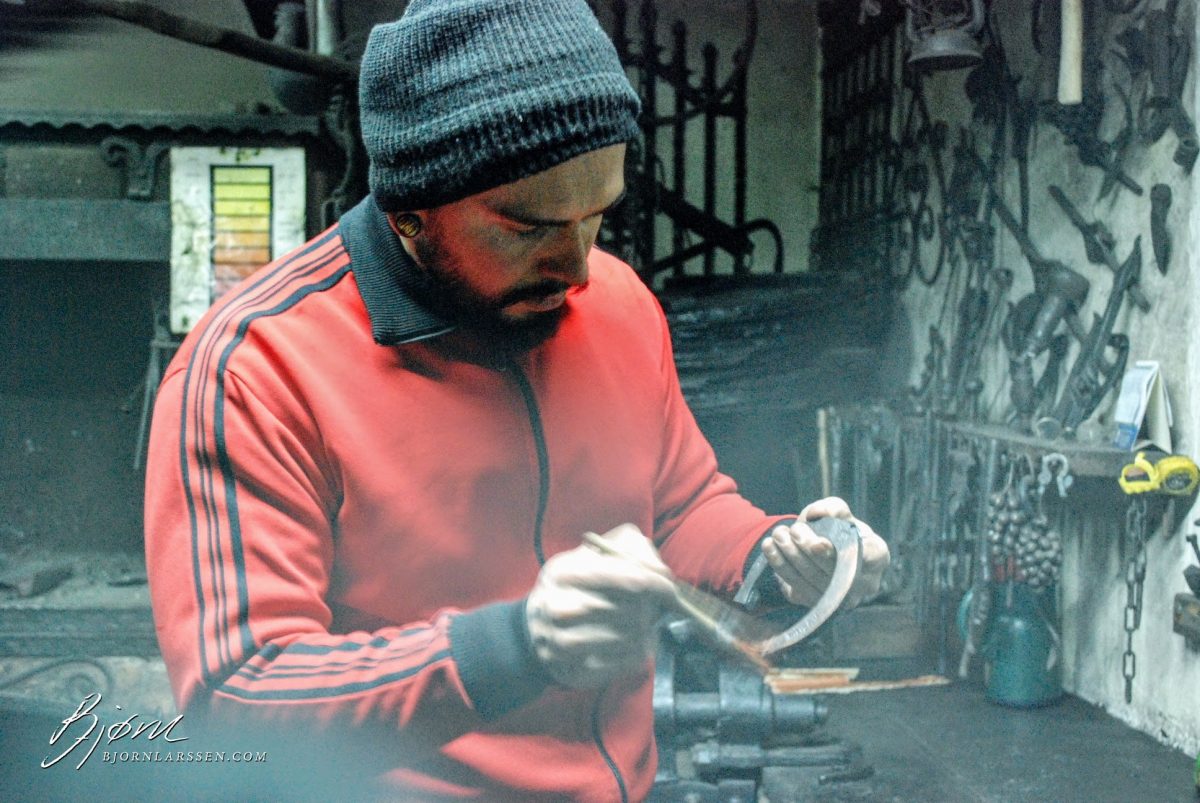 An illustration for a clichè that makes me grind my teeth: “gleaming horseshoe”. Horseshoes gleam in two situations. 1) When they’ve been used long enough (by a horse) for sand and rocks to “polish” the horseshoe. 2) When you used a grinder or a metal brush to polish them all purdy, then painted with special oil or lacquer to ensure no oxygen and humidity could reach the metal, as it would then rust. On this picture, I am painting the horseshoe with matte black paint.

Forges are, generally, not heated. Instead, they are very well ventilated. The fire requires lots of oxygen, but also produces toxic gases, not all of which are kind enough to escape through the air vent. As much as I love the smell of very hot iron, the forging process itself produces toxic fumes as well. Therefore no matter how low the temperature gets, as many windows as possible must be kept open. Most people think that a smithy must be a very hot place, and it often is – in the summer. On a cold day the fire heats up your hands really well, it’s also pretty good at making your face warm, but doesn’t warm up anything else. Especially feet… 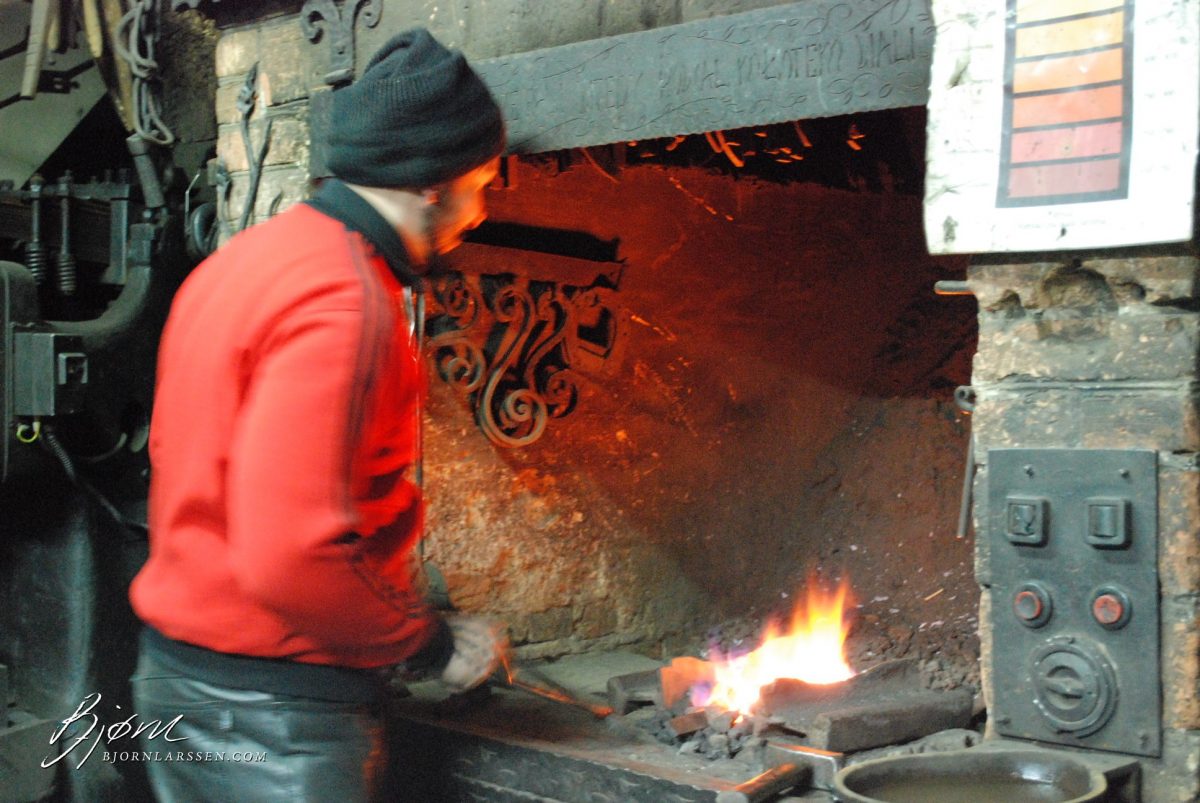 Mmm, warm face. The water bowl on the right was frozen every morning, and remained frozen until we put hot iron in it. 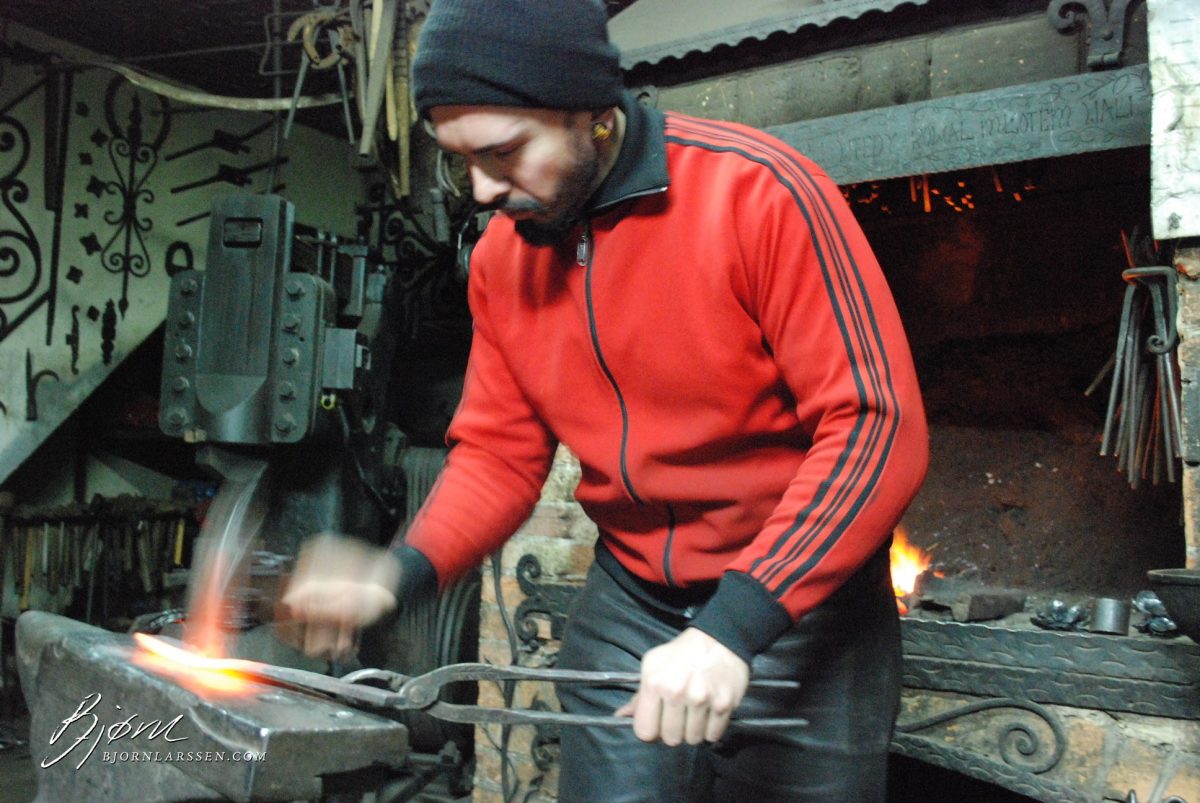 Mmm, warm… uh, nothing really, except the iron. (By the way, blademaking is mind-numbingly boring.)

The small water tank by the fire remained frozen until hot iron was placed on top. The water in the toilet bowl froze as well. And in the sewage pipes. In order to do a number two I had to return to the master smith’s house (TMI? sorry) where I was renting a room. It was all a bit scary, somewhat strange, very alien, absolutely amazing. It was heaven. (No, not the number two. All the rest.) 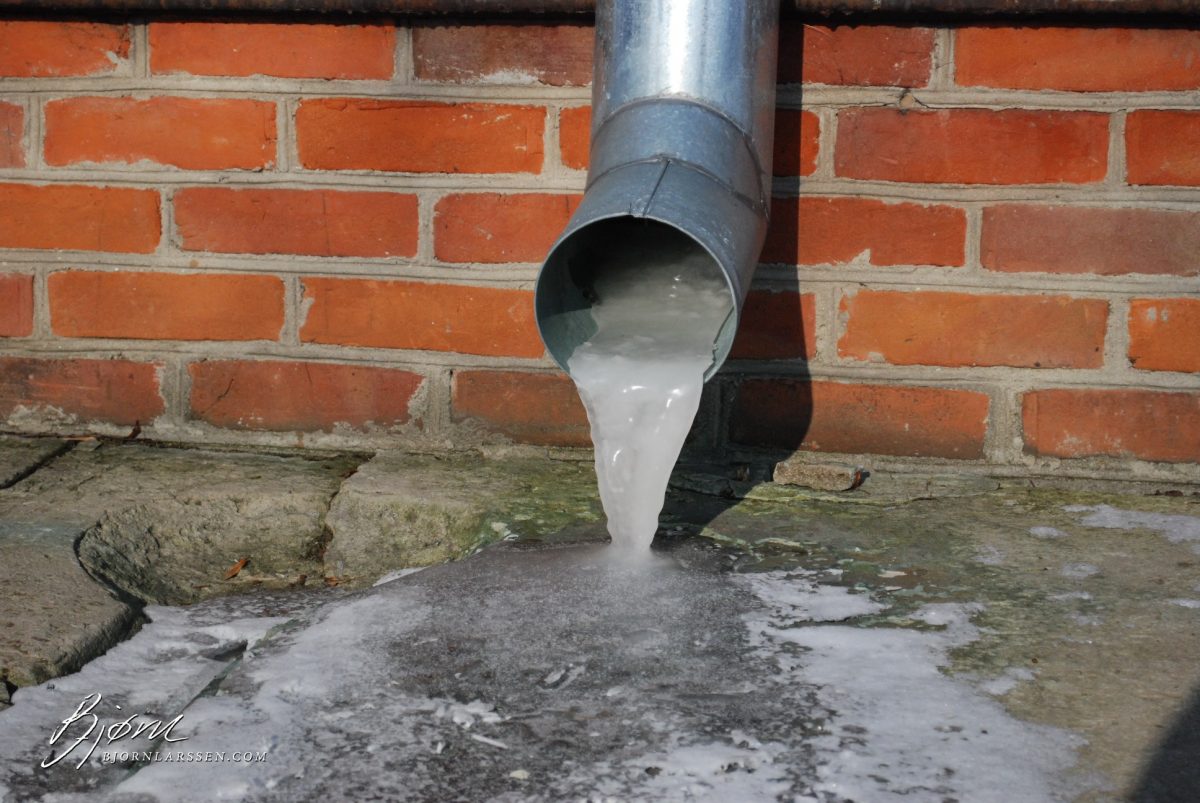 I hope you don’t mind me not putting up a photo of the toilet for historical accuracy.

Blacksmithing is a very easy job. You start by learning all the basic techniques (that’s what I did within those eight days). Then you practice them for a decade or two, and you’re ready to conquer the world. I found out how to shape the metal, cut it, decorate, upset, taper, split, twist (this was weirdly disappointing, because it felt too easy), add variously shaped rivets, sharpen, soften, bend, round… Armed with those abilities I now only needed to find a place to practice upon my return to Amsterdam, as I had a feeling that the neighbours wouldn’t be pleased if I built a forge on my patio. I loved making nails and horseshoes – the first year of forging was largely me being super excited about the fact I’m doing anything – but the most exciting part for me was making roses. 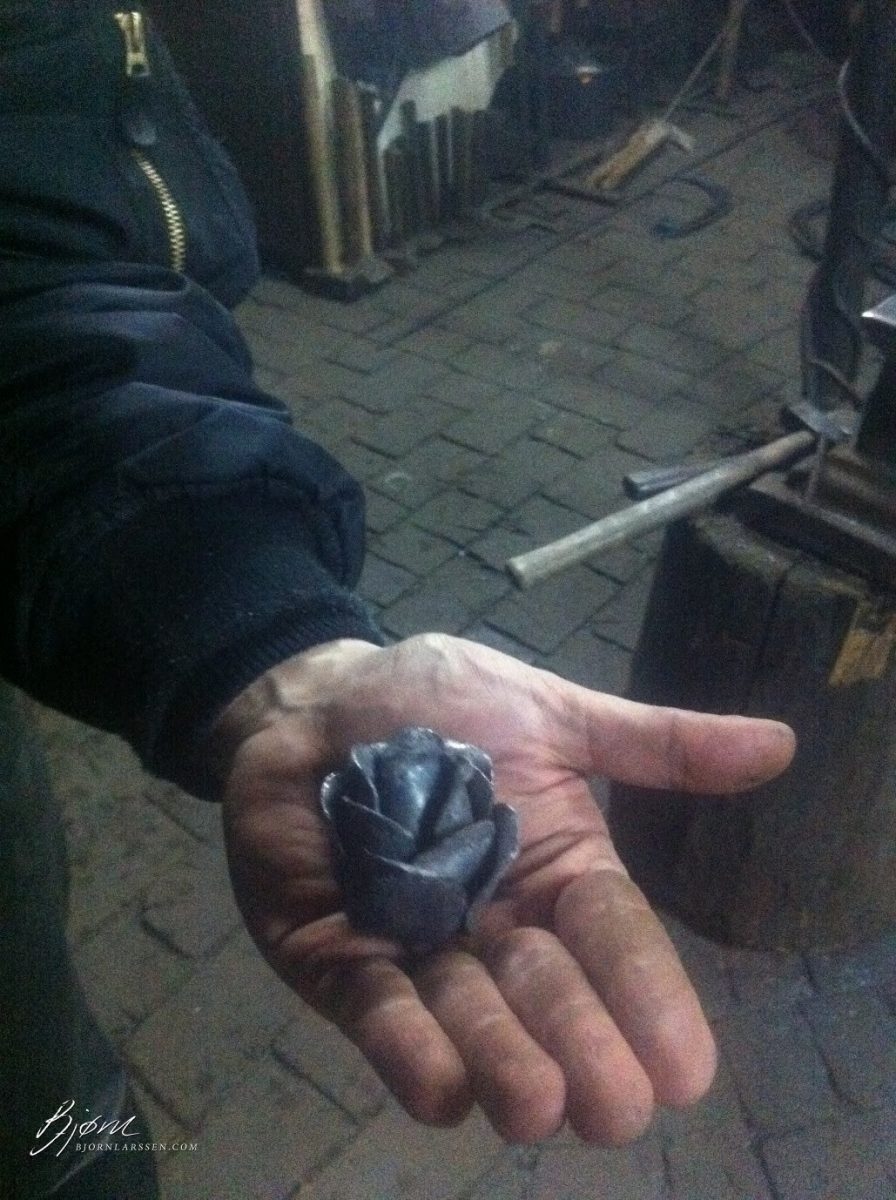 Started on a rose.

One of the first things I knew about blacksmithing was that it was possible to make iron plants. I didn’t care about swords (good – few things are more boring than that), or horseshoes. I wanted to make roses. Both the master smith and his apprentice were helpful and encouraging – the only part I didn’t get to do myself was electric welding. I told them what my real motive was, other than just wanting to create magic – a flower made of iron, and they were both glad to help me fulfil that wish.

My mom, upon finding out I now wanted to be a blacksmith, cried a bit. Then she said two things. “You had such a great job with a computer!” (which almost killed me) and “But you are way too gentle to do something like that!”. When I returned from the course I handed her the rose you see below. The foot has the words “For mom” and the date stamped on. “If there is something I want to do,” I said, “nothing is going to stop me”. I still firmly believed it was true, and mom believed me too. I thought – if you ever tell me there’s something I can’t do, I’ll tell you to look at the rose. But she never tried to undermine me again, nor did she ever attempt to tell me I was making a wrong choice. Since the day I gave it to her, the rose remained the centerpiece of her small collection of photos and family knick-knacks, proudly displayed in the living room, eternal. This was one of the reasons I wanted to work with metal: there is a good chance my entire family will die, and this rose will still look the same as it did the day I made it. 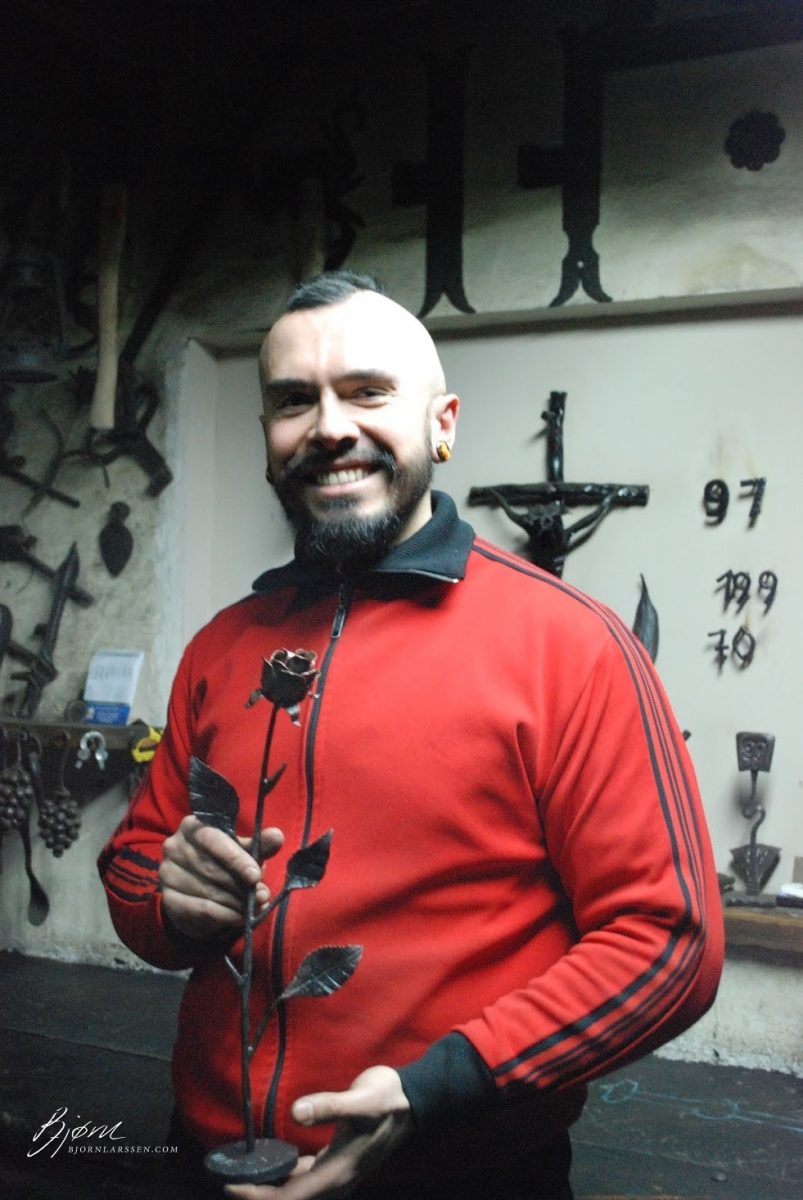 I’ve made horseshoes, nails, hinges, two roses, iron hearts, fireplace tools… and I’ve made my first sale. A family came by to visit – among other things, this forge was a tourist attraction – and wanted to buy something small as a little keepsake. The picked one of my nails, and asked about the price. The apprentice said nothing, pointing towards me. I had no clue how much a forged nail should cost. I named my price – around $1.50 – and got paid. I later framed those coins together with the diploma I received. The top photo plus the one below are selections from those eight days. (I have no clue what those sharpened chunks were for…) 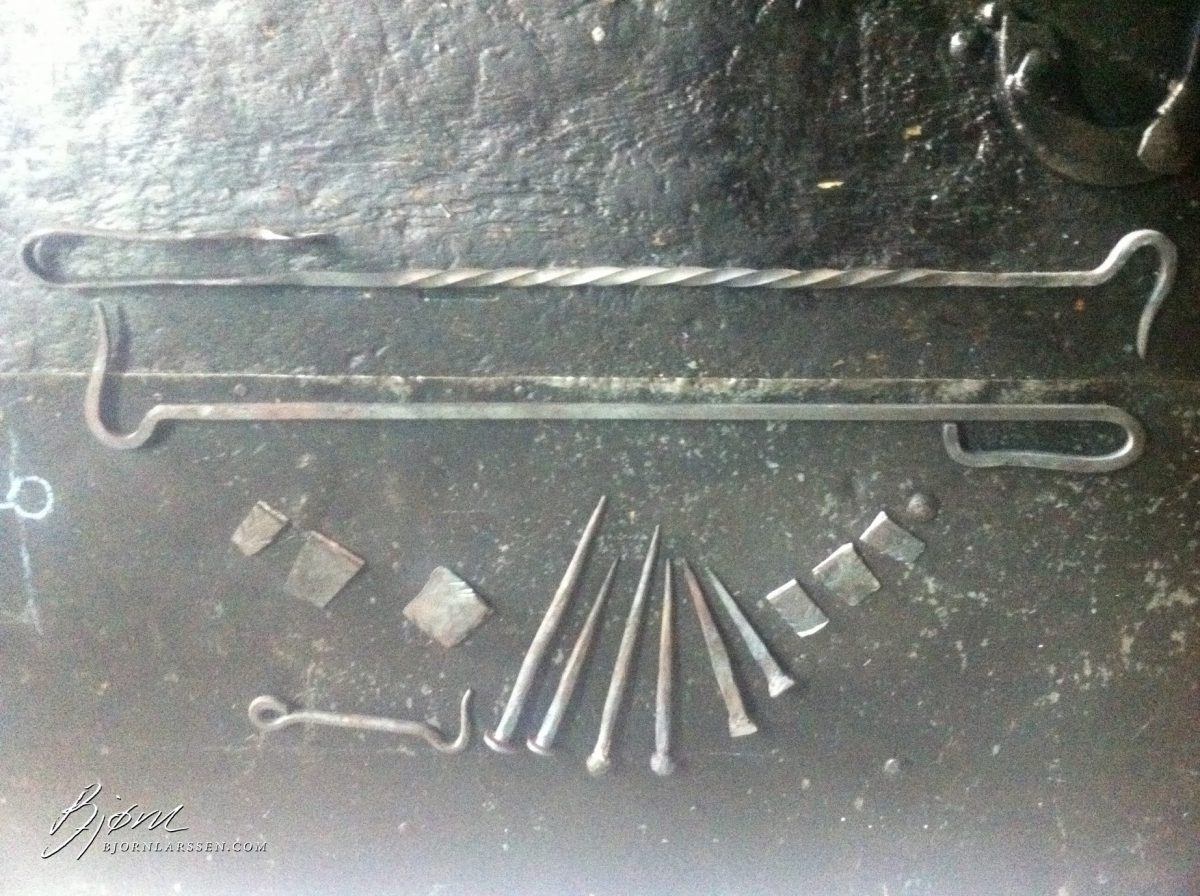 I ruined my iPhone camera by leaving the phone uncovered at the forge.
I learned my lesson, and never bought a non-dustproof phone since.

A few of my Polish friends came over to visit me, and stayed overnight. While at one point it did get somewhat warmer outside, our last morning was hell frozen over. We waited for a bus to town, then we waited some more, and then another hour… We ended up looking like this: 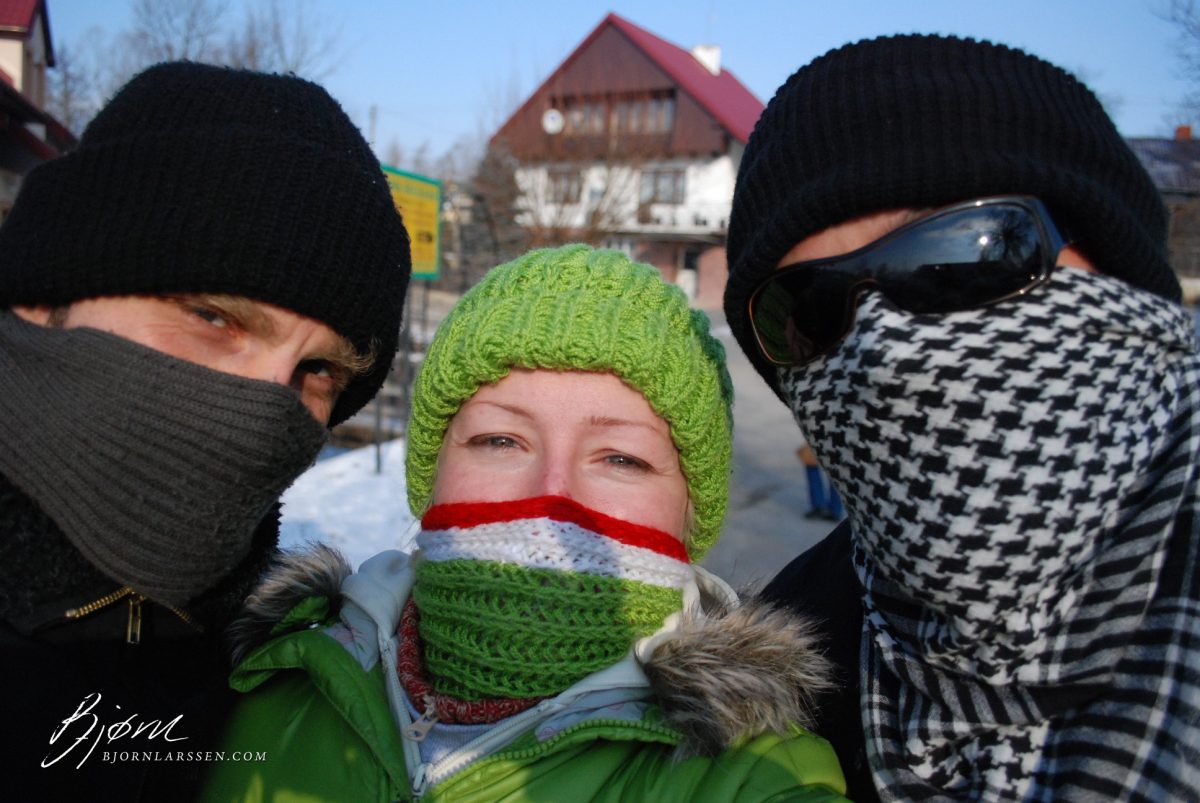 Artur, Cristi, yours truly. As you can easily tell, I’m the one on the right.

Now I just had to find a place to practice forging in Amsterdam, a small, densely populated, definitely non-industrial town. I knew it wouldn’t be a piece of cake. But I had unshakeable faith in what I was doing, and the Gods were on my side. I knew I would, again, get what I wanted, and I was right. I mean – I was an arrogant prick, of course. But I was right. There was no limit to the amount of time and work I was willing to put into it, or to the amount of burns I was willing to sustain. This was something I learned from mom, too. When working on something I either put 100% of my energy and resources into it, or stop. There was no way I would stop forging. It was just a matter of finding out how to continue. When I handed her that rose, she must have seen her own determination in my eyes. She might not have said it, but she, too, knew I would fight as long as necessary. I had a confirmation: this was it. There was no way I would have given up a dream I didn’t even know I had.