Guest Post: An Empire on the Edge of History Guest post by Marian L Thorpe, whose Empire’s Reckoning is out today. Purchase links at the end of the post. My completely non-objective score: 6/5.

Empire’s Reckoning is my 5th title and 4th full-length novel set in my fictional, alternate world, a world that bears a strong resemblance in many ways to northern Europe after the fall of Rome…and yet is not. Not in geography, or in all social constructs, or in its history. But it’s so close…

One of the most frequent comments in reviews of my work is that it reads like historical fiction, and I call it historical fiction of an alternate world (actually I’m fairly sure it was Bjørn who coined this phrase). But the reason that it reads like historical fiction is because it is solidly and thoroughly grounded in history, except when it isn’t. But because it has such a solid historical underpinning, the bits that are speculative inventions – like the society separated by gender for all but two weeks a year, and the resultant lack of heteronormative assumptions about sexuality and family structure– don’t seem, perhaps, so outlandish.

(Even that society has some underpinning in history, based in loose terms on the social structure of Sparta, although my society has no slaves, and marriage per se does not exist. The begetting of children is another matter!)

What I’m supposed to be writing about here is how I integrate real history into my fictional world, and this is a bit like when people ask me to write about world-building, because the two are inextricably linked – and the real answer is I don’t know. I don’t do it consciously. But I can analyze the history integration better than I can the world-building. Part of the answer is simply this: I’m 62 years old, I’ve been reading history since I was about 6, and I just have a head full of information that magically tumbles out when I need it. I also have an ability to make odd connections – think laterally, I think is the proper term. 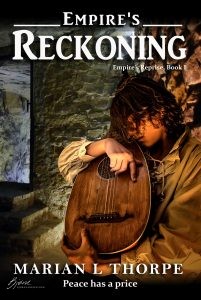 Somewhere in my teens, my father, an amateur historian of the Tudor and Plantagenet eras, imparted an important lesson to me: history is most interesting when we look at its effect on common people. Social history, not just political history. (My main character Lena echoes this: “Not so long ago, really; a year, or less, Cillian and I talked of finding the voices of common people in history. He suggested perhaps the danta (sagas) were the best place to look.”) I set out to write a story about how political developments – warfare, treaties, alliances – affected one young woman from a small fishing village. I also wanted to explore issues of social justice in a  speculative way. I needed a framework for that story, and I didn’t want it in any historically well-documented period. So I put it in what has been known as the ‘dark ages’, the early-medieval period after Rome’s empire shrunk and when learning and intellectual discourse were once thought to be lost.

After that, well, it was a matter of using recognizable aspects of late-Roman and early-medieval Europe: the division of Britain by Hadrian’s Wall; the Viking expansion; the Justinianic plague; the Battle of Maldon…a dozen more…and weaving them together to create a political stage to inform and drive the choices my characters have to make: personal choices about loyalty and ethics, love and betrayal that both reflect and contrast the choices being made at a larger level in their world. I thought about what personal conflicts my characters needed to face, and then borrowed bits and pieces of history to create those conflicts.

Then, well, I needed languages. I like words, the look of them as well as the sound. So I ‘invented’ a few languages – not whole languages, just words here and there – and on the page they look like the languages they’re mirroring: Linrathan looks like Gaelic; Marái’sta looks like Norse; Casilan looks like Latin. Sometimes the words are genuinely in those languages, but most often they’re derivative, like my word scáeli, meaning bard: it looks like skald, it looks like the Irish scéalaí, (storyteller), but it’s made up. But because it looks right, it strengthens the connection to the world I’m reflecting.

I would be remiss if I didn’t also mention the writer who has been most influential in teaching me to use history this way: the Canadian historic fantasy writer Guy Gavriel Kay, whose books I have read over and over, absorbing how he brings the recognizable known into his world: a world just slightly twisted on its axis, a world with two moons, and a little magic, but still, almost, Europe.

Apparently, this all works, at least in many readers’ minds. When the bookblogger Joules Barham described my books as set in “an Empire on the edge of history”, the phrase resonated immediately. That’s what I write.

Photo credit: Temple of Hercules is by MarkV, licensed under the Creative CommonsAttribution-Share Alike 3.0 Unported license. Empire’s Reckoning is out now. Amazon: https://relinks.me/B086SFY7WB – all other retailers: https://books2read.com/u/4AzV90