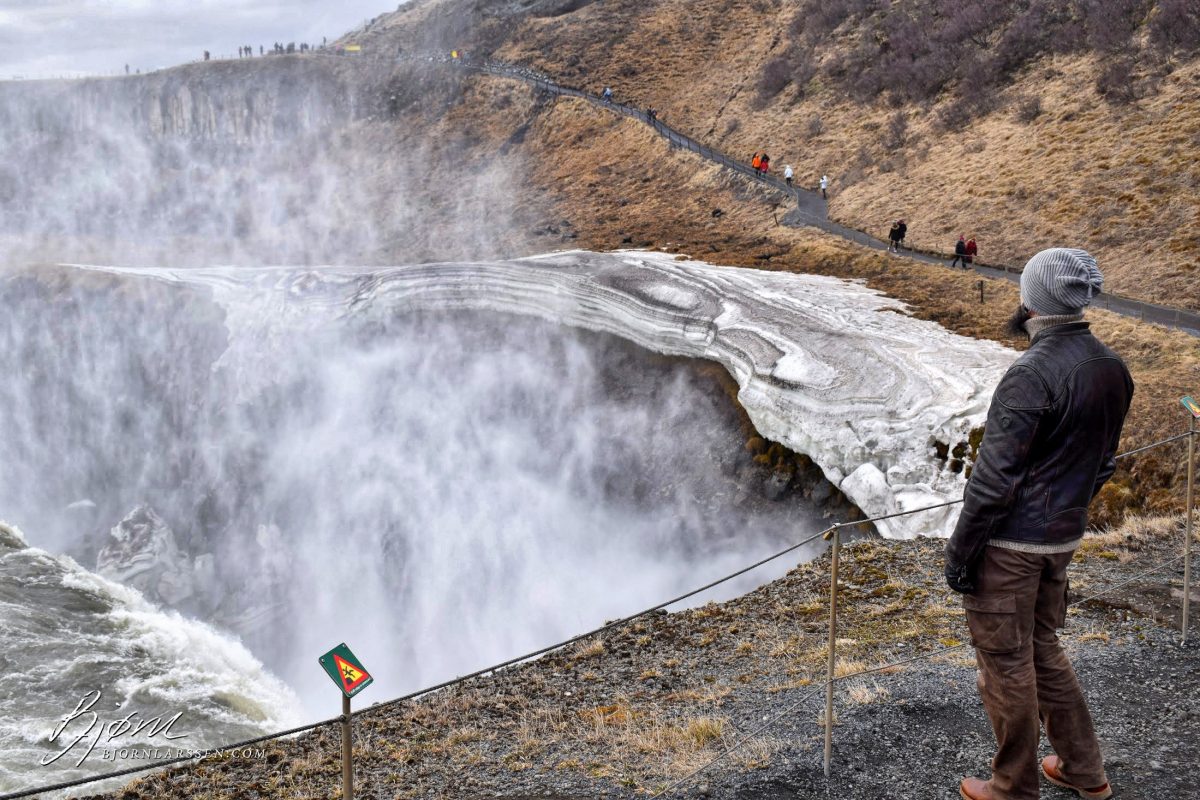 The first waterfall we encountered was accidental. We went to Guðrúnarlaug, and as we were bathing in the hot tub, Husby pointed something out. 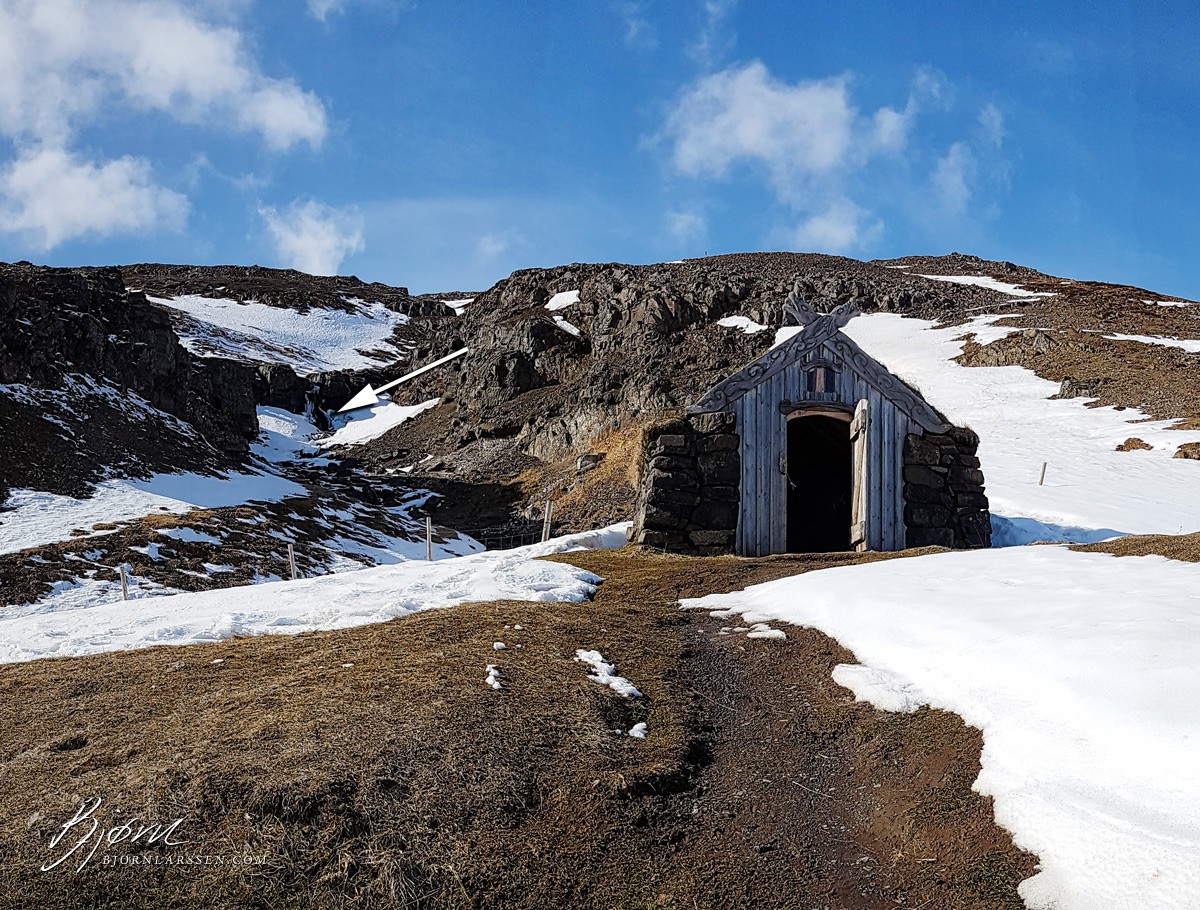 We had no idea if this six-year-old sized beauty had a name, but it was just a bonus to being able to be completely alone, bathing in a hot tub surrounded by snow. It gave us something to listen to.

The second one you have already seen – it was a little bonus that came with our trip to Snæfellsnes. Because why not? Iceland is generous like that. This one has a name: Bjarnarfoss. 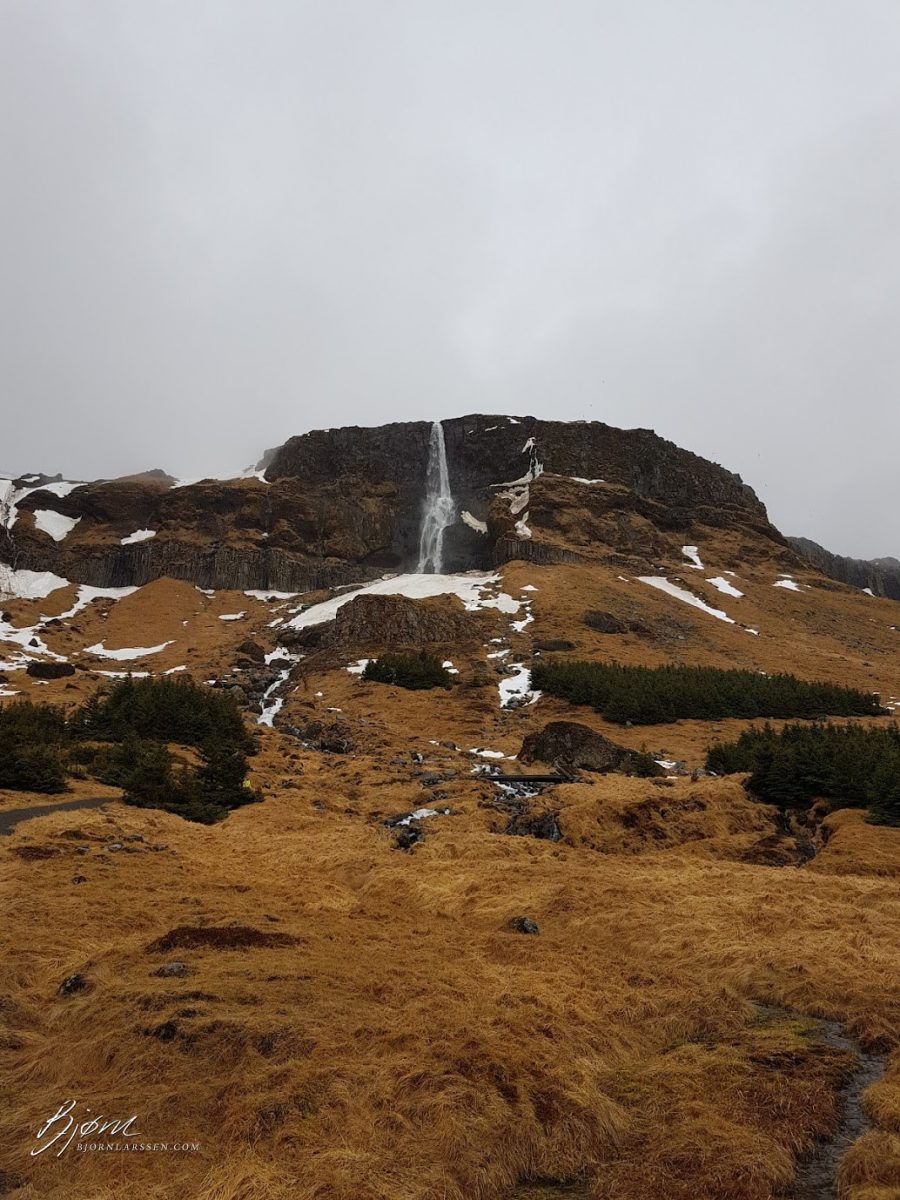 But why settle for two when you can have four and are greedy AF?

I am all scientific and shit, researchy and hermity (and authorsy and writersy). But there were touristic places even I had to visit. When we came here last year, we’ve walked through a large chunk of Þingvellir, but didn’t quite get to the end of one of the paths. This year I found what was at the end of that path, and it just so happened to be a waterfall: Öxarárfoss. 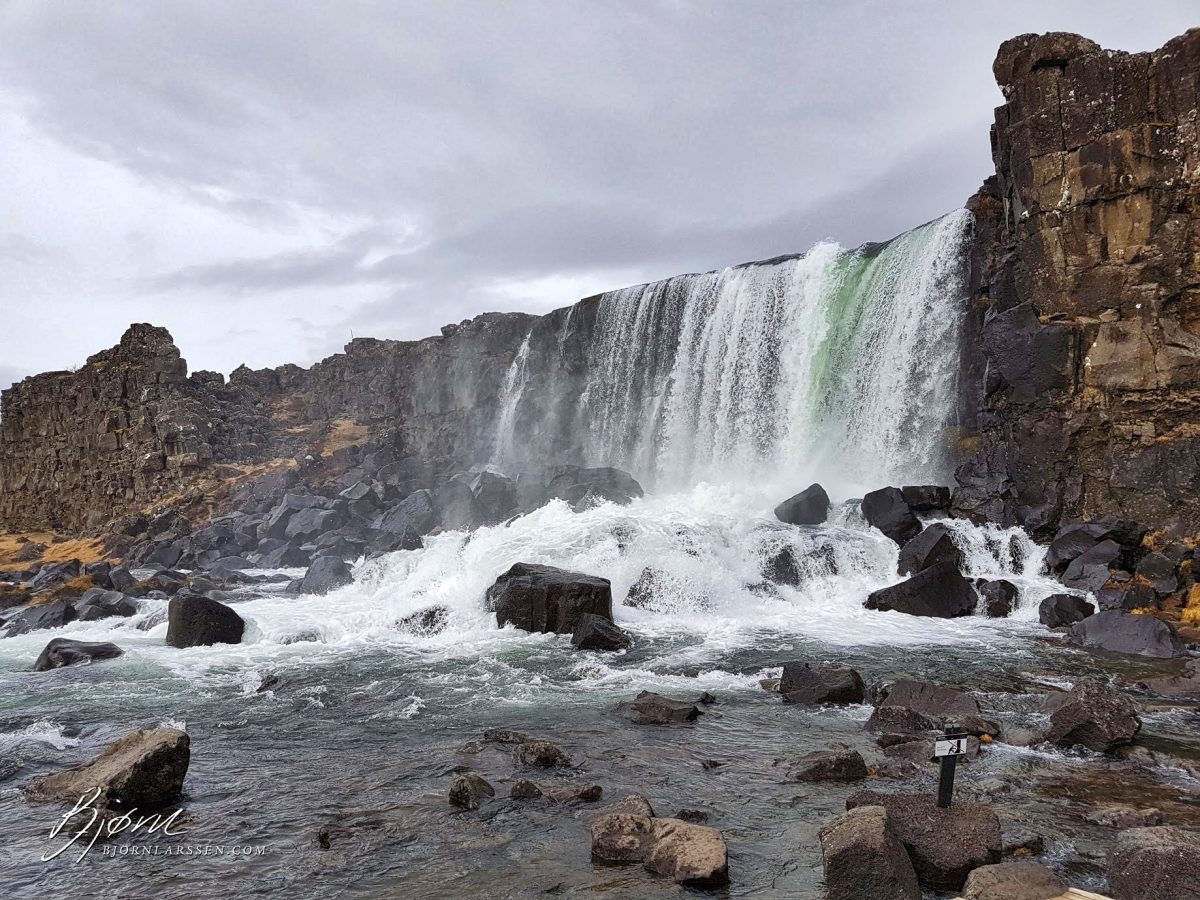 In order to get there, we had to walk through a path made largely of snow, ice, and black ice. Very little sunshine and warmth gets that deep between the rock walls. (As you might know, Þingvellir served to film The Wall for Game of Thrones series. It really is that size.) By the way, the green water really was green, and I didn’t know why, but all I wanted was to sit there and be. And I got my wish. We got there early, ehmm… for our standards, and were lucky enough to avoid most tourists. 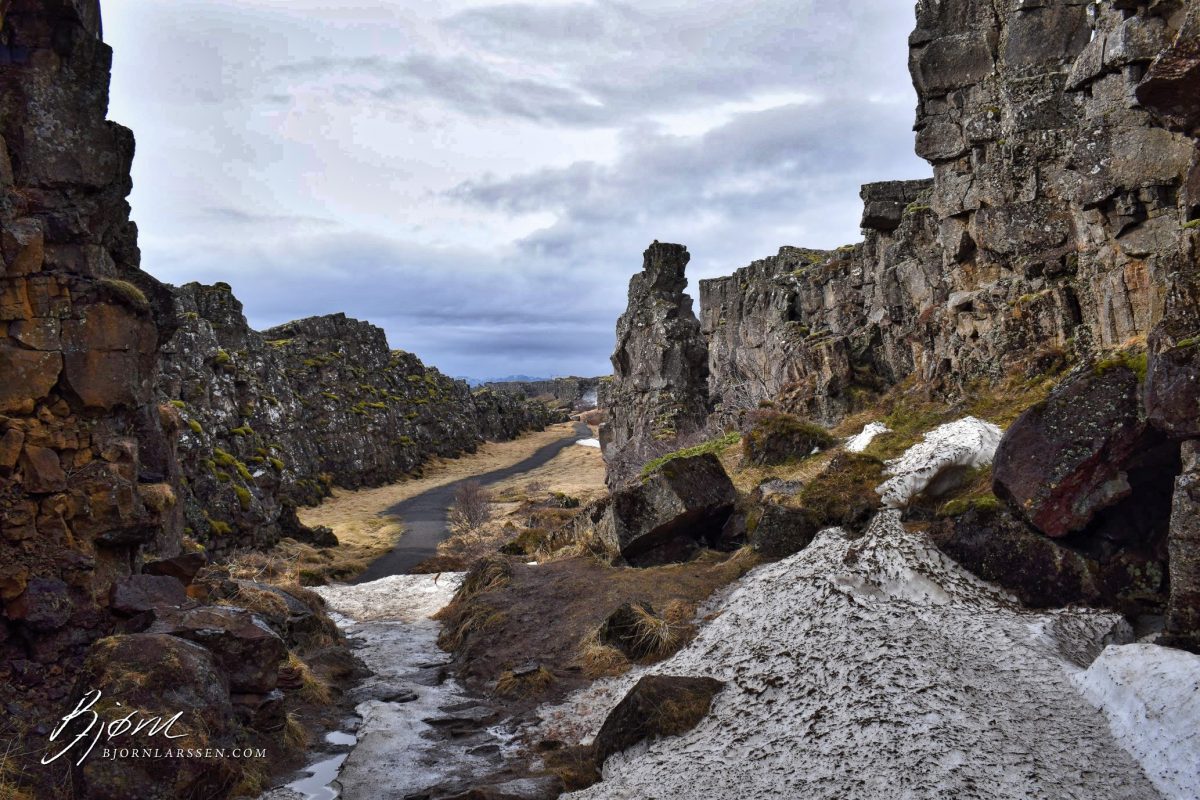 This is the end part of the path, and I mostly took this photo to prove we survived.

On our way back to the car we found out how lucky we were to go early, because we bumped into the content (i.e. tourists) of two buses. I helped an old lady not to fall on one of the icy rocks, and she smiled, and so did I. But then we had to stop, because we encountered two girls…

(I barely resisted the urge to say “that’s fine, humans die quite fast without food and water”.)

If they could speak in emojis, they would. But finally they managed to balance themselves a meter further, thus allowing everyone else to move at least a bit. And this was when I realised I was a bloody hypocrite. Because Karen and Janet were tourists, but so were we. We paid to be in Iceland, but so did Karen and Janet (and when you know the prices of those tourist trips, I bet you they paid much, much more). It is not illegal to act like a twatwaffle just because you are surrounded by a place that is holy to many people. It is not illegal to squee and be drunk, offensive, obnoxious in front of statues, waterfalls, or mountains. But I didn’t want Karen, Janet, and all other people to be there. I wanted to be able to sit in front of Öxarárfoss and listen to nothing but its roar. This is not how tourism works. (I have a certain idea what I’m going to do next time, though. It’s based on the fact that in the summer it never gets dark in Iceland.)

Iceland is currently so popular, their unemployment rate is 2.2%. Anything below 4% is generally considered people who don’t want to work for various reasons (not: can’t, but don’t want). In other words, Iceland has practically minus unemployment. This is caused by the amounts of tourists. The repairs of the roads, the attempts to create public transport more refined than a bus network in Reykjavik – all for the tourists. But the tourists also damage the country. They yell “Kareeeeen!!!” in it. And the fact that I am judging them like the Harry Potter hat doesn’t change the fact that they kept the economy not just afloat, but booming in the recent years.

When we went to Gullfoss I expected the worst, people-wise. But most of the people, even kids, kept quiet. Although there was a chance they were yelling. I was busy. Because Gullfoss is enormous, and it sounds the way it looks. 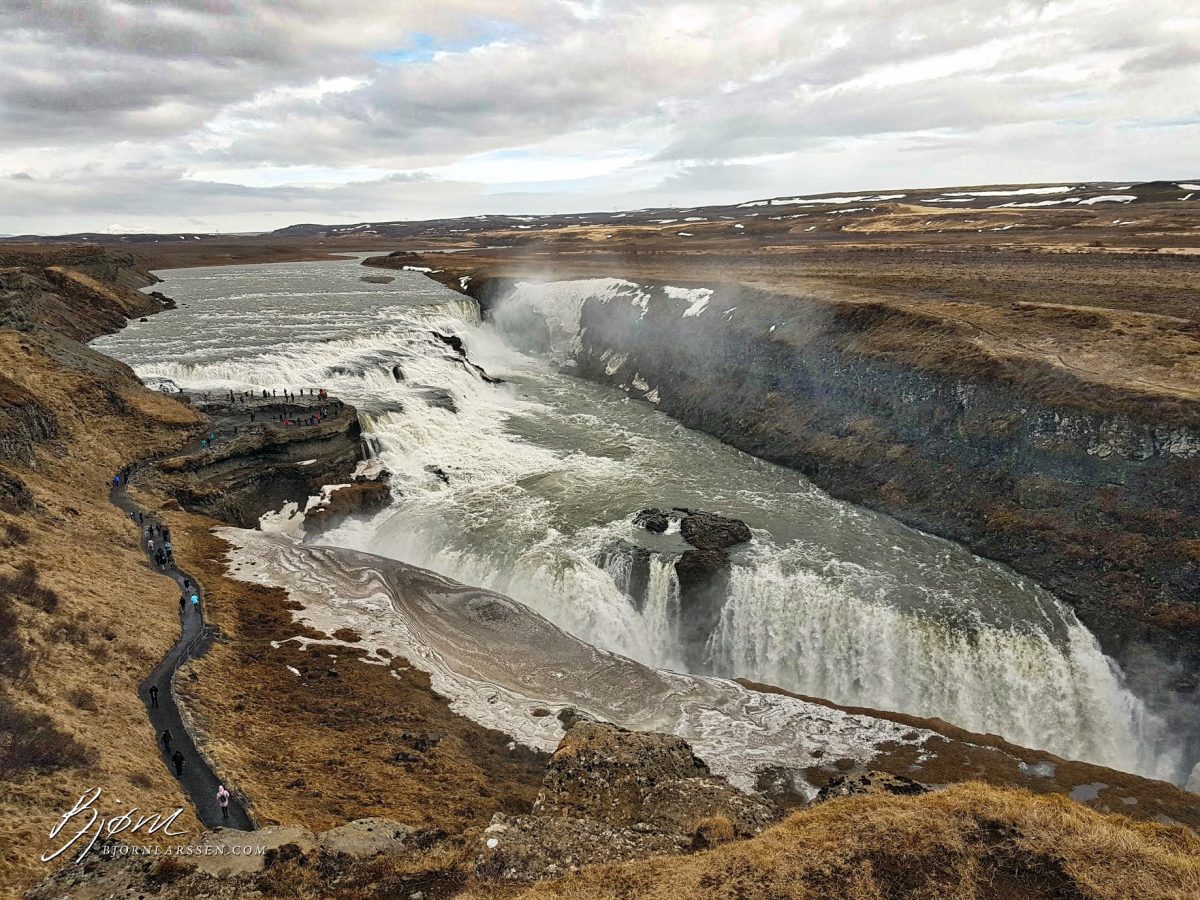 This is probably the most touristic place we’ve seen. This photo might not look so impressive. But look on the left. That’s the road. Then look at the blue dot. That’s a full-sized human person.

Gullfoss has an official site, which states:

The water plummets down 32 meters in two stages into a rugged canyon which walls reach up to 70 meters in height.

I can absolutely believe that. Although at some point I lost the ability to say how tall the canyon was. It was just…gigantic.

One of the things that draw me to Iceland so much is that the nature doesn’t give a shit about you. You’re just a bit of it. In so many places (I live in Amsterdam, enough said) the nature seems to have been conquered, at least until a hurricane starts tearing trees out of the ground, throwing them at cars, killing people. Not so in Iceland. This waterfall’s safety measures again extended to miserable rope hanging a few inches over the ground. If you want to die, the waterfall seemed to say, suit yourself. Just don’t expect me to care.

Can you believe in 1907 there was serious danger that this incredible, terrible beauty would have been turned into a power plant by an English businessman? Read more here, but I would like to thank Sigriður for almost single-handedly ensuring that this wouldn’t happen. A sculpture of her likeness can be seen at the entrance, and Sigriður fits the place.

I left with enormous respect. For Sigriður, for force of nature, for the fact that all those places just…exist. And when we dispose of mankind by pressing Larger Red Buttons That Actually Work, or just drown in emojis, Gullfoss will still be there, roaring, impatient, angry, and not interested in any of us, whether it’s Karen, Janet, Chad, Husby, or me.