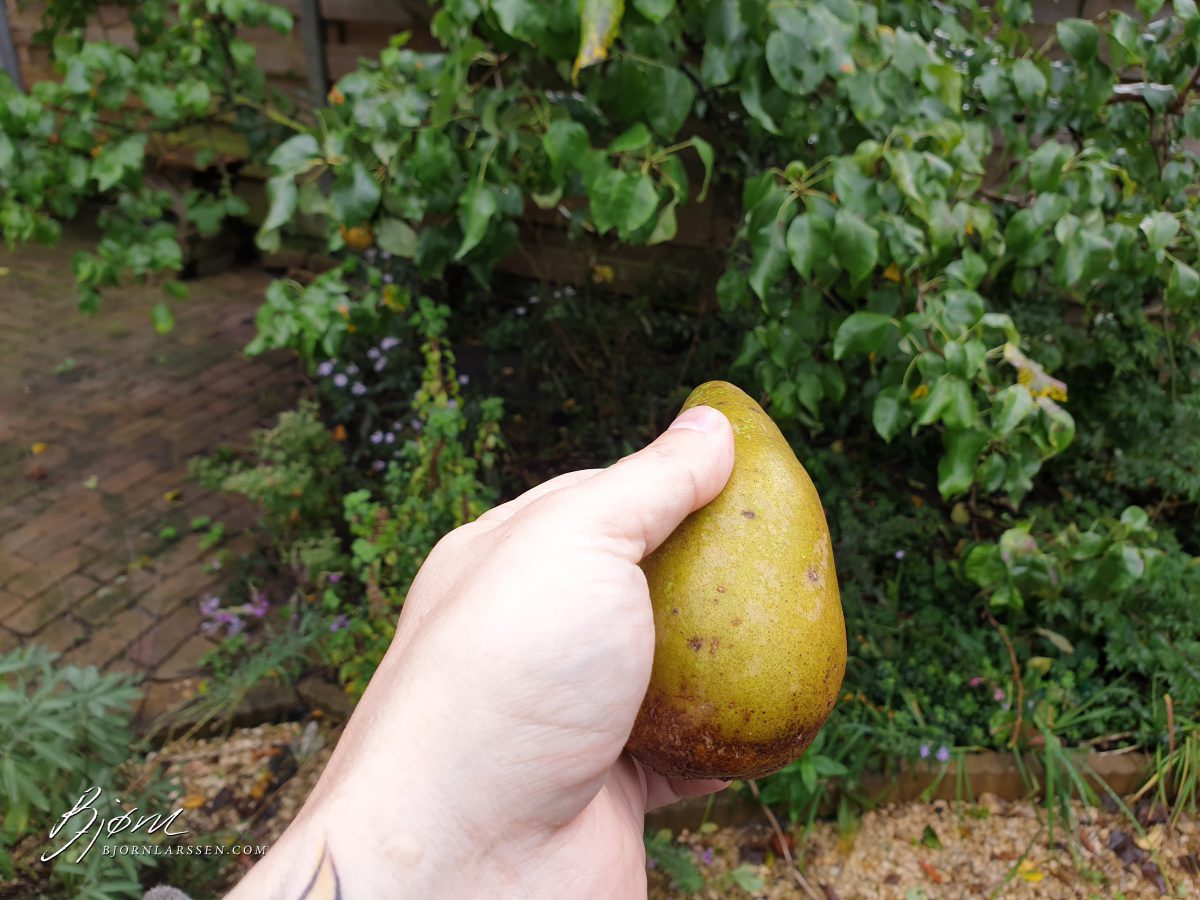 I was on my own, Husby back in Amsterdam. I had a specific craving: I really, really wanted to eat some fruit. We had nothing at home but frozen plums and the chance of me going to a grocery store of any sort was non-existent. I remained glued to the sofa, my gaze fixated on nothing in particular, just a random point in space, when sudden movement caught my eye.

A pear fell from the tree. Right there, in front of my eyes, exactly where I was staring. I was almost surprised that it didn’t fall in slow motion, so unreal it seemed.

A minute or two later I was holding the fruit. The pear didn’t look like the ones you get at stores. Not just because it was dirty and not wrapped in plastic, but it was also sort of wrong colour and looked like there could have been some extra animal life included for free. I cleaned it with reverence like a jewel that it was, then with slightly shaky hands cut it to check – nope, no worms. I took a bite and it tasted like magic and like happiness and like strength and like serenity, but mostly like a gift that Mother Nature gave me just because She felt like it. Good Gods, I forgot that pears could have had so much taste.

I couldn’t help but think that this moment of magic was the real reward for the twenty-one months. Months that I had spent escaping into reading, writing, meditation, wearing both earplugs and noise-cancelling headphones and still hearing the noise from the outside, or just lying down and waiting for the day to end – over and over again. It wasn’t the moment we signed papers, or even the moment we got the keys on my birthday. It was this one pear. I ate it very slowly, unable to believe it even as I was savouring the taste so intense I could almost hear it. (The main photo is a different pear, by the way, but from the same tree. It’s a generous tree.)

We own a magical place that makes food, I texted to Husby. Perhaps that was a bit too much of a mental shortcut, as his reply seemed a bit concerned, so I elaborated a bit. The pear wasn’t magical enough to “fix” me, so I returned to my melancholic staring, but now there was a golden streak of hope. In Allie Brosh’s immortal words… 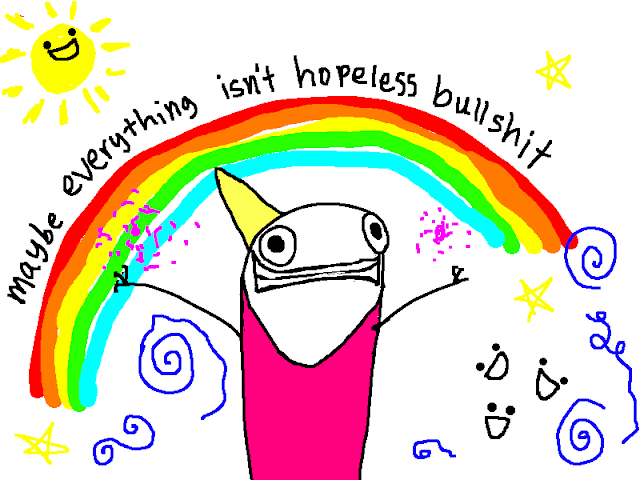 (Allie permits non-commercial use of images from her blog.)

I had to go back to Amsterdam for a day and it went exactly like I expected.

As I have (frequently) mentioned, we used to live on top of a bar. On my way from the ferry, which on a Wednesday evening was filled with more people than a supermarket here in our village at peak time, I passed by the bar’s only customer. It was a man of indeterminate  age, kind of half-hanging from a chair, a cigarette in his mouth. I pretended not to see him – it’s almost embarrassing at how good I became at not seeing the bar’s patrons (or owner) in the previous few years – and went inside. I switched the heating on, marvelled over how weird our old place looked now that there was nothing in it, then realised I needed some groceries. In total, I spent maybe two minutes inside. When I opened the door of the building again, I saw a puddle of soapy water under my feet. I just scowled and stepped over it. I knew what happened. The bar’s patron either vomited or pissed on our doorstep, but for once the bar owner noticed immediately and cleaned – sort of – up. (In the past he told us it wasn’t his problem and we had to clean it ourselves. Then he found out how good we were at being passive-aggressive and calling the authorities exactly one minute past midnight to complain about the noise and dirt.)

I came back, stepped over the puddle again, then stretched myself on the old sofa, the only piece of furniture left. In the morning I woke up, confused as to where I was – no furniture, no lamps, no carpet, no curtains, no husband will do that to you. I promised to paint the kitchen, pushing aside the knowledge that I wouldn’t actually be able to do it. I had nothing resembling suitable clothing, therefore I ended up painting dressed in nothing but my underwear, which is a very good summary of my life. I could only hope that the neighbours would enjoy the view. 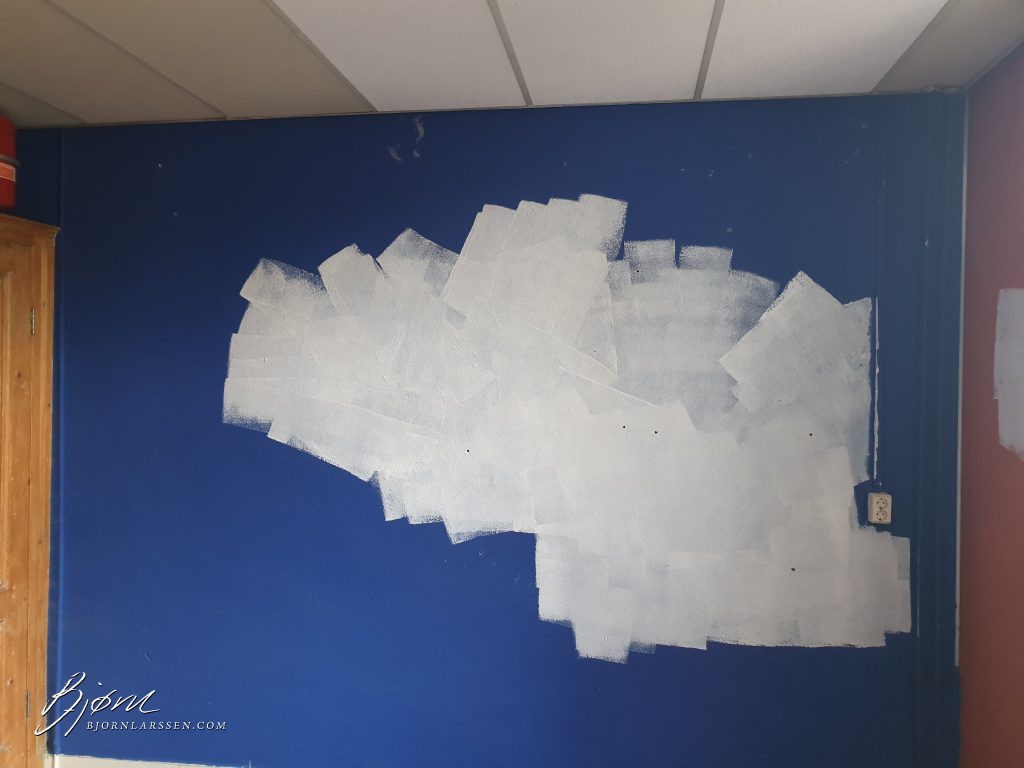 No, you DON’T get to see me performing this artistic, eh, performance!

After two or three hours I discovered that one day off and a night on the old sofa were not enough rest. I bent to dip the roller in paint, stood back up… and… nothing happened. (This is called “executive dysfunction”.) I stood like this for a minute or two, the paint dripping, then gave up. It took me a few hours to get dressed again and get back to the train station.

I came back home to the giant pile of boxes, or rather piles, as all of the rooms were more or less full. So was the shed. And the other shed. Once we found the chairs, we now had multiple pieces of furniture, which was practically luxurious. The place was an awful mess. I dropped my bag, then dropped on the sofa – again. I looked at the pear tree – again. And I felt the tension in my shoulders melting away. 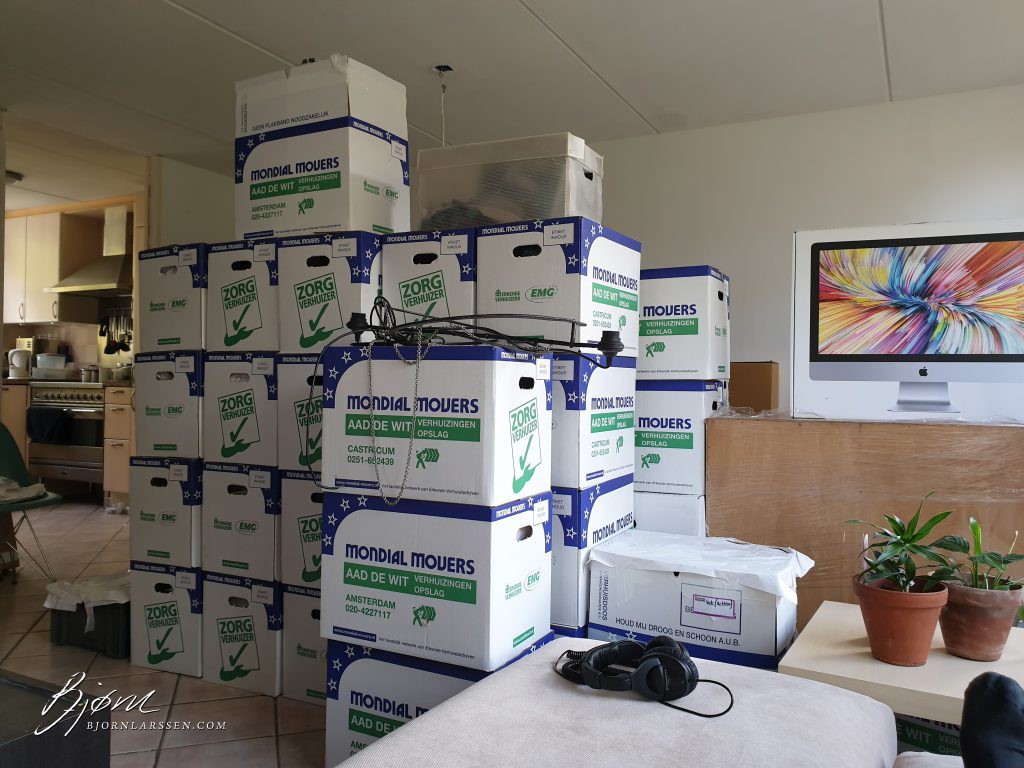 NOT the pear tree

I was aware of how difficult it was for me in those last two years to simply just live in that part of Amsterdam, deal with the fact that our doorstep was either pissed or vomited on, that there were occasional fist fights happening right outside our living room window – they were few and far between, but there were no advance warnings, meaning that I never felt safe when I was going out of the house or coming back in the evenings. Sometimes something would explode (literally). Once during a fight someone had thrown somebody else at our door so hard the lock had broken. Once we discovered that all of a sudden a good chunk of our street has been blocked by police and border control, then one of the many bars was closed as they seized substantial amounts of drugs. The street turned from something that hardly had an address into a great racing track for shouty youths on scooters – and I became old enough to say things like “shouty youths on scooters”.

It’s not like the village we now live in consists solely of silent retreats, yoga studios, and people who pass notes to each other rather than talk. It’s that when I leave the house I feel physically safe. Our neighbour with her chihuahuas… this is not supposed to be a double entendre… is much less terrifying than six drunken guys shouting at each other when I am trying to force myself to somehow not be afraid to push past them to buy milk. Here in the most boring part of a boring village we sit in the garden by a fire, looking into the stars, whispering to each other, yet still hearing what we’re saying.

Even the visitor breaking and entering didn’t scare me…

On Saturday night I had my own party. Husby went to work. The weather in the evening was on the “maybe-it-will-rain-and-maybe-it-will-not” side of things. I put on my boots and biker jacket, took a chair, a drink, and an oil lamp outside. I sat there doing nothing and being happy and at peace, because this is how I roll on Saturday nights, baby. Then, all of a sudden, I heard an unmistakeable sound of someone pushing through the bushes. He wasn’t even trying to keep it quiet. I stiffened. Someone broke into our garden and the most dangerous weapon I had was an empty glass. Paralysed, I waited for my impending death.

The intruder seemed… undecided, though. It sounded as if he got stuck in that one bush. There was no swearing, though, just very loud noises of a seemingly mute person in– hold on– the person got out from– it was– it was a hedgehog.

I’ve always been a city boy. I saw a hedgehog in the real life once, the poor thing was terrified, we were a group of people, and we could mostly confirm that they’re kinda spiky. This one, huffing, puffing, pushing through the bushes, came to visit me. I had no delusions, knowing that he (she? it?) came for the cat food we left on the ground. So what? I watched the spikey visitor as it approached, brave and/or hungry enough to let me come closer with the lamp. I didn’t mind the fact that judging by the noises we just lost half of our plants.

We live in a magical place with hedgehogs in it, I texted. I was so excited I was breathing in little sharp pants, trying not to scare the hedgehog off. Then Husby responded, my phone made a sound, and the little beast bolted away.

The local cat comes over to eat the food during the day. The hedgehog comes at night. There are frogs in the pond, at least two.

PS. This morning I found myself smiling at a spider.

PS2. As for the bumblebee, I squealed and let Husby take care of it. There are limits.