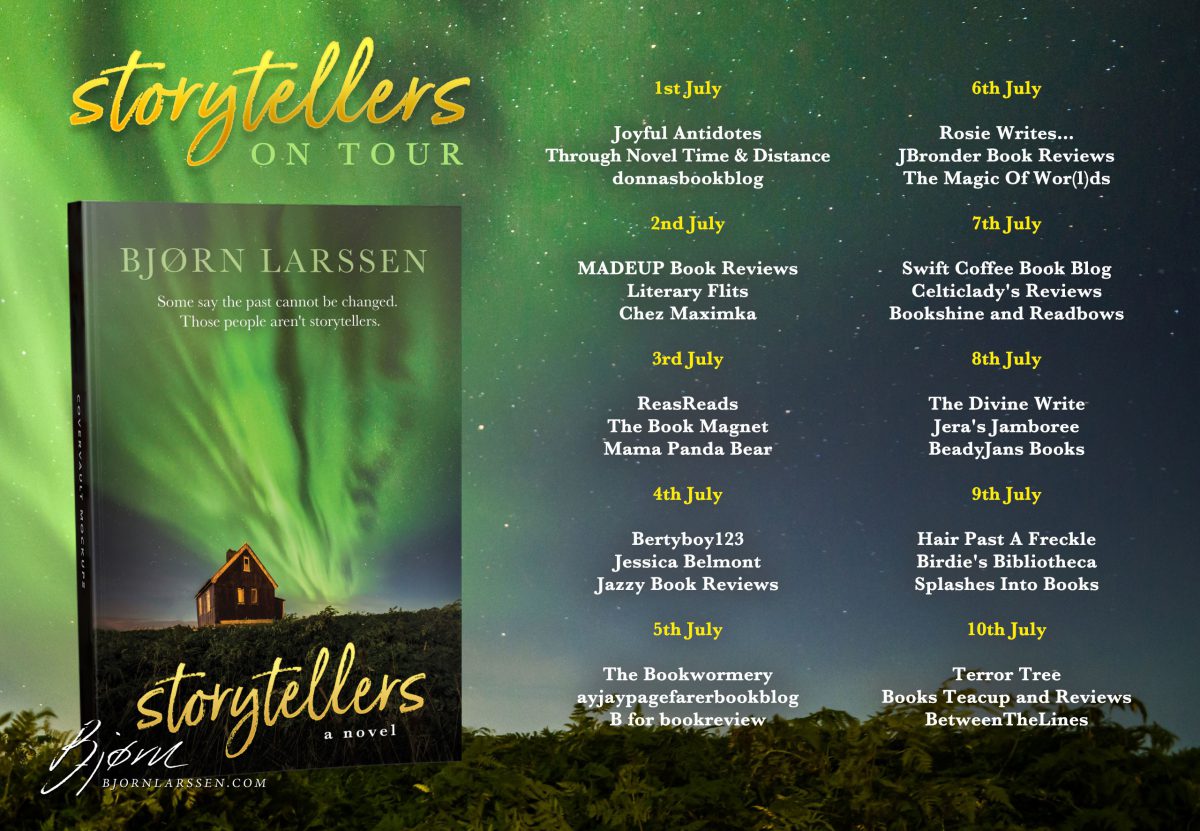 Tomorrow is the first day of the Storytellers blog tour, which means that for ten days, every day, three book bloggers will be posting their reviews and or excerpts from the book, interviews, plus two guest posts written by yours truly. The goal of a tour is to increase the visibility both of my book’s and me (the downside of being a new writer is that few people are aware of my existence) – and the bloggers’ work. Which means tweeting, retweeting, facebooking, refacebooking, standing on the nearest corner with a megaphone and so on.

I happen to be friends with a book blogger. (No disclaimer needed, since she has not reviewed my book.) Since we started chatting I found out how much work and time is really needed to maintain a book blog. Some of them are group efforts, like Rosie Amber’s Rosie’s Book Review Team, but most are the work of one person. A person who is expected to read, review, read, review, read, review regularly, no matter what life is up to. I have no idea what reviews Storytellers will get, good or bad, long or short, but I am already thankful to everybody who agreed to read my book, then write about it. In the last three weeks I managed to read 17% of Angela Boord’s Fortune’s Fool which is a wonderful book, but I just wasn’t really in a reading mood. A book blogger can’t just “not be in a reading mood” once a blog tour is planned and advertised.

Aaaaanyway, there I was, doing a nice flexy-flexy, stretchy-stretchy of my specially dedicated Share Button Finger, when all of a sudden life started to happen all over the place. Do you know this feeling when you discover one little problem? Really little, like a buzzing fly. Then another one arrives. And another, at which point you start getting a tad grumpy. Then one more, and another one…

I had a minor surgery planned for July 29. A few days ago the hospital called to postpone it. I was not extremely polite, pointing out that September 6 will mark the second anniversary of the first botched attempt (this is going to be either the third or fourth “final touch”, I seriously lost count) and that things were getting worse (this is why you haven’t had any video newsletters from me recently). As a result I got an appointment on July 1. It wasn’t until the day after that it dawned on me that the person who called used the word “appointment”, not “surgery”. I tweeted about a surprise plastic surgery, but now it’s double surprise, because until tomorrow at 10:20am I will not know whether I am getting surgicated or not.

This is slightly stressful.

A lot of indie writers (if you are interested, here’s a fantastic article on differences between self-publishing writers, indies, and authorpreneurs) manage to write and publish a book every 2-3 months. I am not one of them. At least not yet. Perhaps when I get better at what I do. For now, I decided that the second book is goodish enough to show it to beta readers. I gave myself a deadline of July 1. I didn’t know that weather would do what it’s doing and that I would react to it the way I did (and still do).

At first I spent a week of June boiling in Warsaw. Then we came back here and I got sick from temperature drop. Etc. (See the last post on climate catastrophe.) Yesterday Amsterdam was subjected to a twelve-hour heatwave, with the temperature rapidly going up until about 6pm, then dropping even faster. My impostor syndrome tried to force me to work until June 30 at 23:59, but at some point it died of overheating. I exported the file, sent it to the betas, then spent some time breathing and waiting for the evening. Today I am sick again. I have no clue why my body is doing this, but I have a suspicion it has to do with being old. I do not recommend getting older. 0/10, wouldn’t buy again. Getting older was the biggest mistake of my life!

There is a silver lining, though. 1) I am officially done with that draft, which means I can take a longer break from it without feeling like I’m a lazy buggletwit. 2) In case my surprise surgery does happen tomorrow it’s going to heal faster, because from today on the temperature is supposed to remain lower.

This type of surgery lasts about five minutes. It is followed by the recovery process which lasts between three weeks and a year. (I wish I were kidding.) In any case I shouldn’t spend much time staring at any type of screens in the next days. At the exact time when I need to be on social media all day. If I were doing it just to promote myself I’d probably just shrug helplessly and go “it is what it is”. But the bloggers who gave me their time and space on their blogs also need the exposure I can provide – they show my book to their readers, I show their blogs to my followers. Disappearing tomorrow would be an asshole move from my side. Not disappearing might be stupid and dangerous to my recovery from the surgery.

I don’t even know whether I am allowed to argh.

But why talk about future when I have the present happening already and by “present” I don’t mean a gift?

Thank u for ur input x pic.twitter.com/jqSQfOzWNR

On Thursday morning Husby made a lovely smoothie for breakfast and that was the last time half of our house had electricity. Half. Kitchen, hallway, bathroom, and the right side of my mancave are currently powerless. The rest works as it’s supposed to. All fuses are fine. There was no BOOM or even TSSS or a spark. The electricity just…disappeared.

Husby called an electrician who arrived, took a look at everything, scratched his head, then announced that it was a job for The Team and left. The Team will visit us on Tuesday between clownhouse o’clock and lunch o’clock. Until then we’re forced to jump over a very long extension cable stretched between the living room and the kitchen to keep the fridge and freezer working. Showers in the candlelight are not half as romantic as taking a bath in the candlelight, especially since we don’t have good spots for candles. I gave up on my attempts to put on contact lenses, because as it happens all the mirrors in the house are either in the bathroom, or the kitchen, or the hallway – the dark side of the house. I am typing this in my mancave, where the electricity is present in one socket. Which, due to us having ran out of extension cables, means that I can either charge the laptop OR have Internet.

It transpires that it’s worse to be half-powerless than completely powerless, because if we had no power left at all we’d be a priority case. As things are now we currently make coffee in Husby’s studio, toast the bread in the living room (I just realised I’m living in a Cluedo game), and use either the washing machine OR the dishwasher OR hot water. This is going to become hilarious right after everything gets fixed.

Taking some time off

I definitely need some time off. How do I know that this is the time to take that time? Because I got depressed for the first time (I’ll stop now) in a few months.

I’ve written once about why the most regularly repeated advice for writers doesn’t really apply to people with recurring depression. Right now all I want to do is curl up and stay in bed for a few weeks. Ideally until September or until the Icelandic Ministry of Culture invites me to stay in Iceland for a year or decade as a writer-in-residence. This is unfortunate, but the problem with depression is that I can’t plan it in advance to avoid it colliding with my appointments.

So it would be really nice if you could please not want anything from me, because I have about 13 hours TO BE RELAXED AARGGHHH RELAX RELAX before my possible surprise surgery AND RELAX I WILL. IT IS A PLAN. ALL MY PLANS GO WELL. Today is the relaxation day and I’m chanting as I’m typing this. I am not online. I am not writing. As evidenced by me posting on the blog!

I felt bizarrely guilty for not relaxing productively (??) today and then came across this cartoon by @rubyetc – I’ll be on the sofa indefinitely pic.twitter.com/VE06jRRLLA

At least I’m really tired, so I know I will definitely sleep well.

going back over old things and I think this is the realest of the many drawings about insomnia that I have done. pic.twitter.com/27vMfqgx4f

This is where I should come up with a witty one-liner to round things up, but since I don’t have one please follow @rubyetc on Twatter, then buy her book here. Or the other way round. Either way you win.