Óðinn, the god of many things, including death and transition, was also known as Jólnir or Jölföðr, which means Father Yule or should we just come right out and say it: Santa Claus. He and his wife, Frigg, had a son named Baldr.

Frigg, the goddess of wisdom, blamed herself for her son’s death. She had been so worried about his demise that she travelled far and wide, making all living things take an oath on to keep her son safe. On her travels, she passed a mistletoe. It was so tiny and insignificant it couldn’t possibly be of any concern. She continued on her way without paying it any more attention.

This would lead to her son’s demise. Loki convinced Hörðr, who was Baldr’s blind brother, to throw a dart of mistletoe at him, killing him. Some will say it was Hotherus who killed him with his sword named Mistlsteinn.

December 20th, the night before the Winter Solstice, was the first night of Yule or Mother Night (Módraniht), marking the birth of a new year. This evening was to honor Frigg.

Óðinn was getting ready for a great journey. To prepare his 8-legged horse, Sleipnir, children filled their boots with hay and sugar and left it out for him to eat.

On Yule, Baldr returned from the realm of Hel. It was also the night of the gods’ Wild Hunt with Óðinn and Sleipnir in the fore. His hunting team consisted of other gods, dead warriors, baying hounds and all kinds of dead creatures. It was best not to cross their path; they were fierce and dangerous.

Never during the year are we as close to death as on this day, the settlers believed.

The winter was at its darkest, thinning the veil between worlds, allowing the souls of all things dead to roam free among men.

December, 22nd, the third Yule night and the birth of the new year. The goddess Sunna (Sun) returns, breaking the winter spell. This is also the time to honor the god Máni (moon). A log is burned as a symbol of Sunna’s fire to speed up her arrival. It was to burn continuously during the longest night of the year. The ever-burning fire showed that life could last even in the darkest of times. The ashes were spared and used later to ward off evil spirits. The log was also spared and used again the following year.

As a part of the celebration, an animal sacrifice ritual called blót was to take place. The farmers sliced the throat of a dead animal and let the blood flow into a sacred bowl. They then sprinkled the others with the blood and smeared the god figures upon the altar with the blood. Blót also means to strengthen. Taking part in blót was to give more power to the gods and the elves.

Although Óðinn is Father Yule, Þór is the god of thunder and the god of agriculture, which was a vital part of sustaining life. In a way, he was their safe keeper.

Humans were terrified of the Frost Giants who terrorized them during winter times. Thankfully they had Þór who defeated them, making it possible for spring to begin, so they could till the earth.

Freyr, the god of good harvest and peace was married to the Frost Giant, Gerðr. Thanks to their love, the ice and snow melted making room for summer.

During this time, the thinning of the veil allowed the dead spirits to return to their earthly homes. Their living relatives left out food for them to eat, such as fresh baked bread and something to drink.

It was important to respect and give thanks to the elves as well. The farmers would prepare Elf bonfires (álfabrennur). It was one of the few days in the year when the elves made themselves visible to humans. The Elf king and queen rode from farm to farm visiting all the bonfires prepared on their behalf.

The farmers also left out food for the huldufolk (elves). Then on New Year‘s Eve, when it was time for them to move on, the farmers left out candles to guide them on their way. 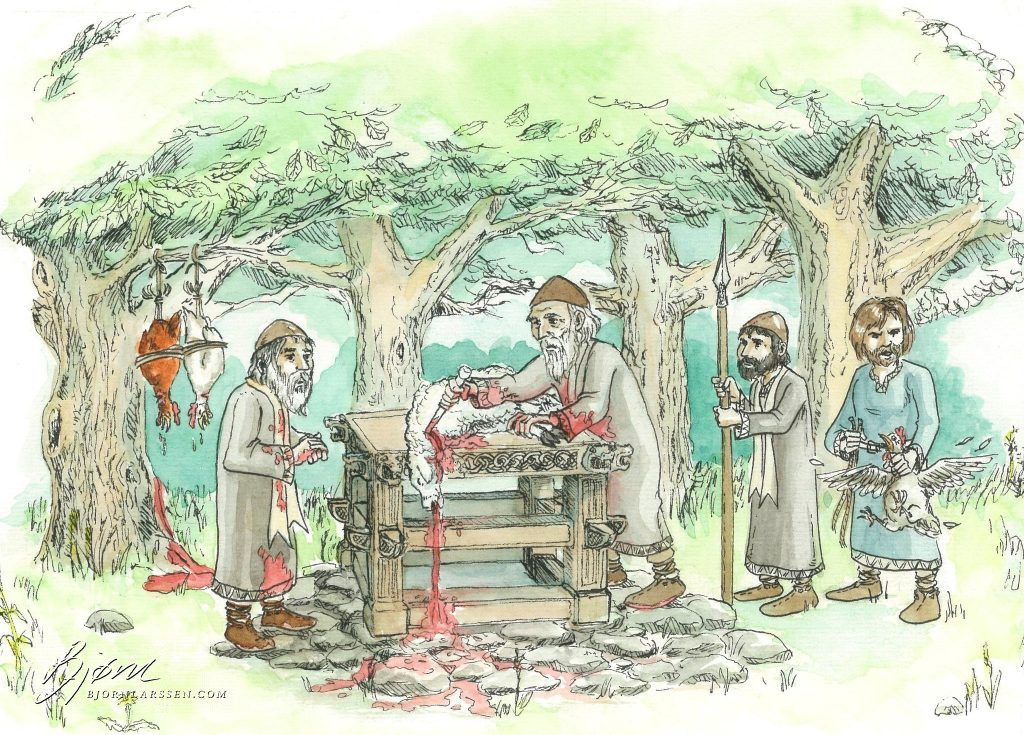 Yule is the season where the gods and goddesses skirt the edges of Midgard (earth).

It is the season where the dead return to be among the living and all the magical creatures roam around freely.

Whether it is in the spirit of the pagans, the religious or the traditions that remain today, the message is still the same: Love and prosperity. No matter what the story, it was to bring our attention to that which is important to us, so we can be reminded of what makes life good (and perhaps what makes life not so good). It is to make sure that we spend our time and energy on the true values of life. It is to be generous and make peace with our friends and our enemies.

Again, the message is quite clear: Love and prosper.