Remember to be unaware of autism between 1 May and 31 March!

Some activists are trying to change the narrative to “autism acceptance month.” I can’t say I disagree, because yes, I am “aware” of autism. I am also aware of rabid dogs, my allergy to orange peel, and of the slugs in our garden. I’d argue, however, that “autism,” as in the word itself, is already widely accepted. Autistic people, not so much.

Among many other fun things, about which I’ll write some other time, autism is a communication disorder.

Autism is: being told “you should have asked questions if you didn’t understand” by people who routinely get mad when you ask questions and never believe that you don’t understand. https://t.co/tsBQT413wA

#ActuallyAutistic people are only acceptable to most neurotypicals (NTs) when our lives are either a motivational “success” story or a tragedy.

Autism is accepted when it’s either undetectable or crippling

We don’t understand and we don’t know what we’ve done or what you mean. When we ask questions, we do so to learn how to make you more comfortable. We adapt our behaviour and reshape ourselves based on this feedback. This costs us a lot of energy and destroys our sense of self. If you don’t tell us what you want us to be, we won’t know. We won’t earn the “you don’t look autistic” prize. (I told Husby that the next time we hear this he should say “Bjørn, please perform An Autism for the lady.”)

I replied “don’t forget ‘you know exactly what I mean'” to Colin’s tweet, and he came back with “also, ‘you know exactly what you’ve done’.” I jokingly said he’s been reading my diary that I don’t even write. He responded that we all have one collective diary, to save time. He’s right. Neurotypicals are predictable in their lack of empathy and consideration for our feelings.

And yes, I know that by saying this I’m making some people uncomfortable, which means I lack empathy and I have no consideration for their feelings. (This was sarcasm.)

When autism is truly disabling – making it impossible for the person to function in neurotypical world unassisted (this can mean a lot of different things I’m not going to go into) it is also acceptable. It is the “real autism” that Autism $peak$ promises to cure, as it leeches money off parents and caretakers. It’s such a tragedy that those people completely can’t mask.

Masking are all the things we do not to make neurotypicals (NTs) uncomfortable by being who we really are. (“Showing our true colours!”) We’re not supposed to ask (“don’t pretend you’re stupid!”). When we guess incorrectly, NTs won’t tell us, because that would be rude. There are also the booby traps: rigid rules, which are always 100% correct and need to be enforced, unless they aren’t, and if we wanted to have friends we shouldn’t have followed them. (This is interesting to hear from a policeman.)

Masking uses a lot of energy. The eye contact, to pick a stereotypical example. A lot of autistic people find it very difficult to maintain eye contact, therefore they’re perceived as dishonest and false. I used to keep eye contact all the time, which, as someone eventually told me, gave me the gaze of a “charismatic sect leader.” Then I learned that this creeps NTs out and the right amount of eye contact is 80% of the time.

Since then whenever I’m talking to someone, I have a little voice going on in the back of my head: remember to look away 20% of the time. But… when? For how long? What do NTs look at during the 20%? Floor? Objects? Stare randomly into space? I actually asked my therapist, who, bewildered, said that she’d never thought about it. “That sounds absolutely exhausting,” she added. It is. I have to keep the other person comfortable, though, no matter how much it costs me, or this might prove to be our last conversation.

In related news, people who feel the need to announce publicly that autistics have no empathy should perhaps ask themselves if it’s an empathetic thing to say.

The problem is that some NTs lie to us, but we don’t know which ones, when, why, and about what. Various autistic people deal with this in various ways. Some simply stopped giving a fuck and allow themselves to be themselves. (They tend to have few friends.) I don’t accept myself, so I keep trying to learn and adapt. When someone keeps lying to me to feel smug about how nice they are to this asshole, then suddenly get bored and smack me with you-know-exactly-what-you-did, it’s more harmful than being purposely deceived.

Autistics can’t read between the lines. We either believe exactly what we’re hearing, or we try to figure out what the NT is expecting, hinting at, have we missed something and if yes then what, is there a hidden message in the body language or tone of voice or the emoji the person used or didn’t, and so on. (Also, we do occasionally miss things, because everyone does.) NTs get angry with us, because they can’t read our small print, which is caused by its absence. So they make it up themselves, then react to that narrative, which we’re not allowed to ask about. 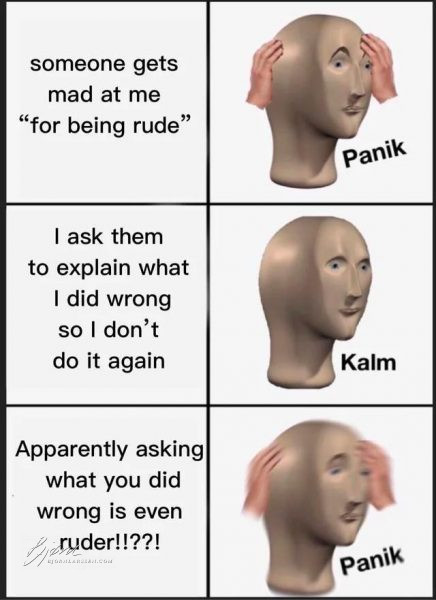 An ex-manager told me that my work was shit, but my colleagues liked me too much to admit the truth. I thought I was good at my job, that 2+2=4. I was wrong, though – it had always been 3, even though my colleagues would confirm it was 4. Apparently I wasn’t just bad, I was pitied.

I didn’t ask them – what’s the point in forcing them to lie? I lost faith in my judgement and instincts, sliding into a depression, then a burnout I never recovered from. It took years for me to understand what had actually happened.

Autistic people are easily abused, and some NTs know and use that.

There is a minor autistic celebrity. (This is not an extended subtweet, I don’t know this person and they don’t know me either. I actually know about all this from shocked neurotypicals.) There’s an anecdote they like to tell. This anecdote is deeply uncomfortable and unfunny even to me. The interviewers chuckle and nod, smiling, fake-understanding. Behind the celebrity’s back, others agree they’re an awful person, one that should be avoided. Then ghost them.

I don’t think anybody ever told that person “this makes people uncomfortable because X.” In fact, since the interviewers pretend it’s funny, they get positive reinforcement: this is a really good anecdote I should tell more often!

Speaking of subtweets, if you want to subtweet me you have to tag me, or I won’t get it.

I used to attend a sort of group therapy where we were encouraged to be radically open and honest about everything. It took me a long time to develop this sort of trust, because I’ve already learned that when I get really honest about my feelings people tend to take a step back, then another and another until we can no longer see each other. But this was a safe place where we were all kinda fucked up, and we shared anything and everything.

When my autistic burnout forced me to stop attending the sessions, I tried to keep in touch online, or invite people over. After a few variations on “so good to hear from you, I’m just so busy right now, I’ll get back to you ASAP!” (they did not get back to me ASAP) I understood there was no point in trying. Was I too open and too honest about something? Did they think I was making it up? I was clearly saying or doing something inappropriate, wrong, off-putting. In fact, years later, I might still be saying or doing it, because I never found out what it was. I probably never will.

I wonder if that celebrity actually did ask a neurotypical “do you think my anecdote is funny?” and the NT assured them it was hilarious, unfortunately they had to run now, but would get back to them ASAP.

The truth, it burns

Having two friends who’d never hurt me or desert me was like winning the lottery twice. I felt I could trust them with anything. And so, as I was awaiting the results of my autism assessment, I told one of them, B., about my fears.

B. was the kindest, warmest, most loving person I have ever met and haven’t married. “Nonsense,” they huffed. “Autistics have no feelings, they can’t love! You’re warm, you’re kind, you’re such a loving person!” They sounded offended by my words. I also knew that if I turned out to be on the spectrum, I wouldn’t be able to share it with B., because they weren’t simply ignorant.

The other friend is 1) mutual, 2) on the autism spectrum. They’re a sweet, outspoken, joyful, loving, kind, very lonely person. B. has known them for at least ten years, probably longer. Apparently this was what B. really thought about our friend. Unless, of course, it was a case of “I meant other autistic people.”

This was the only time I ghosted someone. I wouldn’t be able to withstand a mortified “I meant other autistic people.” It hurt more than most of my break-ups. It still does.

I was bullied as a kid. When I told the teachers, I was snitching. When I told my Mum, she said I should just ignore it. When I told my stepfather, he didn’t even try to hide his disappointment at my inability to defend myself. I didn’t understand why it was happening, only that other kids didn’t get bullied, so it had to be something about me.

When I received my diagnosis in February 2020, my instinctive reaction was “no.” I was the one who asked to be assessed, went through countless tests of all sorts, and already used coping strategies found on YouTube channels of other autistic people. Yet somehow, seeing it on paper meant my ultimate failure at “you don’t look autistic.” Lots of people are delighted when they get their diagnosis – it validates their struggles, helps them understand, obtain the resources they need. I didn’t want to need anything. No.

I knew enough autistic people (two) to understand they weren’t emotionless robots who were really good at counting matches. My head, however, went there – “other autistic people” weren’t like that. They were fine as they were. I was a failure – a freak, wrong, broken. If I didn’t understand something, I should ask – no, that was irritating I should know what others thought and felt, what I said and did, what the other person meant – no, I should accept that I was wrong, and search for the reasons why until I came up with the explanation why it was solely my fault. I should not only believe 2+2 was 3, but prove it.

It’s been over two years and so far I managed to understand this is a form of self-harm. I gather evidence that I am a bad person, discard anything suggesting I’m not, then fight against it, because nobody wants to think of themselves as a bad person. That constant internal war is more exhausting than masking. I don’t need therapy to deal with autism – I need therapy to deal with this.

What if someone did tell this celebrity their anecdote was disturbing, they shrugged, and went “too bad, I like it”?

It would be nice if April’s the month when I find autism acceptance inside myself.