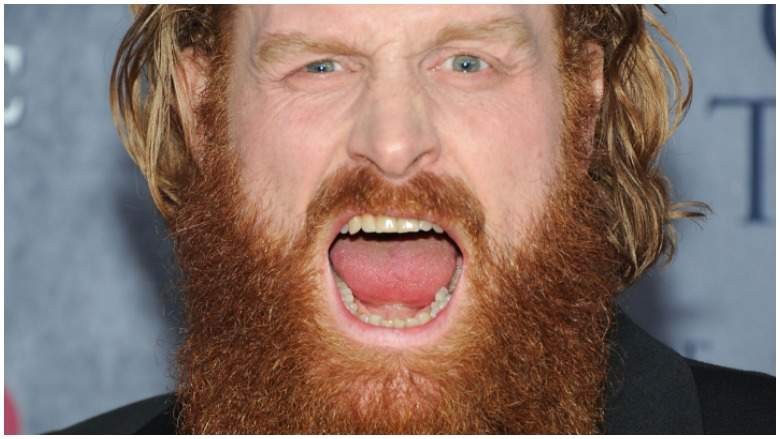 As Audthryth wrote for Our Troth:

One of Thor’s most important roles to me is the giving of strength and support. I know that in Heathen times he was sometimes referred to as ‘Father Thor’, and I have always assumed that it was because of the support and ‘fathering’ he gives, but I have only my personal experiences to support this belief. To me, Thor has always been one of the more approachable God/esses, especially when I need strength and support.

My experiences are identical. When it comes to the actual fatherhood, Thor’s wife, Sif gave him a daughter named Þrúðr (I will most probably anglicise this name as “Thrud” in the books), and his jötunn lover Járnsaxa bore him Magni and Móði.

Thor has sense of humour that’s very much unlike Odin’s twisted riddles of Loki’s self-amusement at cost of others. He is more of a locker room rugby player type when it comes to jokes. He could out-eat The Rock (I’d actually like to see that). When inviting Thor for dinner be aware that any food and drink you want to keep for later needs to be under lock and key. His favourite drink is stout, Guinness being a good choice. Generally, good luck getting him drunk, but if you manage, he’s going to be fun to be around, free from Odin’s bitterness or Loki’s… Lokiness. He is both trusting and trustworthy, which perhaps explains why so many of his adventures feature Loki as a companion. Thor doesn’t lie, unless he is forced to do so in order to win a battle against a cunning enemy.

Since Thor is too massive to sit on any horse, he travels in a chariot pulled by two goats. (Unsurprisingly, goats are his favourite animals.) In one of my favourite myths, Loki and Thor spend the night with a poor family with two children, who have nothing to eat to offer the guests. Therefore Thor slays the goats, telling the family that they are immortal and will be reborn in the morning, as long as the skins and bones remain untouched. Thjálfi, the son, can’t resist temptation to break one bone and suck out his favourite bone marrow, which renders one of the goats lame and causes Thor to become furious. To spare the family from Thor’s fury, Loki suggests that he takes Thjálfi and his sister Röskva to be his servants. Thjálfi is not at all unhappy and later takes part in some of their adventures. In Children of the Gods I have written his character as less of a servant and more of a step-son. This is because Thjálfi features quite extensively in the myths, especially in comparison with Magni and Móði, who get a grand total of two mentions, one of them being carrying Thor’s body after his death in Ragnarök.

In Children I use the myths featuring Thor quite extensively, including the one where he must put on a wedding dress to mislead King Thrymr into thinking he is marrying Freya (Thor says that no such thing ever happened, and even if it did, it was a very masculine wedding dress) and his fight with the giant Hrungnir. Hrungnir throws a whetstone at Thor, and when the hammer meets the whetstone, a chunk of rock embeds itself in Thor’s forehead. The only one who can remove it is a wise sorceress named Groa – I used this particular myth almost without changes, so I’m not going to spoil it for you.

It is Thor’s relationship with jötnar, known (a mistranslation that stuck) as ice giants, that I found the most interesting and which forms the core of the book. Not just Thor, but many other Gods have jötunn lovers. His lover, Járnsaxa, bore him Magni and Móði. At the same time, one of his main pastimes is killing, or perhaps killing off, the jötnar. One of the theories is that it was never Thor’s goal to dispose of them completely, but keep their numbers in check, just high enough for their survival and low enough for them not to pose danger. This did not make the jötnar any happier.

Almost all of the book is built around this strange conflict between the races. Magni, the son of one of the jötnar and their greatest enemy has grown in a place where his mother was seen both as a saviour and a traitor, and his father as, well, the one who wanted everyone dead. How does one create his own legacy and build his own life with parents and upbringing like that?

Thor’s hammer, Mjölnir, deserves its own introduction. For now I’m just going to say two things: 1) the most powerful weapon in the Nine Worlds always returns to its owner, and 2) I will be writing a series of stories and novellas called How to Be a God, one of which will explain how Mjölnir came to be, what it is, and what it represents. Carvings representing Mjölnir are the best known symbols of Norse heathenry. I wear a bronze Mjölnir pendant on my neck as a symbol of safety, strength, and having support when it’s needed. Thor won’t fight my battles, but he’ll be there when needed, and maybe one day I will write about an experience that confirmed his willingness to help.